Evolution of the Thanksgiving Proclamation

From Washington through Trump

A long evolution of the idea and meaning of Thanksgiving Day can be traced in Presidential thanksgiving proclamations. From being a call to participate in a day of solemn reflection and expression of thanks to a Supreme Being, the Thanksgiving Proclamation has evolved to evoke a distinctively American history and celebration of certain core values. (Jump to the list of proclamations)

Washington (in 1789 and 1795) and Madison (1815) proclaimed that there be a day of reflection and public thanksgiving for peace and abundance. Prior to that time and continuing afterward, days of thanksgiving had been observed in individual colonies and states. It was especially well-established as a family “domestic occasion” in New England. (Pleck, 775).

Lincoln’s second 1863 Thanksgiving proclamation began a national holiday tradition with a standardized date—the last Thursday in November. Lincoln called for a day of “thanksgiving and praise to our beneficent Father who dwelleth in the heavens” as well as “humble penitence for our national perverseness and disobedience.” Subsequent presidents followed Lincoln in specifying the "last Thursday."[1]

However, sometimes November includes five Thursdays, and in those cases Thanksgiving is always very close to Christmas. Merchants learned that most Christmas shopping was delayed until after Thanksgiving. In response to concerns that a “late” Thanksgiving would reduce consumer spending, Roosevelt, in 1939, proclaimed the observance to be on the fourth Thursday in November (November 23 vs Nov 30 for the last Thursday in 1939).

Not all states followed the national holiday, with nearly half observing the traditional “last Thursday” rather than the fourth. FDR’s controversial decision was codified by Congress in Joint Resolution signed by Roosevelt on December 26, 1941 (H. J. Res 41).

Starting about this time, the language of Thanksgiving Day Proclamations has evolved to remind citizens of American values and ideas, and of the event's direct link to the “first Thanksgiving” of Plymouth Colony.

In examining this evolving language, we contrast three periods in the history of the presidency: Lincoln through Hoover; FDR through Carter; and Reagan to the present. Altogether, as of 2018, there were 161 instances of Thanksgiving Day proclamations. Of those, 86 (or 53%) are after 1932.

However, after 1932, Thanksgiving Proclamations more strongly emphasize the “original” Thanksgiving of the Plymouth Colony and regularly instruct citizens to recall America’s unique commitment to values of liberty, freedom, human dignity, community, and democracy.[3] Rather than simply expressing gratitude for, and reflecting on, peace and prosperity, Thanksgiving Day became a celebration of a distinctive American history.

All, or nearly all, specific historical references (Plymouth, Pilgrims, Indians, Wampanoag, settlers, etc.) have been in proclamations from the post-1932 period.

This historical trend is illustrated in this graph, contrasting the average number of references to a Supreme Being with references to American history and values (based on our search terms). 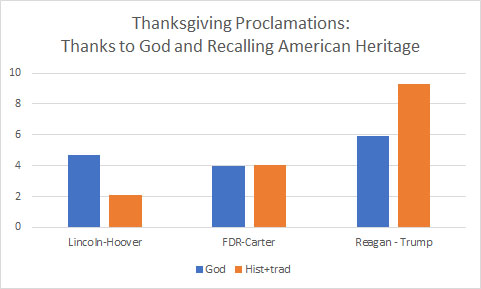 FDR Library, [nd]. “The Year we had Two Thanksgivings,” http://docs.fdrlibrary.marist.edu/thanksg.html

Pleck, Elizabeth, 1999. “The Making of the Domestic Occasion: The History of Thanksgiving in the United States.” Journal of Social History 32:4 (Summer): 773-789

[2] Containing text: almighty OR creator OR God OR "the Lord" OR divine OR "ruler of nations" OR "supreme author" OR "ruler of the universe" OR "giver of every good and perfect gift" OR "give Him thanks" OR "His benefits" OR providence OR "one greater than ourselves" OR "his bounties" OR "his protections" OR "Most High" OR "Giver of Good" OR "Giver of all things"

[3] Containing text: freedom OR equality OR liberty OR brotherhood OR justice OR heritage OR dignity OR "pursuit of happiness" OR "worth of man" OR "free elections" OR "national tradition" OR "ties of friendship" OR respect OR "bind us together" OR "bonds of fellowship" OR "duty" OR "our debt" OR "our gratitude" OR "sense of decency" OR compassion OR "needs of others" OR "binds us together" OR "our common blessings" OR Wampanoag OR Indian OR Native OR tribe OR Plymouth OR pilgrim OR settler OR colony OR forebears OR forefather OR " custom " OR tradition OR ancestor OR "history of our country"