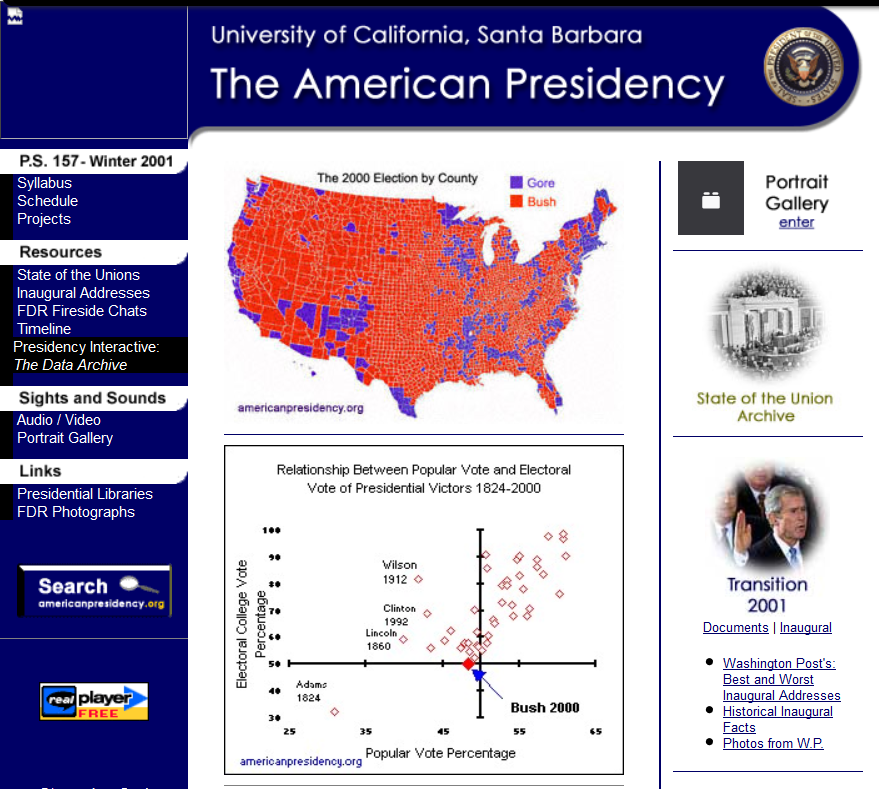 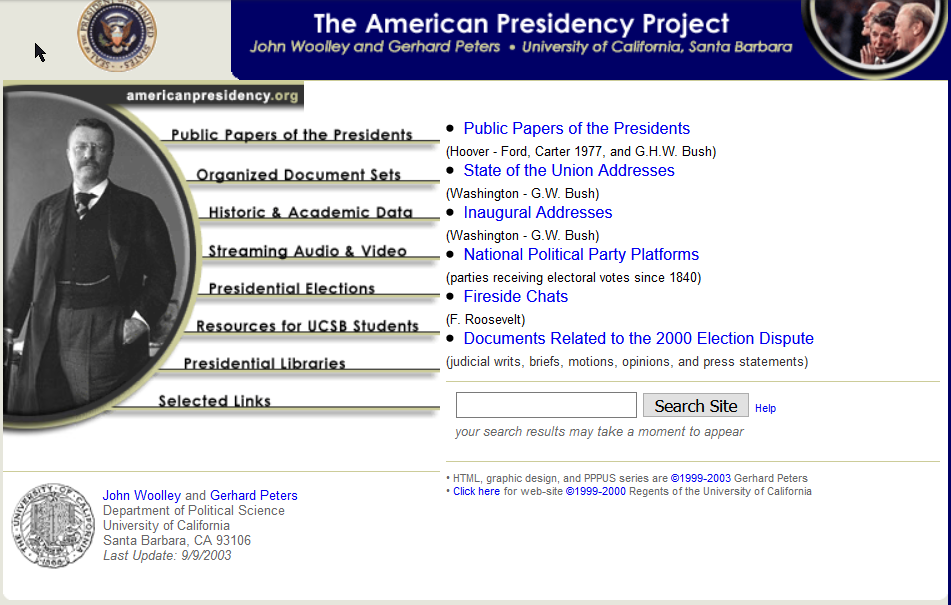 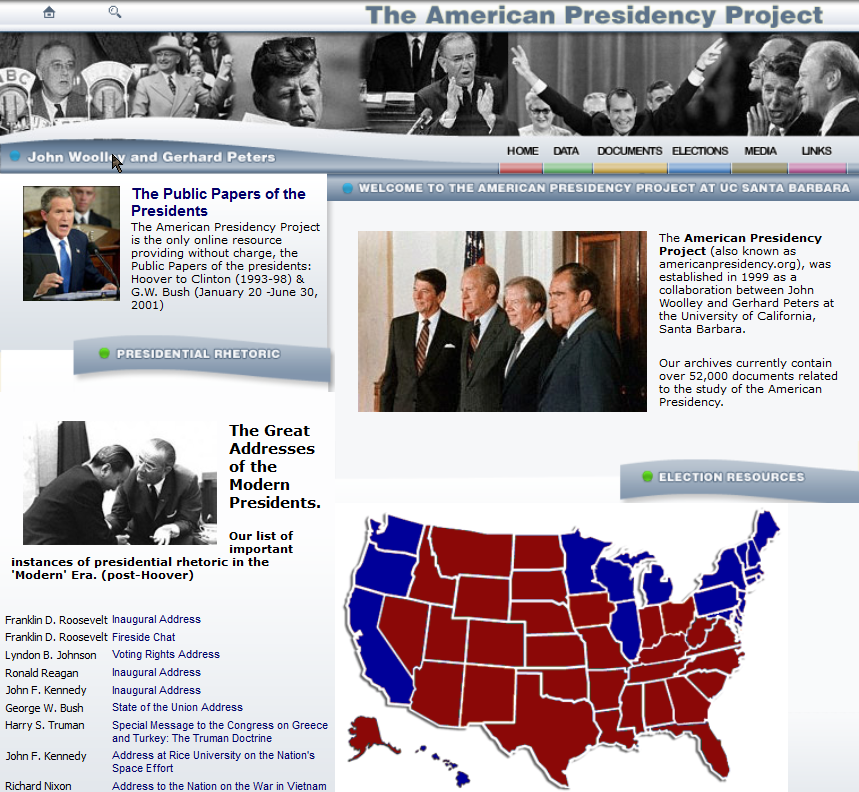 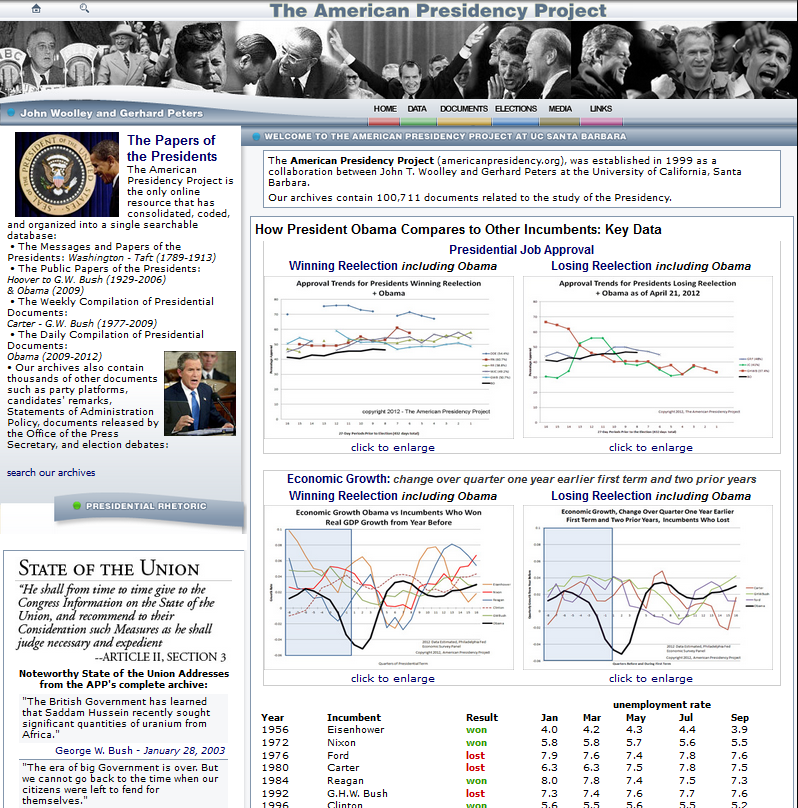 About the Presidency Project

The APP was launched in 1999 when then-graduate student Gerhard Peters joined with John Woolley to develop resources for students taking Political Science 157, The American Presidency.  As the resources in the course website expanded, it became obvious that it was being accessed by an array of general users outside the University.

Our goal today is to be recognized as the authoritative, non-partisan on-line source for presidential public documents.  By providing easy access to useful information, we seek to promote a more informed citizenry of the United States, high quality scholarly and media analysis, and a better understanding of American democracy throughout the world.

A few principles have guided us in developing the APP.  These began with our goal of providing a resource for college students, but these turn out to be useful for all kinds of users.

Search.  Users can search using user-defined words or phrases with restrictions as to president, dates, and document attributes.  Starting in late 2018, these searches can be quite long and complicated and are case-sensitive.  Users can browse through time-periods.

Inclusive. Our goal, still an aspiration, is to include all public presidential documents, related key historical documents, and basic statistics needed to study the presidency.

Analytical.  We provide introductory essays to many topics with historical background, descriptions of main trends, and cautions about interpreting data.

Our growth has been steady and our user base is now substantial. In the beginning, we were surprised to find that we had hundreds of visitors in a month. By mid-2016, on a high-volume day, we had over 100,000 users. We are regularly among the most-visited subdomains at UCSB. While around 80% of our visitors come from the United States, in any given month, we have visitors from 200 different countries and territories. Around 40% of our users are under age 34. Overall, according to Google Analytics, we are visited a lot by people Google classifies as political junkies, news junkies, techophiles, avid readers, and TV and Movie lovers. According to Google Books, the search phrase "American Presidency Project" returns over 30,000 items. The same search in Google Scholar returns more than 12,000 results, showing our reach among scholars.  In 2016 we posted the first White House Document that included an explicit reference to the APP, the May 11, 2016 press briefing. At some point, we will catalog instances in which media use the APP as a source or cite an interview with someone from the APP.

While we have been hosted by UCSB from the beginning, the APP has not received any oprating funds from UCSB to support basic management of the site--document acquisition, database organization, database management. In 2014, UCSB provided funds to support a thorough redesign of the site—the result of which you are looking at now.  This new website emerged from a collaboration among several UCSB entities: Enterprise Technology Services (project infrastructure and vendor contracts), Ocean o' Graphics (site redesign), Instructional Development (application programming), and Letters and Sciences Information Technology (legacy site maintenance and hosting).   All of us are proud of this accomplishment.
With our success has come donor support.  That support makes us extremely happy, and is essential to our ongoing operations.  All gifts are in principle tax-deductible.

Our sources include nearly every document from two canonical collections of Presidential papers: Messages and Papers of the Presidents of the United States ("Richardson"), and The Public Papers of the Presidents. On an ongoing basis, we update regularly from the materials provided by the White House media office, the Government Printing Office, and the National Archives (NARA). These include texts of presidential documents such as statements and remarks; press conferences; statements; Executive Orders; (some) memorandums; and Proclamations. They also include daily press briefings, statements from the Office of the Press Secretary, and print media pool reports. Virtually all of these documents are published as part of our collection. These documents are compared against other documentary sources such as the Daily Compilation of Presidential Documents and eventually the Public Papers. Any discrepancies are ultimately resolved in favor of the version provided in the Public Papers. We have also gathered additional documents not necessarily included in the two main collections from: The Weekly Compilation of Presidential Documents (Carter to G.W. Bush) Title 3 of the Code of Federal Regulations The Federal Register and a variety of Congressional compilations.

Category Within a Tree Structure

The fundamental distinction is between documents that represent events originally spoken out loud (most addresses, remarks, press conferences, interviews, etc) and Presidential written communications (statements, messages, orders, memorandums, letters, etc.). At some junctures a President may address the same moment both orally and in writing. For example, at the point of signing a bill, the President may make spoken remarks (sometimes called "a statement") and also issue something in writing (almost always called a "statement"). In spoken events, the APP distinguishes between those in which the president is the only speaker and those in which others speak as well. Among instances when the President is the only speaker, there is no hard and fast rule of classification applied consistently by the White House. In some instances a short, informal speech is called an "Address." We classify such events as "remarks," by far the most common kind of Presidential speech. It is important to be aware that historically an "Address" need not be spoken—see Tyler's "Address Upon Assuming the Office of President of the United States." As a general rule, we restrict the term "Address" to Presidential speech prepared in advance, delivered in a formal setting and not followed by any Q&A. In the era of electronic media, the speech may be directed "to the nation," with virtually no live audience. More commonly, an address is to a live audience, sometimes a Joint Session of Congress, typically preceded by some kind of "official" statement of welcome or introduction. An "address" may focus primarily on a single pressing topic or touch on many issues.

Our original search function starting around 2001 was provided courtesy of the Truman Presidential Library and was a fairly complex script for querying a mysql database. We have modified and extended that script repeatedly over the years. The original script had had many shortcomings. Two were particularly troublesome. There was no way to restrict a search to whole words, so a search for "war" will return any word involving the three-letter sequence "war" (of which there are nearly 600 in English). In that implementation of mysql queries, it was not possible to do true Boolean searching. Virtually all of the known shortcomings of the original script have been overcome in the new Drupal website that you are using now.  With great choice comes complexity.

Our background material is particularly useful as an introduction and guide to problems of understanding and using presidential documents. Among other topics, our essays cover: State of the Union Addresses and Messages, Executive Orders, Signing Statements. 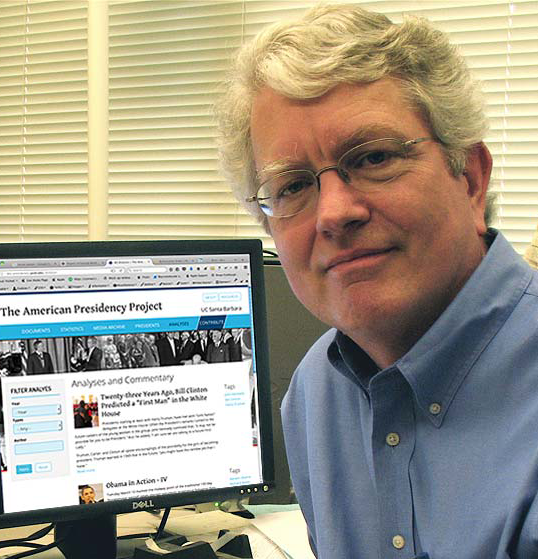 John Woolley is Professor of Political Science at UC Santa Barbara. For years, Professor Woolley's research has had two substantive foci. One is the American presidency. The other is US monetary policy and financial regulation.
Gerhard Peters is a professor of Political Science at Citrus College where he has taught full-time since 2007. He has served as lead instructor in study abroad programs since 2012, enriching students with unique academic experiences.