What They Are Reading in the States: President Biden's Bipartisan Infrastructure Deal is a Big Deal

Across the country, Americans continue to read, hear, and see why President Biden's Bipartisan Infrastructure Deal is a big deal. Through local newspaper stories, Cabinet Secretaries holding satellite media tours, or the President himself speaking one-on-one with a local news anchor, Americans in red states, blue states, big cities, small towns, farmlands, and more are learning how the Infrastructure Deal delivers a once-in-a-generation investment that will rebuild the nation's crumbling roads and bridges, expand access to clean drinking water and high-speed internet, and ensure the U.S. can compete in the 21st century.

See below for a sampling of the local coverage:

President Joe Biden sat down with Local 12's Kyle Inskeep Monday to talk one-on-one about the Bipartisan Infrastructure Deal. You can watch their full interview in the video above. 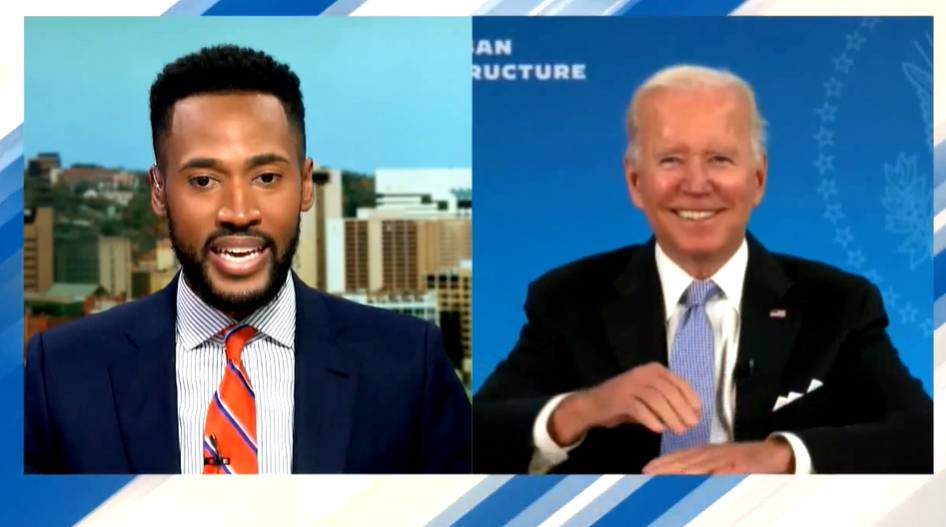 Biden said in an interview with WKRC-TV that he expected the Brent Spence Bridge, which carries traffic over the Ohio River and connects Cincinnati with Northern Kentucky, would get funding in the bill that the House passed last week and he is expected to soon sign into law. "You all are going to get in the state of Kentucky well over $10 billion," Biden said in the interview. "It's listed as one of the most notorious bridges in the country. And so my guess is that that's going to be the choice that your governors are going to make and want to get done. And we can get it done now."

Milwaukee Journal Sentinel: Funding to eliminate lead hazards, from paint to pipes, is in Biden's Build Back Better bill. Here's what that could mean for Milwaukee
[Talis Shelbourne, 11/9/21]

The bill allocates $30 billion under capitalization grants for full lead service line replacement projects; capitalization grants typically go into a 'state revolving fund' that provides low-interest loans to municipalities for addressing clean water measures. Of that $30 billion, $20 billion will be designated for use in "disadvantaged communities" and potentially 100% forgivable.

U.S. Sen. Richard Blumenthal called the bill "a gigantic breakthrough" that will open up funding for public works projects across Connecticut. U.S. Sen. Chris Murphy said it was "the biggest bipartisan investment in infrastructure in our nation's history." U.S. Rep. Rosa DeLauro, D-3rd, said the legislation is about "jobs, jobs, jobs."

The White House estimates that Texas will receive about $35.44 billion over five years for roads, bridges, pipes, ports, broadband access and other projects after federal lawmakers passed a long-anticipated national infrastructure bill on Friday.

Bridge Michigan: How the $1.2-trillion Biden infrastructure bill will be spent in Michigan
[Kelly House, 11/6/21]

KPIC Portland: What does Infrastructure Investment and Jobs Act include for Oregon?
[11/8/21]

Oregon can expect the bill to deliver:

Replacing lead pipes used for drinking water is just one piece of President Joe Biden's $1.2 trillion infrastructure plan that will soon become law, after months of political wrangling…. As the state with the most bridges, Texas alone will receive $537 million for bridge replacements and repairs over five years, and $27 billion for roads, according to the White House. Under the plan, the state would receive $3.3 billion to improve public transportation, $408 million to provide charging stations for electric vehicles and $100 million to help expand broadband service.

U.S. Rep. Lois Frankel (D-21) voted for the bill. She outlined what the funds will be used for in Florida:

The package is billions in new infrastructure spending. IIJA will help the state of Louisiana to become stronger and more prepared for disasters such as Hurricane Ida with funding for evacuation routes and restoring roads and bridges.

[Nevada] will receive $2.5 billion to build and repair highways and $225 million for bridge replacement and repairs over five years…. The funding will help Nevada repair the 28 bridges and more than 1,090 miles of highway that are in poor condition and have added to commute times — increased by nearly eight percent since 2011, the White House said in a release highlighting items in the package for the Silver State.

More than $8.3 billion in water projects alone earmarked for Western states will help pay for programs such as renting water from farmers to send down the Colorado River in extremely dry years, replanting and managing high country forests devastated by wildfires and recycling more water in cities, said Alexander Funk, director of water resources for the Theodore Roosevelt Conservation Partnership.

Colorado Public Radio: Colorado is getting around $1 billion from the federal infrastructure bill for transportation projects
[Nathaniel Minor, 11/8/21]

The federal infrastructure bill Congress passed last week will send an estimated $700 million to $850 million in new money to Colorado for transportation projects over the next five years…. That infusion will be used to speed up completion of the state's 10-year plan of more than 400 projects, including thousands of miles of rural road repaving and the repair and expansion of decaying and congesting highways like Interstate 70 at Floyd Hill and Interstate 270 in Commerce City.

Among the funds earmarked in the bill, here's what Arizona can expect to receive over the next five years:

The Biden administration said in August that Minnesota would get the following:

For Minnesota, there will be more than $5-billion for road, bridge, and public transit improvements. There will also be tens of millions for broadband, which is expected to have a major impact on the state's rural communities.

The bill will pour billions of dollars into projects in states across the country, including Iowa. The bill gives Iowa $3.4 billion to repair highways, $482 million to repair bridges, $638 Million to improve water infrastructure, $300 million for public transportation, $120 million to upgrade airports and at least $100 million to expand broadband in the state.

Aging infrastructure in the D.C. area, including roads in need of repair and public transit issues, could soon receive much needed fixes with Congress' passage of a $1 trillion infrastructure package…. Maryland Gov. Larry Hogan put out a statement Saturday addressing the bill. "This bill will put America's infrastructure on the right track to grow jobs and make our economy competitive for the twenty-first century without raising taxes or adding to the debt," the statement reads.

[Maryland] is set to receive as much as $6 billion dollars to improve upon roads, bridges, transit systems, and even tackle climate change. Money will also go toward the restoration of the Chesapeake Bay and expanding the use of broadband internet and clean energy.

KSDK St. Louis: What the infrastructure bill will do for Missouri and Illinois
[Justina Coronel, 11/8/21]

Missouri will receive around $8 billion and Illinois around $17 billion. A big chunk of money will help repair roads and bridges. In Missouri, there are nearly 2,190 bridges and over 7,576 miles of highway in poor condition. About $6 billion will go toward highway repairs and another $480 million for bridges…. Meanwhile, $674 million will help to modernize public transit.

According to Axne's office, Iowa will get about:

Joseph R. Biden, What They Are Reading in the States: President Biden's Bipartisan Infrastructure Deal is a Big Deal Online by Gerhard Peters and John T. Woolley, The American Presidency Project https://www.presidency.ucsb.edu/node/353325