What They Are Reading in the States: President Biden Highlights Support for Veterans & Unity Agenda in Texas

News outlets across the state of Texas are reporting about President Biden's trip to Fort Worth where he highlighted a key part of his Unity Agenda: keeping our promise to our nation's veterans.

During the trip, President Biden and Veterans Affairs Secretary Denis McDonough visited the Fort Worth VA Clinic where they spoke with veterans, caregivers, and survivors about addressing the health effects of environmental exposures, such as burn pits. The President later delivered remarks at the Tarrant County Resource Connection on expanding access to health care and benefits for veterans affected by exposure to harmful substances, toxins, and other environmental hazards. He also discussed his Administration's actions to address these issues, including a new proposed rulemaking to consider adding certain rare cancers to the list of those presumed to be service connected. And he called on Congress to send him legislation that ensures we honor our commitment to veterans exposed to toxic substances.

Read a sampling of the coverage below 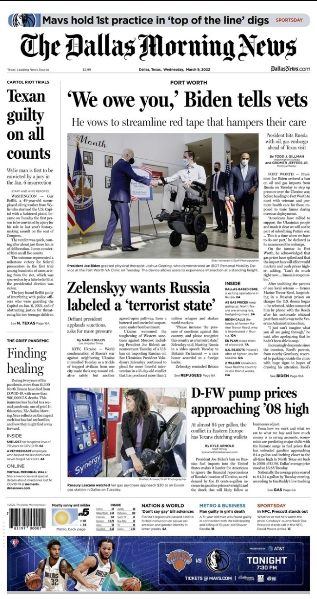 Houston Chronicle: In Fort Worth, Biden promises veterans timely care, compensation for burn-pit related illnesses
President Joe Biden told hundreds of veterans here Tuesday that he's determined to make sure 9/11-era soldiers exposed to toxic burn pits don't suffer the indignities that Vietnam veterans had to go through to prove their illnesses were related to Agent Orange exposure. "I refuse to repeat the mistake when it comes to veterans of our Iraq and Afghan wars," Biden told the veterans after touring the Fort Worth VA Clinic. Biden outlined how the federal government has increased funding for research into toxic exposure and sped up the process of identifying cancer among veterans and determining whether they are related to burn pit exposure. He said a big priority is making sure veterans don't suffer in limbo for decades waiting for claims to be processed, something many have complained about. "When the evidence doesn't give a clear answer one way or another, the decision we should favor is caring for our veterans. Not waiting," Biden said during what was his second visit to Texas since he took office in 2021. "We owe you," Biden told the veterans in the crowd.

KDFW (Fox Fort Worth, TX): Biden arrives in Fort Worth as he seeks more health care for veterans
President Joe Biden has arrived in North Texas as he plans to talk with veterans and their caregivers and push for more help for members of the military who face health problems after exposure to burn pits. […] Biden will call on Congress to send him a bill that protects veterans who face health consequences after burn pit exposure. The House last week passed a bill that would provide VA health care to millions of Iraq and Afghanistan veterans who meet that criteria.

KTRK (ABC Houston, TX): President Biden addresses burn pits and veterans' health care during trip to Fort Worth today
President Joe Biden visits veterans in Fort Worth today. His focus lands on toxic burn pits and other environmental hazards that can harm veterans' health. The issue has been very personal to the president since his late son, Beau Biden, died. Biden has said he suspects Beau's exposure to burn pits in Iraq contributed to him developing deadly glioblastoma. […] If passed into law, it would increase spending by more than $300 billion over the next decade, according to the Congressional Budget Office.

KTVT (CBS Fort Worth, TX): Biden to address burn pit exposure on Texas trip Tuesday
President Joe Biden is expected to travel to Fort Worth, Texas Tuesday. He is scheduled to speak with veterans, caregivers, and survivors about addressing the health effects of environmental exposures such as "burn pits", areas used to burn hazardous waste and material during the war in the Middle East. White House Director of Message Planning Meghan Hays said Biden will be joined by a bipartisan group of lawmakers and Republican Fort Worth Mayor Mattie Parker. The scheduled trip comes exactly one week after the Texas primary election and President Biden's State of the Union address. In the March 1 speech, Biden called on Congress to pass a law to "make sure veterans devastated by toxic exposures in Iraq and Afghanistan finally get the benefits and comprehensive health care they deserve." […] Hays says the trip is part of the President's Unity Agenda for the nation. "This is incredibly personal to the president," said Hays. "He is a military family. He lost a son to cancer. The treatment that the VA provides folks is of the most importance and is very near and dear to his heart."

WFAA (ABC Dallas, TX): What are burn pits? Explaining a key aspect of Biden's visit to North Texas
President Joe Biden visits North Texas on Tuesday, and he'll have a main issue on his agenda: Addressing the effects that burn pits have had on veterans. Biden is visiting the Fort Worth VA Clinic and Tarrant County Resource Connection center, where he'll speak with veterans about "the health effects of environmental exposures such as burn pits," White House officials said this week.

WBAP (News Talk Dallas, TX): President Biden Meets With Veterans in Fort Worth
The President's agenda had him speaking with veterans, caregivers, and survivors about addressing the health effects of environmental exposures such as burn pits. The President stopped by the Fort Worth VA Clinic to receive a briefing on their primary care and specialty health services for veterans.

Associated Press: 'The best of us': Biden promises improved care for veterans
President Joe Biden on Tuesday said U.S. veterans were the "backbone, the spine, the sinew" of the nation, as he pushed for better help for members of the military who face health problems, including after exposure to burn pits. "You're the best of us," Biden said. For the president, the issue is very personal. In last week's State of the Union address, Biden raised the prospect of whether being near the chemicals from pits where military waste was incinerated in Iraq led to the death of his son Beau. "We don't know for sure if a burn pit was the cause of his brain cancer, or the diseases of so many of our troops," Biden said in the speech. "But I'm committed to finding out everything we can."

CNN: Biden arrives in Texas to work on an issue that hits close to home
President Joe Biden is in Fort Worth, Texas, on Tuesday to meet with veterans and discuss a newly proposed federal rule that would add certain rare respiratory cancers to the list of disabilities that are considered to be connected to military service. It's an issue that hits close to home for the President. Biden has said he believes burn pits may have caused the brain cancer that killed his son Beau -- an Iraq War veteran who died in 2015 -- but has noted he "can't prove it yet." Biden has vowed to fund research on the long-term effects of burn pit exposure. Beau Biden's cancer would not be covered by the proposed rule, but the President has made clear that supporting veterans and fighting cancer will be a key part of his administration's agenda. […] On the trip so far, Biden has spoken with veterans, caregivers and survivors about several issues, including addressing the health effects of environmental exposures such as burn pits. He visited the Fort Worth Veterans Affairs Clinic to receive a briefing, and later he will round out his trip by delivering remarks "on expanding access to health care and benefits for veterans affected by environmental exposures during military service," the White House says.

Hill: Biden outlines new benefits for Iraq, Afghanistan veterans exposed to burn pits
President Biden on Tuesday traveled to Texas to discuss expanding benefits for veterans exposed to toxic chemicals from burn pits. […] He called on Congress to pass a law to ensure care for veterans exposed to toxic chemicals while serving in Iraq and Afghanistan. And, he announced a new rule that will add several rare respiratory cancers to the list of presumptive conditions for certain veterans. […] Biden said his administration is building a more comprehensive database that will help officials get a better picture of which veterans were exposed to burn pits or other toxins. And he urged veterans to sign up for the VA burn pit registry.

NBC News: Biden heads to Texas to push for better care for veterans exposed to burn pits
President Joe Biden is scheduled to travel to Texas on Tuesday to push for better benefits for veterans experiencing health complications after being exposed to burn pits in Iraq and Afghanistan. Biden, who is scheduled to be joined by Secretary of Veterans Affairs Denis McDonough, is set to visit a clinic in Fort Worth and deliver remarks on "expanding access to health care and benefits for veterans affected by military environmental exposures such as burn pits," according to the White House.

New York Times: In Texas, Biden Says New Legislation Could Expand Benefits for Burn Pit Victims
President Biden called on Tuesday for the broad expansion of health benefits for veterans, particularly those who fell ill after breathing in toxic materials from burning waste in the Iraq and Afghanistan wars, exposure that he believes contributed to the cancer that killed his elder son, Beau. […] Proving a link between toxic substances in war zones and subsequent illnesses suffered by veterans has been politically onerous for lawmakers and prohibitively expensive for many who fall ill. But activists who have fought for benefits for years see a champion in Mr. Biden, who has long speculated that toxic substances from burn pits contributed to the brain cancer of his son. The younger Mr. Biden, who died in 2015, served in Iraq as a member of the Delaware Army National Guard.

Politico: Biden again emphasizes help for veterans
President Joe Biden on Tuesday traveled to Fort Worth, Texas, to advocate for veterans — an issue that hits close to home. The president, speaking at the Tarrant County Resource Connection, met with veterans and their caregivers and called for better health care for service members who face health problems potentially linked to burn pits, which were used during the Iraq and Afghanistan wars to dispose of war wastes, including things like metals and jet fuel.

Reuters: Biden heads to Texas to highlight toxic health risks for veterans
President Joe Biden travels to Texas on Tuesday to highlight the exposure of U.S. service members to toxins in war zones that can later result in serious health problems, like the cancer that killed his son and for which he blames Iraqi burn pits. […] He will deliver remarks on the administration's efforts to address the problem, including a proposed rule to consider adding certain rare cancers to the list of those presumed to be connected to military service. He also will urge Congress to help veterans facing those difficulties.

Joseph R. Biden, What They Are Reading in the States: President Biden Highlights Support for Veterans & Unity Agenda in Texas Online by Gerhard Peters and John T. Woolley, The American Presidency Project https://www.presidency.ucsb.edu/node/354834