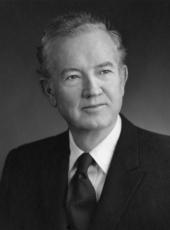 I have just heard the statement made by Governor Stevenson and I concur completely in the thoughts that he expressed in that statement. I have campaigned vigorously during this entire campaign. I have no regrets over the outcome.

The American people have spoken and I concur fully with their choice always. I'm a great believer in this democratic system that we have in our Government.

I'm a great believer in the necessity of our presenting a united front. I believe in America, in its greatness and in its ability to discharge its responsibility of world leadership.

I shall certainly do my best to cooperate with General Eisenhower and his Administration in making it possible for our Government to discharge fully its responsibility.