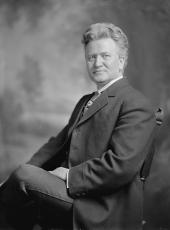 The election of Calvin Coolidge by a landslide is apparent from the returns now in. The American people have chosen to retain in power the reactionary Republican administration with its record of corruption and subservience to the dictates of organized monopoly.

The Progressives will not be dismayed by this result. We have just begun to fight. There can be no compromise on the fundamental issues for which we stand. The loss of this one battle in the age long struggle of the masses against the privileged few is but an incident.

I call upon all Progressives to close ranks and gird themselves for the next battle. We have not been defeated, but overwhelmed for the time being by the use of slush funds, intimidation, technical obstruction and abuse of power in securing a place for independent electors on the ballot and in the count and return of the vote.

Until more complete returns are available, it is impossible to forecast what the reaction of this result will be upon the Progressives with regard to the future. But in so far as I am personally concerned, I am enlisted for life in the struggle to break the combined power of the private monopoly system over government and to restore it to the people.