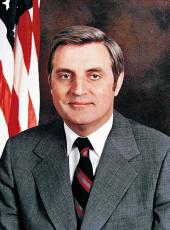 Over the past several weeks, we have been hearing a drumfire of propaganda out of Tehran, some of it from people calling themselves students, some of it from the government-controlled radio and television in Iran, and some of it from various officials or people in authority. The message is very clear. It says over and over that the world and the American people should ignore the hostages, forget about the innocent people bound hand and foot, overlook the continued outrage to law and standards of human behavior. We are told to forget all that and focus on the hatred of one man. We are not going to forget, and the American people are not going to get their priorities confused.

How are our hostages being treated? The facts are there for all to see, and the simple fact is that 50 human beings are being held at inhuman conditions, contrary to all civilized standards, in order to prove a political point. They are not permitted regular visitors. They are isolated and not allowed to speak, except to their captors. As far as we know, the hostages have not been allowed to receive mail or messages. There has never been a systematic accounting of the numbers and welfare of the hostages.

The so-called students have not permitted any outside observers even to see these people for 10 days. They are refusing to let international organizations, such as the Red Cross, into the compound. They refuse visits by religious organizations. They refuse representatives of neutral states. Even prisoners of war are guaranteed certain standards of human treatment. But these standards are being dragged in the dirt every day by a group of kidnapers, with the acquiescence of the government.

We are hearing daily propaganda about the alleged crimes of our people in Tehran, most of whom volunteered to serve their country at a difficult and dangerous time. We are not and will not respond to that propaganda.

I would note that one of those being held as a so-called spy in Tehran is, in fact, a private American citizen who simply happened to be visiting the Embassy on business at the time of the attack on November 4. It was many days before we even learned, indirectly, that he was being held. That man, like the rest, has now been held for 31 days—tied up, denied contact with his family, denied exercise, denied access even to the comfort of religion.

We hear a great deal about the crimes of the Shah, but that is not the issue. The issue which disturbs the American people is that 50 of our fellow citizens are being abused, in violation of international law. These are our brothers and sisters.

Yesterday, the United Nations Security Council passed a resolution which called—as the first most important priority, as it should—for the release of the American hostages. That is the issue. It is the only issue, and we're not going to forget they must be set free.

Note: The Vice President spoke at 12:01 p.m. to reporters assembled in the Briefing Room at the White House.

Walter F. Mondale, Remarks by the Vice President on the Treatment of American Hostages in Iran Online by Gerhard Peters and John T. Woolley, The American Presidency Project https://www.presidency.ucsb.edu/node/247934