My name is Martin O'Malley, I am running for President, and I need your help. Tonight I would like to talk with you about the American Dream that we share. You and I are part of living, self-creating mystery called the United States of America. We've been given a gift—not an old car to be tossed aside and traded in when we are done with it—but a country. We must accept this gift with an open mind, and an open heart, if we are to give it to our children and grandchildren in a stronger and healthier condition than we received it ourselves. Make no mistake about it, our ability to give our children a better future depends on the strength of our country. 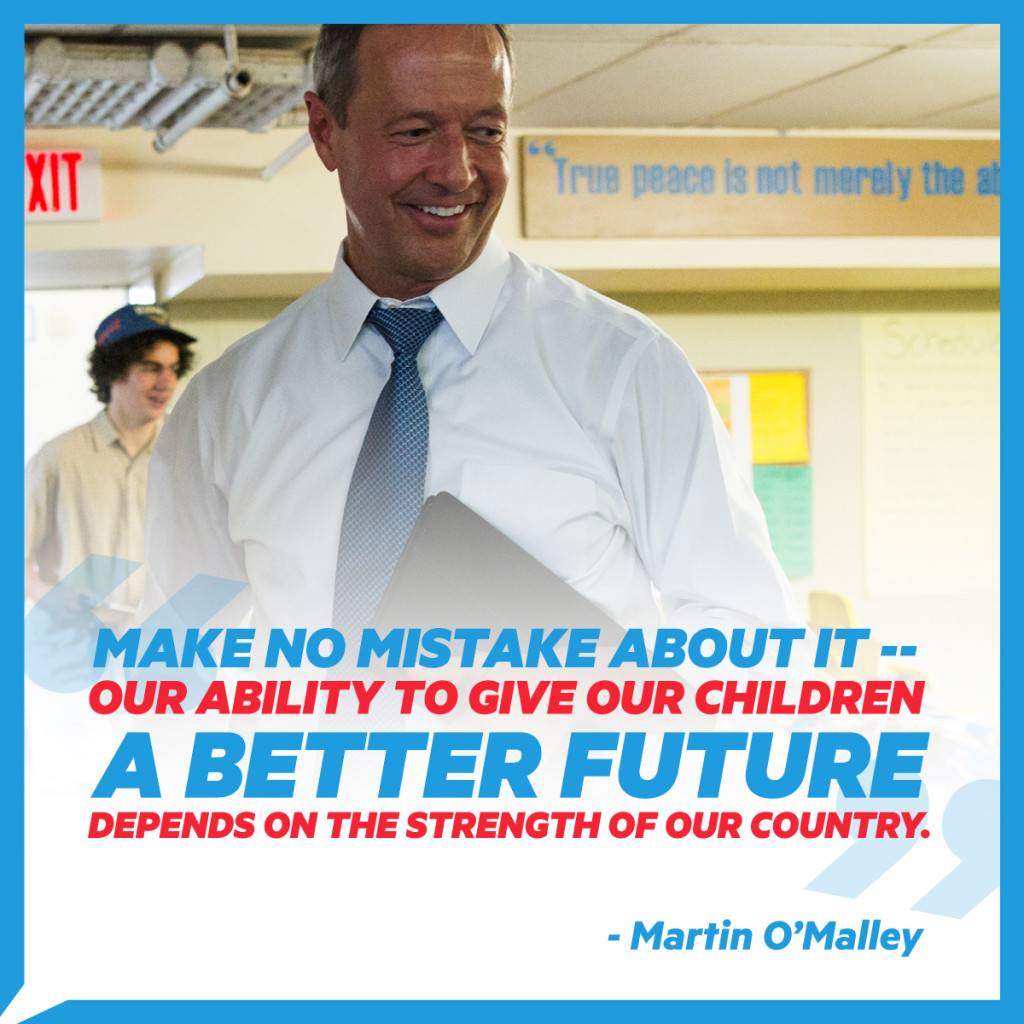 Let me ask you all a question: how many of you firmly believe that you've enjoyed a better quality of life than your parents and grandparents? Raise your hands...

Second question: how many of you believe just as firmly that your children and your grandchildren will enjoy a better quality of life? Raise your hands...

That, my friends, is the question at the center of our table of democracy. Whether we are still that country where regardless of where you start, through your own hard work and your own talent and your own love of family, you can still get ahead. Whether we are still that nation that finds a way in every generation to include more and more of our people more fully in the social, economic, and political life of our nation.

FDR told my grandparents in their day, not to be afraid. John Kennedy told my parents that to govern is to choose. I say to you that progress is a choice. 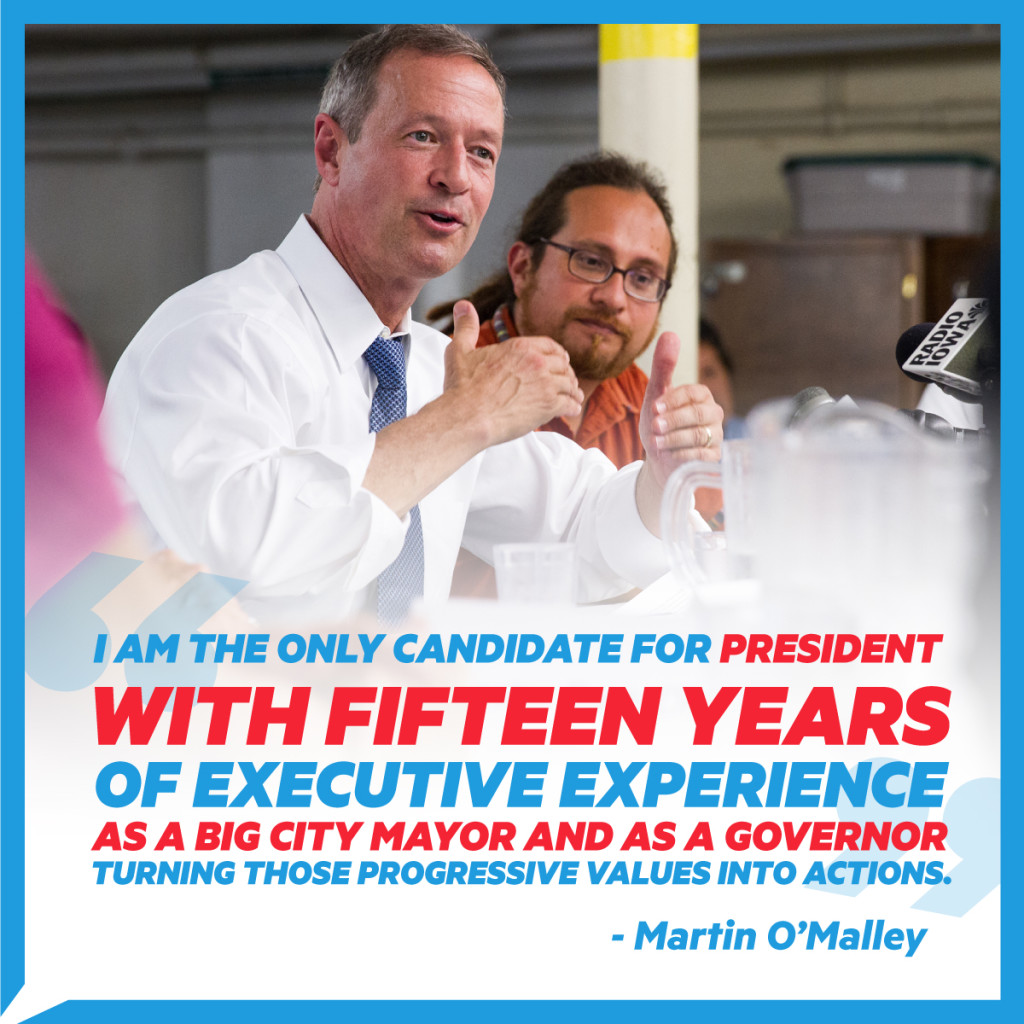 In Baltimore, we took action to save lives by reducing record high violence to record lows. We increased drug treatment to free thousands of our courageous neighbors from the scourge of drug addiction. In Maryland in the face of the recession, we took action to raise the minimum wage, to create jobs, and to make our state #1 in Innovation & Entrepreneurship. Driver's licenses for new American immigrants, marriage equality, and a ban on assault weapons: and we didn't just talk about it, we actually got it done. 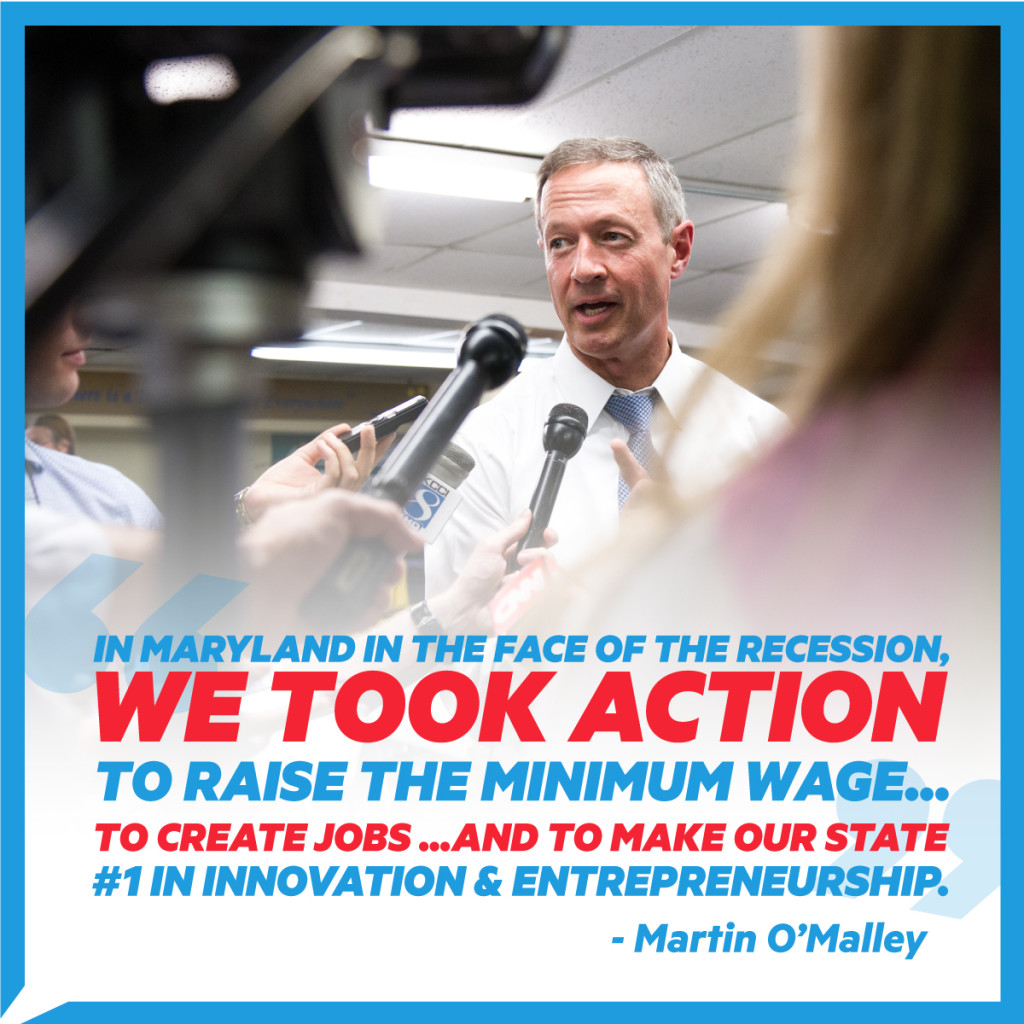 We took greater action, not less, to make our public schools #1 in the country. We took action to freeze college tuition four years in a row in order to make college more affordable for more families. We fought for the DREAM Act and won, and we expanded family leave because when women succeed, America succeeds! 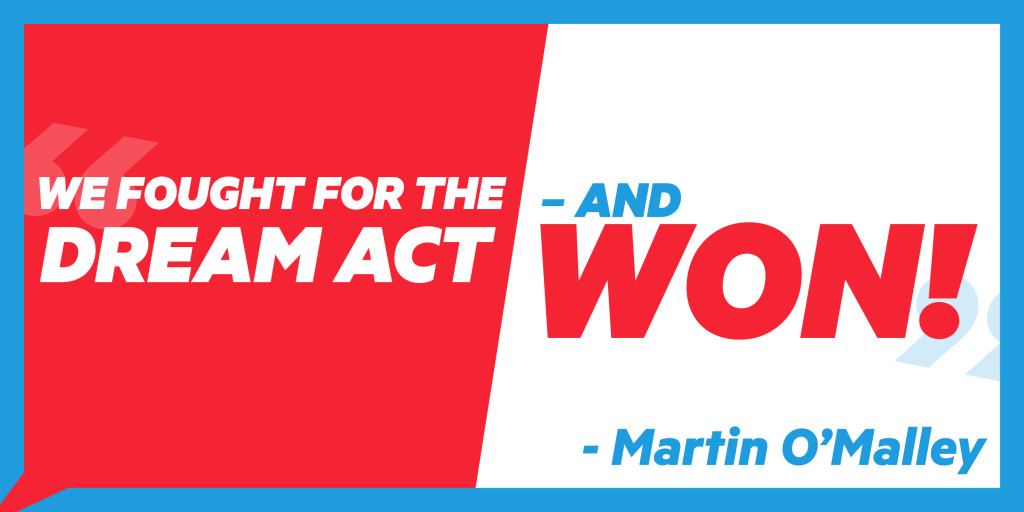 As a nation, we have come a long way since the Wall Street crash and the Bush recession of 2008. As our country teetered on the brink of a second Great Depression, we elected a new president in Barack Obama to move us forward, and that is exactly what President Obama has done.

Sixty-four months in a row of positive job creation: our country is clearly doing better, but most American families are not. The hard truth of our times is this: seventy percent of us are earning the same or less today than we were twelve years ago, and that is the first time that has happened this side of World War II.

There is a growing injustice in our country, an economic inequality that threatens to tear us apart. Wealth and power have been so concentrated in the hands of so few that it is actually taking opportunity out of the homes and the neighborhoods of the many. And make no mistake about it, this did not happen by accident. Powerful, wealthy special interests have used our government to create in our own country an economy that is leaving a majority of our people behind. The promise of the American Dream is on the ropes, and most days—you know this Dave Loebsack—in this obstructionist Republican Congress, it's not even a fair fight.

Fifty years ago, the nation's largest employer was GM. And the average GM employee could send a kid to college for the equivalent then of two weeks' wages. My father, like so many of his generation, went to college only because of the G.I. Bill. But today, we are saddling our graduating kids with more college debt than any developed nation on the planet.

Meanwhile, as wages flat line or decline for most of us, family-owned businesses and farms are finding it harder and harder to compete with ever-larger concentrations of corporate power and monopolies. Get this: last year, Wall Street bonuses alone totaled twice what every American working at minimum wage earned combined. Tell me how it is that not a single Wall Street executive was convicted of a single crime related to the 2008 meltdown? Not a single one. What have we come to as a nation that you can get pulled over for a broken taillight, but if you wreck the nation's economy you're untouchable? Main Street struggles, while Wall Street soars. This is not the American Dream, this is not how our economy is supposed to work, and this is not how our country is supposed to work! We can do better!

We must return to our true selves. Our economy isn't money. Our economy is people, all of our people. A stronger middle class is not the consequence of economic growth; a stronger middle class is the cause of economic growth. Therefore, we must take actions that actually lift incomes and wages again for all Americans. Can we all agree that no American family who works hard and plays by the rules should have to raise their children in poverty? So let's take action to raise the minimum wage to $15 an hour wherever and however we can. Let us return to the economic justice of paying overtime pay for overtime work and expanding Social Security. Let's make it easier and not harder for any worker to join a labor union and collectively bargain for better wages. 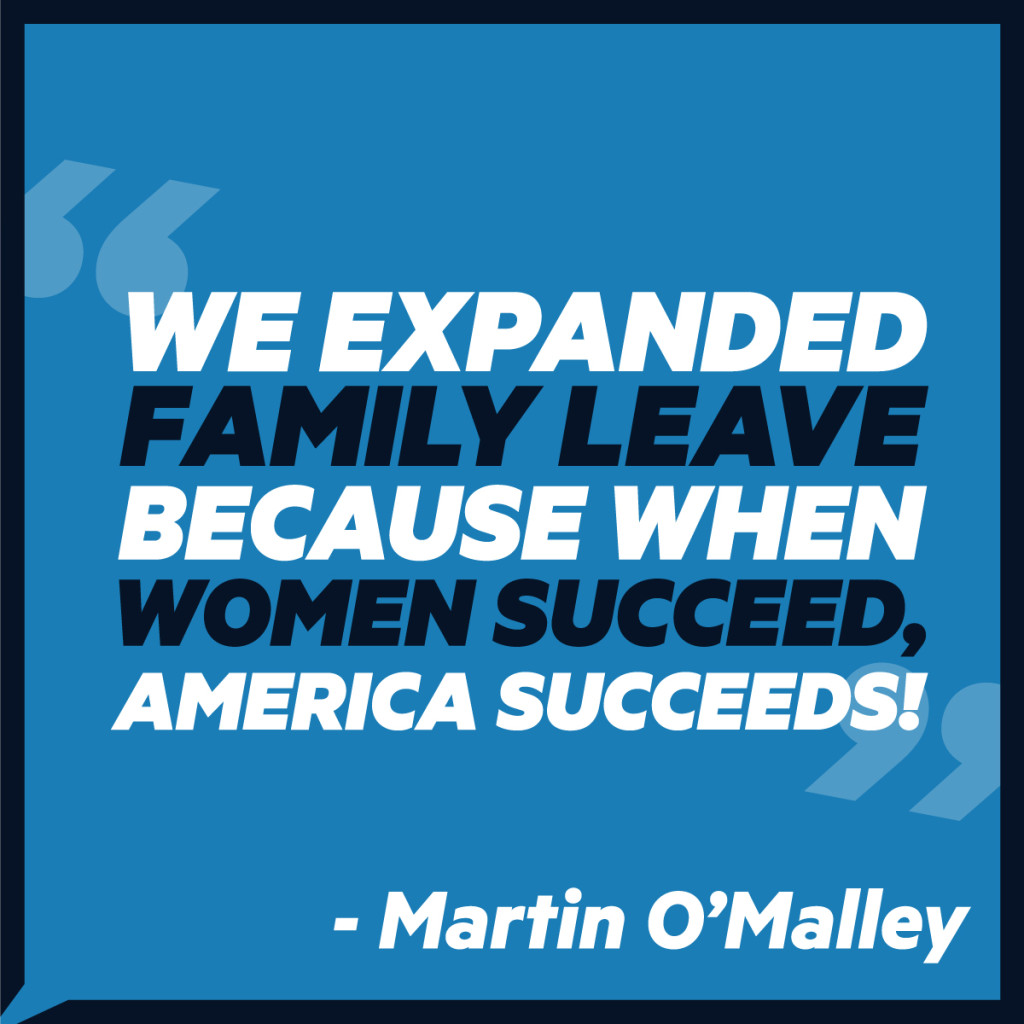 A new era of American progress calls for a new agenda to rebuild our cities as places of justice and opportunity. It calls for a new national security strategy and new alliances that are more forward-seeing and more forward-acting to reduce threats. What's more, a new American era of progress calls for a cleaner, greener, renewable energy future. I am the first candidate, but let's hope I am not the last, to call for moving America forward by 2050 to a 100% clean-powered electric grid for the good of our country, creating good jobs and creating more opportunity.

None of these things happen by chance; they do not happen by accident. To get wages to go up there's another thing we need to do, and that is to get 11 million of our neighbors out of the underground economy and into the open light by passing comprehensive immigration reform.

There are also a couple of things that we need to stop doing, as a party and as a country. Among them, giving a free pass to the bullies of Wall Street. We must reinstitute Glass-Steagall, and we must reinstitute it today. We must prosecute financial crimes, and if a bank is too big to fail, too big to jail, and too big to manage, then it's too damn big and it needs to be broken up before it breaks us up.

We must also stop sending American jobs and profits overseas with bad trade deals like the Trans-Pacific Partnership. Many of you remember the return on NAFTA. It was nada. We traded away good manufacturing jobs like Maytag's there in Newton, and in return, we got back empty promises and empty pockets. I am fundamentally opposed—as an American—to secret trade deals that our Congress is forced to vote on before we're even allowed to read them.

Your Republican governor, Terry Branstad, has shown us the direction their party would take us: cutting taxes for big corporations, and then telling you that Iowa doesn't have the money to invest in your own children's education. Well, welcome to today's Republican Party. They once had leaders and visionaries: Lincoln, Eisenhower. Now they create traffic jams and dismiss science.

Now the leading candidate for president is Donald Trump. After his racist, hate-filled comments—true story—The Los Angeles Times ran a headline, and I quote: "Republican Field Divided on Donald Trump's Comments about Mexican immigrants." Divided? As in, not sure he's wrong? If Donald Trump wants to run on a platform of demonizing immigrants, then he should go back to the 1840s and run for the presidential nomination of the Know Nothing Party!

My friends, I leave you with these final thoughts: in this summer of anger and frustration and discontent, if you become doubtful about our country's better future, just talk to her young people. You will seldom find among them a climate change denier, someone who wants to discriminate against gay couples, or someone who wants to bash immigrants.

The poet laureate of the American Dream, Bruce Springsteen, asked once:

Or is it something worse?

Whether that dream is made true again for all of American families or not is not up to the big banks, it's not even up to big money trying to take over our elections, it's really up to you and me. It is about whether we still have the ability as a people to move our country forward. You have a vital choice to make and I need your help.

After this election's over, when a child with a world of learning in front of him asks you who you voted for, I want you to be able to tell that child, "I voted for you."

When you see a dad sweating through another long shift in order to give his daughter a better future, I want you to be able to tell him, "I voted for you."

When you see a mom working long hours at two jobs for the dream of sending her son to college, I want you to be able to tell her, "I voted for you."

When you see a young father who hungers for a job to feed his family, I want you to be able to tell him, "I voted for you."