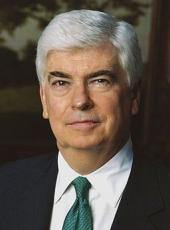 Former US Senator from Connecticut

Thank you, Iowa - thank you.

I want to congratulate the other candidates for running a spirited campaign representing the best of what we stand for as Democrats and Americans.

This evening Democrats sent a clear message that this party is united in our belief that our nation needs change to restore our security, our Middle Class and all that makes this country great.

Our campaign has been about results. And even though tonight we didn't get the result we all were hoping for, this experience has been one of the most rewarding in my life of public service.

It was 47 years ago this month that I was seated with my family on the East Front of the United States Capitol in the bright winter cold and heard President Kennedy ask all Americans to be a part of something larger than ourselves.

It was a moment every American took part in. A moment that changed us as individuals and as a country.

For a generation of us, that moment fueled a hunger to answer the call of our President.

A hunger to make a difference.

A year ago, announcing my campaign at the Old State House in Connecticut where the first written constitution guaranteeing the right to representative government was enacted, I spoke about the need for just such a moment again - for our next President to renew that call.

Despite the results this evening, I still believe that is true.

I always knew this endeavor would be an uphill battle against very tough odds.

But just as I have learned again and again in my life - from that day with my family...to my two years in the Peace Corps...to my 26 years in the United States Senate:

Only when you try can you truly make a difference.

And that, my friends, we did.

While we came up short in the race for caucus votes tonight, our campaign has more than kept pace in the race of ideas.

By raising ideas no other Presidential candidate has ever proposed, let there be no doubt that this campaign has set the standard.

When we began this race, every Democrat was for ending the war in Iraq - a war that has made us not more secure, but less so.

But it was only when we stood up and said this President wouldn't get another penny to fight that war that other candidates committed to doing what was necessary to actually end it.

When we began this race, every Democrat - every American - agreed that in America, we should never need a national crisis to bring the country together with national purpose.

But it was only when I stood up and you stood with me - it was only when tens of thousands of Americans stood together and said we would do whatever it took to stop this President from shredding the rule of law - that we actually did stop him.

And that fight goes on.

Whether it is restoring the Constitution to the American people, standing up to this President to end this war, or starting the discussion about what it will really take to tackle global warming and bring the country together, we stand confident that the difference we made in this race will endure longer than any speech, any election or any political campaign.

And none of it would have been possible without the friendship and support of so many along the way.

In the last few months, Iowans have learned what Connecticut has known for years:

That Jackie Clegg Dodd is something else. Elegant, eloquent, relentlessly on message - a Presidential candidate could learn a thing or two from a gal like her.

And our girls, Grace and Christina - honorary Iowans these last few months. I keep telling them that Connecticut audiences will appreciate their ice skating and Irish dancing just as much as Iowans have.

My brother and sisters, Martha, Bernie, Tom, Carolyn, Gina, Chris, and Kelly and our nieces and nephews - no one could ask for a more supportive, loving family.

And all the members of the Connecticut delegation. All of them came out and campaigned their hearts out in the Iowa cold.

Jackie and I want to thank the caucus-goers in Iowa and voters around the country stood with me in this race.

Your support allowed us to energize this race with new ideas rooted in our strongest, most enduring Democratic principles.

Tonight we thank all Iowans for welcoming us into their homes and hearts.

Jackie and I agree - the sincerity and generosity Iowa families have offered us in this campaign has been overwhelming. Your warmth and hospitality.

One thing I've learned these last few months is that this process starts here in Iowa for a reason.

You understand that you aren't just making a choice - you're making history.

And you are making it on behalf of a nation.

You dig and prod and poke - and you demand direct answers to direct questions.

Candidates, the process and most importantly the country are better served for it.

I want to thank my friends and staff - the motley crew known collectively as "The Dodd Squad."

They say that you can measure how people feel about you by how hard they are willing to work for you.

If that's the case, then as blessed as I have been in my life, tonight I am more fortunate than I ever realized.

Each of these men and women - and I wish I could name them all - has worked their hearts out for this campaign.

I want to say a special thank you to the friends we made in New Hampshire, South Carolina and Nevada - but most of all, my friends and constituents in Connecticut.

Thank you for allowing me to share our common concerns and confidence in a bright future with the rest of the country.

My friends at the International Association of Fire Fighters who have been out there day after day for me, especially Harold Schaitberger.

Harold, you've always said that fire fighters stand by those who stand by you. Well, in this campaign, you proved it.

You didn't follow the polls - you followed a higher power.

You followed your heart.

As I said when the fire fighters endorsed me back in August, for them it was never about who was in the lead, but who ought to lead.

It always has been.

I'll never forget the trust you put in me, Harold.

And lastly, the hundreds of thousands of citizens online who stood up time and again with us - the NetRoots.

In this campaign, you helped us show just what is possible when we stand up on principle, like when we stopped that terrible FISA bill in the Senate just a few weeks ago.

Tonight, I am infused with a renewed sense of purpose and energy, having learned so much from the hopes and dreams of the good people of Iowa, New Hampshire and others around the country.

I will carry the determination and courage of this campaign, as well as the result-oriented leadership I offered, back to the important battles that need to be won for the future of our country.

As I have for 26 years, I intend to serve by building broad, bipartisan support for bold ideas rooted in Democratic principles, turning them into national policies.

I commit that the fights we've waged in this campaign will not end tonight, from our Constitution to reversing global warming.

Whether it is the dozens that worked the field...the hundreds that worked the phones...or the tens of thousands that took to the blogs, I will make sure that the voices that spoke with us in this campaign are not forgotten but amplified.

Not ignored - but championed.

Nearly 40 years ago, my father said, "There's no other calling in life where you can do as much for as many people as you can through public service."

"Lawyers only have so many clients.

"Doctors only so many patients."

"But a well-intentioned public servant can make a difference in the lives of millions."

Tonight, I commit to work my heart out for the eventual nominee our Party chooses from this very talented field of candidates.

That remains our calling, our vocation, yours and mine.

Thank you, friends and family.

Thank you all for the gifts you have given Jackie and me - for your generosity.