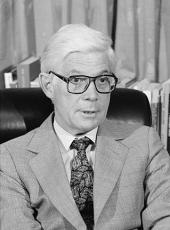 Thank you so very much, Governor Lucey and Mary Crisp and Joe Raugh, all of my other friends who are here on the platform tonight. Last night when I closed out the campaign in a rally at my alma mater in my native state of Illinois, I quoted a line from H.G. Wells that an election should be the celebration of democracy. Now your response tonight I think indicates that this is a celebration.

And you know, there are so many people whom I should thank tonight and my heart is full, full of the gratitude that I feel for all of the efforts that these many thousands and thousands of people have made. But I certainly want to ask my own family to come for just a moment and stand beside me again. My wife, Keke, and how wonderful it is that I was gifted with such a marvellous nature and sweet personality that I am never afflicted with feelings of envy, because there were times when I traveled around the country when I thought that many people would have preferred Keke to me as the candidate. But a couple of days ago, emulating that grand lady of American politics of a generation or more ago, Eleanor Roosevelt, Kiki was down some 600 feet underground in a coal mine in Illinois campaigning for her husband. She's been in the senior citizen centers, she's been in the public housing projects; she's been wherever across the face of our great land.

People needed to feel some encouragement, and when they have seen her and heard her voice and what she has had to say about the campaign, it's made a great contribution and I will be forever grateful. And Eleanora and John who have been on the campaign trail, I'm thankful to them for what they have done. This whole campaign experience has been one that has really brought our family very, very close together because of the common enterprise that we shared. And Suzy, even you have contributed, because from time to time I've used you in my jokes and said that you were home studying your nonproliferation lesson. And Karen - did you ever see more of a teen-age heart throb than Karen -she's been out there getting the teen-age vote for us.

You know, throughout this campaign I have talked about a new realism in American politics and I've done that because I've felt that our country was in trouble, that the nation simply had to face the facts. And now of course tonight I must do the same. Actually I don't want you to think that I just looked at my watch five minutes ago and came to the conclusion that perhaps the time had come to make this concession speech. I react somewhat more quickly than that, I can assure you.

Actually, history will record that it was at 8:35 P.M. Eastern standard time - let's have it straight for the historical record - 8:35 that I telephoned Governor Reagan in California and offered my congratulations to him, because the returns by that time had clearly shown that I was not destined to be the next President of the United States; that is a decision deferred.

(Crowd starts chanting '84, '84, '84!) Well, if you don't let me finish this speech, it will be 1984 and I'll still be up here. You have obviously chosen to take a very enigmatic remark and place your own interpretation on what I said.

You know, right after Abraham Lincoln had suffered one of his electoral defeats, and he suffered many during the course of his career, he was asked how he felt and he replied: Disappointed, yes; bruised, no.

Well of course I'm disappointed, I'm only human. But I hope that you can tell from my remarks and from my spirit and from my demeanor tonight, that I am not bruised in spirit or in mind.

This has been, I think, this campaign, the greatest event of my life. And obviously, of course, I am now hoping that we hold at 6 percent at least so it doesn't turn out to be the most expensive, as well.

But, you know, there are many reasons that prompt the feelings of real joy that I feel tonight. It's been my good fortune to run with somebody like Pat Lucey. You heard it. You know what kind of a man he is. His wit and his experience, his wise counsel, his good judgment, have reminded, I think, millions of Americans how decent and honorable politics really can be.

And Mary Crisp, this lovely lady that epitomizes all the (applause from crowd) I was going to say I have more women in my life than ever before, but that might be a somewhat injudicious statement to make. But if there are going to be any I would want them to be like Mary Crisp, because she has given so much to this campaign.