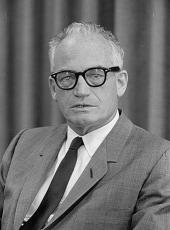 Ever since the last Republican convention thousands of Americans have asked me to seek the Republican presidential nomination in 1964. I withheld a decision until now, not because of any attempt to be politically coy, but because I have been giving every aspect of such a decision the most serious consideration.

Today, here at our home, in this State I love, with my family and with the people whose friendship and political interests have placed me where I am, I want to tell you this: I will seek the Republican presidential nomination. I've decided to do this because of the principles in which I believe and because I am convinced that millions of Americans share my belief in those principles. I decided to do this also because I have not heard from any announced Republican candidate a declaration of conscience or of political position that could possibly offer to the American people a clear choice in the next presidential election.

One of the great attributes of our American two party system has always been the reflected differences in principle. As a general rule one party has emphasized individual liberty and the other has favored the extension of government power. I'm convinced that today a majority in the Republican Party believes in the essential emphasis on individual liberty.

I've been spelling out my position now for 10 years in the Senate and for years before that here in my own state. I will spell it out even further in the months to come. I was once asked what kind of Republican I was. I replied that I was not a "me-too" Republican. That still holds. I will not change my beliefs to win votes. I will offer a choice, not an echo. This will not be an engagement of personalities. It will be in engagement of principles.

I've always stood for government that is limited and balanced and against the ever increasing concentrations of authority in Washington. I've always stood for individual responsibility and against regimentation. I believe we must now make a choice in this land and not continue drifting endlessly down and down for a time when all of us, our lives, our property, our hopes, and even our prayers will become just cogs in a vast government machine.

I'm convinced that in this year 1964 we must face up to our conscience and make a definite choice. We must decide what sort of people we are and what sort of world we want—now and for our children.

My candidacy is pledged to a victory for principle and to presenting an opportunity for the American people to choose. Let there be a choice—right now and in clear, understandable terms. And I ask all of those who feel and believe as I do to join with me in assuring both the choice and the victory.