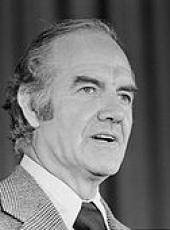 Today I announce my candidacy for the presidency of the United States. My wife, Eleanor and I have come home to South Dakota to make this announcement because here we shaped our basic political faith; here we were given the opportunity of public service. We are grateful to you for that opportunity and for your faith. We shall conduct this new effort to the honor of South Dakota, the nation, and ourselves.

You, my fellow South Dakotans, have not always agreed with my position on public issues. That was especially true in the early 1960's when I stood almost alone in opposition to the sending of American troops to Southeast Asia. Despite these differences, you have rewarded my willingness to state my convictions freely and honestly. I anticipate the same fair hearing from citizens across the land. Thoughtful Americans understand that the highest patriotism is not a blind acceptance of official policy, but a love of one's country deep enough to call her to a higher standard.

I seek the presidency because I believe deeply in the American promise and can no longer accept the diminishing of that promise. Our country began with a declaration of man's rights to "life, liberty and the pursuit of happiness." These liberating ideals gave such meaning and purpose to the new American nation that our forebears proclaimed, "We mutually pledge to each other our lives, our fortunes, and our Sacred honor."

But today, our citizens no longer feel that they can shape their own lives in concert with their fellow citizens. Beyond that is the loss of confidence in the truthfulness and common sense of our leaders. The most painful new phrase in the American political vocabulary is "credibility gap" -- the gap between rhetoric and reality. Put bluntly it means that people no longer believe what their leaders tell them.

In this decade when we are about to observe the 200th anniversary of our country, we have a new opportunity to square the nation's practices with its founding ideals. As we enter this period, we must undertake a re-examination of our ideas, institutions and the actual conditions of our life which is as fundamental as the discussions of the founding fathers two centuries ago.

A public figure today can perform no greater service than to lay bare the proven malfunctions of our society, try honestly to confront our problems in all their complexity, and stimulate the search for solutions. This is my intention in this campaign. And through my candidacy I intend to offer the American people a choice -- not between parties or ideologies, not between liberal and conservative or right or left. The choice is whether our civilization can serve the freedom and happiness of every citizen, or whether we will become the ever more helpless servants of a society we have raised up to rule our lives.

The issue is, of course, a cloak for many problems. Almost everyone senses the danger and almost no one can grasp its full dimensions or honestly claim to be possessed of full and sufficient answers. One thing, however, is very clear. We will not be helped to understanding by leadership built on image-making or public manipulation; by those who seek power by backroom deals, coalitions of self-interest, or by a continual effort to adjust their policies and beliefs to every seeming shift in public sentiment.

The kind of campaign I intend to run will rest on candor and reason; it will be rooted not in the manipulation of our fears and divisions, but in a national dialogue based on mutual respect and common hope. That kind of campaign takes time. And that is why I am making this announcement far ahead of the traditional day. People can be frightened, amazed and impressed in a moment. Reason and the communication of humane sentiment take longer. They are, however, more lasting and more powerful. And I have no doubt that the American people will think long and soberly before making the crucial decision of 1972. For my part, I make one pledge above all others -- to seek and speak the truth with all the resources of mind and spirit I command.

There is no higher standard to which our nation can repair then to the ideals of our founding documents. So as a candidate for the presidency, I shall see to call America home to these principles that gave us birth. I have found no better blueprint for healing our troubled land than is contained in the Declaration of Independence, the Constitution and the Bill of Rights. But I find a nation drifting so far from those ideals as to almost lose its way.

But while our problems are great, certain steps can be taken to recover the confidence of the nation. The greatness of our nation is not confined to the past, but beckons us to the future.

What other steps to future greatness?

First, we must have the courage to admit that however sincere our motives, we made a dreadful mistake in trying to settle the affairs of the Vietnamese people with American troops and bombers. I have opposed that intervention from the beginning, while our President and other presidential prospects were supporting it. There is now no way to end it or to free our prisoners except to announce a definite, early date for the withdrawal of every of American soldier. I make that pledge without reservation.

The tragedy of Vietnam does not mean that we are without vital interests abroad. Ironically, our obsession with Saigon has led to the neglect of such truly essential interests as the goodwill of Latin America, the survival of Israel and peace in the Middle East, and the opening of relations with China where one-third of the human race resides.

We are not likely to meet our responsibilities either at home or abroad until we remove the Southeast Asia albatross from our necks. This is the first order of business.

At home, we are beset by a most serious economic recession. This is the clearest weakness of the present administration -- a weakness marked by the worse inflation and the most severe unemployment in a decade. But that economic crisis can be solved by a coherent effort to gear our resources to the real needs of our society.

Ending the drain of Southeast Asia would relieve part of the inflationary pressure. Basing our defense budget on actual needs rather than imaginary fears would lead to further savings. Needless war and military waste contribute to the economic crisis not only through inflation, but by the dissipation of labor and resources and in non-productive enterprise.

For too long the taxes of our citizens and revenues desperately needed by our cities and states have been drawn into Washington and wasted on senseless war and unnecessary military gadgets. Each month, Washington wastes enough on military folly to rebuild an American city or give new life to a rural area. A major test of the 1970's is the conversion of our economy from the excesses of war to the works of peace. I urgently call for conversion planning to utilize the talent and resources surplus to our military-space requirements for modernizing our industrial plant and meeting other peacetime needs.

There would be work for all if we set about the job of rebuilding our cities, renewing our rural economy, reconstructing our transportation system, and reversing the dangerous pollution of our air, lakes and streams.

A program of tax and credit incentives, combined with family farm income supports, would not only revitalize rural America but would reverse the flow of people into already congested cities.

These tasks call for an expanding economy, an adequate money supply, reasonable interest rates, and the selective use of wage and price guidelines.

Beyond these essential economic questions, we must reshape our institutions, our technology, our bureaucracy, and our political process so that they become our servants, not our masters.

We must search out and allay the anger of many working middle-income Americans burned by inequitable taxes, unpleasant neighborhoods, and shoddy goods and services.

We still need to harness the full moral force of our nation to put an end to the most outrageous moral failure of our history -- the lingering curse of racism. We must end, too, the plight of hunger, bad housing, and poor health services.

We need most of all to answer the craving of the human spirit for a sense of belonging, of personal choice, and of pride in family, job and country.

I offer a public record consistently devoted to these humane values.

I embark on this new journey fully aware both of its glories and of its difficulties. I am sustained by the growing conviction that we have a unique opportunity to redeem this great but troubled land.

I believe the people of this country are tired of the old rhetoric, the unmet promise, the image makers, and the practitioners of the expedient. The people are not centrist or liberal or conservative. Rather, they see a way out of the wilderness. But if we who seek their trust, trust them; if we try to invoke the "better angels of our nature," the people will find their own way. We are the children of those who build a great and free nation. And we are no less than that. We must now decide whether our courage and imagination are equal to our talents. If they are, as I believe, then future generations will continue to love America, not simply because it is theirs, but for what it has become -- for what, indeed, we have made.