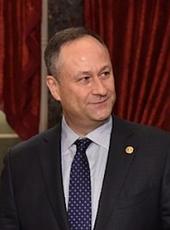 Second Gentleman Douglas Emhoff hosted a roundtable with Jewish leaders to discuss the rise in antisemitism and efforts to combat hate in our nation. The Second Gentleman was joined by Ambassador Susan Rice, White House Domestic Policy Advisor; Ambassador Deborah Lipstadt, Special Envoy to Monitor and Combat Antisemitism; and Keisha Lance Bottoms, Senior Advisor to the President for Public Engagement. The officials heard directly from the Jewish leaders about how antisemitism is impacting their communities. The leaders expressed their appreciation for the meeting and raised the issues of safety, education, and accountability. They also emphasized the need to worship free from fear. The Second Gentleman noted that he would continue to speak out against falsehoods, bigotry, and hate. He acknowledged the need for everyone to condemn vile acts of hate and urged individuals to not stay silent on this issue. Mr. Emhoff highlighted the actions President Biden has taken to combat antisemitism including increasing funding for physical security of nonprofits and synagogues, and appointing leaders to focus on hate crimes, and track and fight antisemitism. The Biden-Harris Administration will continue to take action to combat antisemitism and hate of every kind.