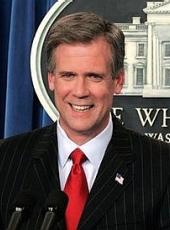 MR. SNOW: As you know, the President will be traveling to Chicago. Before the restauranteurs he will be talking about immigration reform and also making his first extended comments on the formation of a government in Iraq.

Also, I don't know if you've heard, but Prime Minister Blair's office has announced the Prime Minister will be making a visit to Washington later in the week. Details at this point still to be determined. As soon as we have a schedule we will let you know.

That's about it, a very quick statement, and whatever questions you have.

Q: What's the purpose of the Blair-Bush meeting?

MR. SNOW: Well, as you know, the Prime Minister has been in Iraq, so what I think what they're going to be doing is talking about Iraq and the next steps forward.

MR. SNOW: Well, I can't speak for what the Prime Minister is going to do; he may report on his desires. Prime Minister Maliki has also said that he would like Iraqi forces to be taking -- asserting much more control by the end of the year.

As we've always said -- and Prime Minister Blair reiterated this yesterday -- I mean, today, as least as far as the readout I've gotten -- which is it's all conditions-based. The conditions on the ground still determine how long troops stay there.

Q: Does he look forward to the meeting tomorrow with Olmert? Can you talk about -- there was an Israeli newspaper report that says the President was going to present him with some new ideas for advancing the peace process.

MR. SNOW: Well, I think at this point this is as much a getting-to-know-you meeting. Obviously, they'll be talking about the roadmap and the way forward. I don't expect anything formal, but the two of them obviously are going to be talking about ways to keep moving forward.

Q: What about a response to his comments yesterday on CNN, that he said Abbas was too weak to advance such a process?

MR. SNOW: Well, on the other hand, there have also been reports that the two of them have had cordial meetings. So, obviously, again, the viability of the Palestinian Authority is a key matter. Most importantly, the administration continues to say, the President continues to say that we are not going to recognize Hamas until they renounce violence.

Q: With a unified unity government now in place, what are the chances that American troops will start pulling out before the end of this year?

MR. SNOW: Well, once again, it's all conditions-based. You don't simply say because you have a government you pull out. The President has been pretty clear, troops will return when they're no longer needed. And it is still our desire to see that the Iraqi military and police forces are trained up and capable of providing for public security in Iraq.

MR. SNOW: Well, if you can tell me exactly what's going to happen in the next seven months, I'll give you an answer.

Q: What does the U.S. government want to accomplish by encouraging these European banks to limit their dealings with Iran?

MR. SNOW: Well, again, what's been going on is that there has been attempt to try to get the Iranians to come back to the table, to deal in good faith, with serious negotiations toward renouncing any nuclear military ambitions. We don't have any problem with peaceful civilian use of nuclear power, but it's important to get the Iranians to engage seriously.

Q: Tony, Prime Minister Olmert also said that Iran was months away from developing a nuclear weapon. What does the U.S. think of that prediction?

MR. SNOW: Well, I'm not going to get into our particular, precise estimates of Iranian nuclear capabilities.

Q: Do you disagree with him them that --

Q: Can we go back to the banks? If the U.S. government and the Treasury Department are encouraging the European banks to not have dealings, how does that play into this works with European allies to stop them from having the nuclear weapon or the nuclear ambitions? Why are you going about it this way -- encouraging these banks to limit their dealings --

MR. SNOW: I'll tell you what, I'll try to come up with more precise guidance because, frankly, for me to try to come up with rationales for this is going to be talking through my hat -- and that would be irresponsible for me, you and the government.

Q: Is he going to take questions today?

MR. SNOW: There is a possibility that he'll take some from the audience.