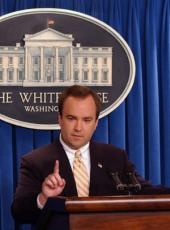 After arrival at Nashville, there will be a roundtable with the leadership and graduates of the Campus for Human Development. That's at 9:45 a.m. I expect there to be some pastors and a rabbi, as well as four graduates of the program.

Let me tell you a little bit about the Campus for Human Development. It was founded in 1995 by Charles Strobel. It's a faith-based, nonprofit organization that serves the homeless community of Nashville through a variety of programs, including primary and mental health care, substance abuse treatment, transportation, support groups, job training and placement, food and emergency winter shelter. The Campus welcomes everyone who seeks its services.

Following that, the President will make remarks at the 2003 National Religious Broadcasters' Convention. They're expecting about 2,700 guests. The National Religious Broadcasters' is an association representing more than 1,500 evangelical Christian radio and 350 television stations, program producers, multi-media developers and related organizations around the world. Its 30,000 members are responsible for much of the world's Christian radio and television.

And, let's see, the annual convention and exposition is the world's largest nationally and internationally recognized event dedicated solely to assist those in the field of Christian communications.

In addition to the President talking about his faith-based and community initiative today in his remarks, I do expect him to also talk about Iraq. Specifically, I want to draw your attention to some remarks he's expected to make. You know, the President will talk about how if war is forced upon us by Saddam Hussein's choice not to disarm, he will remind people that the American troops will act in the most honorable traditions of our military and the highest moral traditions of our country; that we will do everything we can to spare innocent lives.

That stands in stark contrast to what we're now seeing from Saddam Hussein. He'll talk about how Saddam Hussein is the true enemy of the Iraqi people, that he regards the Iraqi people as expendable when it comes to serving his own purposes. And, specifically, I'm talking about using the Iraqi people as human shields. We know that Saddam Hussein is already pre-positioning his military within civilian populations in order to shield his military forces and then blame coalition forces for casualties that he will end up causing. And this is in direct violation of the Geneva Convention. So I think that you should pay particular attention to those remarks when the President speaks today to the National Religious Broadcasters.

And with that, I'm glad to take questions.

QUESTION: Is the President hoping an Iraqi audience will hear these words? I mean, is this geared toward pressuring Saddam into, you know, leaving office?

MR. McCLELLAN: I think it's -- well, as you mentioned, obviously -- and as Condi Rice and Secretary Powell mentioned, talked about yesterday on the shows, if Saddam and his cronies were to leave Iraq, that would be a positive development. But, you know, it's important for the international community and Americans to know what Saddam Hussein is doing, the type of person that he is.

QUESTION: Are you preparing this proposal to give him 48-hour notice to flee Baghdad?

MR. McCLELLAN: What we are doing -- and as Condi pointed out, there is a period of intensive diplomatic discussions going on as we remain in this window of diplomatic opportunity. But, again, the --

QUESTION: And is that -- one of those discussions?

MR. McCLELLAN: Well, what we're focused on -- and, remember, it goes back to what the President said over the weekend. And this is about disarmament. This is about 12 years of deceiving and denying and cheating and retreating and playing hide-and-seek. And those games are over. And the President has made that very clear. And now this is an opportunity for the United Nations Security Council and the United Nations to show its relevance; 1441 is very clear in what it says. And Saddam Hussein has continued his defiance of the international community. And this is a moment for the Security Council to come together and show its relevance. And we will not put up with any more games of deception and any more games of hide-and-seek, as the President has made very clear.

QUESTION: What about NATO's role? Belgium now says it will veto any attempt to provide help to Turkey to defend itself. Is this something the administration can live with, or is it a major obstacle?

QUESTION: What can you do about this veto threat?

MR. McCLELLAN: Well, again, I think what's important to remind NATO members, remind the international community is that this type of request under Article IV goes to the core of the NATO alliance.

QUESTION: Is this some kind of ultimate test of the alliance?

MR. McCLELLAN: This is about an imminent threat.

QUESTION: Who's going to do the reminding to NATO?

MR. McCLELLAN: Well, I just made some comments regarding that and, obviously, we will work through NATO, as well.

QUESTION: So what's the significance of that, it goes to the core -- I mean, what if it's rejected?

MR. McCLELLAN: Again, we support the request by Turkey under Article IV.

QUESTION: Is the United States prepared to give Turkey more military equipment if NATO nations don't, to protect --

QUESTION: Scott, is there some evidence of the Iraqis positioning military troops or weapons among its civilian population?

MR. McCLELLAN: Well, that's what I just noted, that Saddam Hussein is already taking steps. And this is what the President will talk about, as well, in his remarks --

QUESTION: No, I understand, but what I'm asking is --

QUESTION: -- what's the evidence? Is it -- are we getting the evidence from reports on the ground, or is it satellite, or is it -- what is it?

MR. McCLELLAN: Well, again, I'm not going to go into intelligence information that we're getting there, but that's intelligence matters.

QUESTION: Is the President going to provide any backup, or is he just going to make the charge?

QUESTION: So no evidence of --

MR. McCLELLAN: I just noted that our intelligence and reports that we have indicate --

QUESTION: But you won't provide that?

MR. McCLELLAN: -- indicate that he is pre-positioning military forces, and we know his history, as well, doing this in the past.

QUESTION: I just want to be clear, Scott. When you say you support the request of Turkey --

QUESTION: -- you're talking about the request for discussions of a possible imminent threat?

QUESTION: Right, as opposed to a request for equipment or NATO --

QUESTION: Did comments yesterday from Blix and ElBaradei tell you about Friday, what to expect out of their report?

MR. McCLELLAN: Well, I'm not going to prejudge their report. But I think Secretary Powell addressed this at length yesterday, as well as Condi. And this is a -- if Saddam Hussein is not making a drastic change in course in showing that he is going to disarm, then this is, as the President pointed out, a moment of truth in the United Nations Security Council, and then the discussion will become what are the serious consequences imposed on the regime in Iraq and on Saddam Hussein. But, again, I don't want to prejudge the report.

QUESTION: What about Hans Blix's -- and your reaction to his statements -- shown some more cooperation --

MR. McCLELLAN: A little bit here and a little bit there, is not going to get it done for Saddam Hussein. No more games of cheat and retreat. No more games of deception. The President has made that very clear. And there's a short period of time left. This is a time for the United Nations Security Council to show its determination to enforce 1441.

QUESTION: Did Blix get anything done, then, over the weekend?

MR. McCLELLAN: Well, I noticed he made some comments a short while ago in response to a question about more inspectors. And Dr. Blix said that, and I quote him, "The principle problem is not the number of inspectors. It's, rather, the active cooperation of the Iraqi side." And I think that's the message you've heard from administration officials yesterday, as well, that this isn't about inspections. This is about disarmament. And if Saddam Hussein was going to comply and going to disarm, we would see that out of him already. Whether it was 100 inspectors, or 300 inspectors, that's not the issue. The issue is disarmament and there is a short period of time left before this United Nations Security Council must address and enforce 1441.

MR. McCLELLAN: There of a lot of intensive diplomatic efforts going on right now. I just gave you -- you can check with the Department of State and others.

QUESTION: Is the President likely to be working the phones --

MR. McCLELLAN: I don't have any more update on that.

QUESTION: -- with Chirac and Schroeder those other leaders this week?

QUESTION: You said, repositioning troops. Where is he putting them, in villages and --

QUESTION: But, I mean, are these troops like regular army or --

MR. McCLELLAN: These are military forces.

QUESTION: But I mean if he's scattered them through the country, will they not be less effective as a military force?

MR. McCLELLAN: You know, I'll leave that to others to address.

QUESTION: Do you view it as a power grab or --

QUESTION: Do you view their coordinated response as some kind of power grab? And if --

MR. McCLELLAN: Well, look, there are a lot of diplomatic efforts going on right now and there's a lot of discussion going on. Again, it comes back to the question of the United Nations Security Council and the United Nations showing its relevance and enforcing its demands on the Iraqi regime. How much longer do we wait after 12 years and 90 days of cheat and retreat, deny and deceive, hide-and-seek?

QUESTION: Scott, at the retreat yesterday, did the President hear anything to make him leave with any optimism about his domestic agenda which faces some opposition from Republicans, as well as Dems?

MR. McCLELLAN: Are you asking about any specific ones? I mean, this is early in the --

MR. McCLELLAN: It's early in the Congressional session. As we pointed out on Friday in the briefing, this begins a two-week period where he's going to talk about diplomacy abroad and jobs at home. And it's important, as he mentioned yesterday, to remind Congress to act on the domestic agenda. This is an agenda that includes his proposals to create an environment for jobs and economic growth, to fulfill our promise to seniors under Medicare, on modernizing it and providing prescription drug coverage that they've waited for far too long.

And it's a time to move forward on the compassion agenda. There are important priorities both abroad and at home that must be addressed. And the President and the administration are going to continue fighting for the agenda he outlined in the State of the Union.

MR. McCLELLAN: The proposals he outlined -- no, I think it was a very, very constructive meeting yesterday with Republican congressional leaders. And we're going to continue working with both parties to pass the President's agenda, starting with his jobs and economics growth package.

QUESTION: Is the addition of a couple Chechen groups to the list of terrorist organizations an attempt to earn Russia's support on Iraq?

MR. McCLELLAN: I would not tie the two together, when the -- are you talking about the recently released State Department list, been added?

MR. McCLELLAN: All right? Thanks.