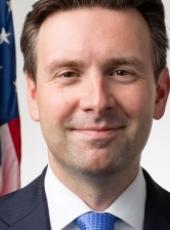 MR. EARNEST: Good afternoon, everybody. You've already heard from me a lot today, so in case there are some last-minute questions on policy, I'll take them. But mostly, we wanted to just step back here quickly to see if you had questions about the trip and anything else that might have come up in the last couple minutes. Jen has got something that she wants to start with.

MS. PSAKI: So before we get started, just two things to highlight for you. One, as you know, we're traveling to New York today. The President is going to attend a dinner with 60 people at the NoMad Hotel in New York City. Tickets for the event cost $40,000 per person. One tidbit you don't know about yet is that Trevor Smith, who's the winner of the family photo with the President fundraising context the campaign launched, will meet with President Obama. Trevor is a West Hartford, Connecticut, native. He lives in Astoria, New York, and is the manager of the Visitor's Center and Events at the National Jazz Museum in Harlem.

The second thing I just wanted to highlight before we take your questions is you may have seen that Romney did an interview with ABC yesterday, where he was asked whether he had ever paid less than the 13.9 percent rate he paid in 2010. He said, I don't remember, I'm going to have to get back to you. That's not an exact quote, just to paraphrase. And we're looking forward to him getting back. As we understand, he said he's not going to go back now. But I think I can speak for many, many millions of teachers, firefighters, nurses in this country who would love to know if he has paid a lower rate in past taxes than the 13.9 percent he paid in 2010 -- which as a reminder, is about half the rate of many middle-class families in this country.

So with that, we're happy to take your questions.

Q: -- who's co-hosting the event tonight?

MS. PSAKI: I don't have a list of co-hosts. I'll let you know if there's more information that we're going to provide on that front.

Q: Any thoughts of Romney's comments in Israel? Do they suggest that he is not ready for the world stage?

MS. PSAKI: Well, as soon as Mitt Romney started taking this trip -- he's now been to two countries and he's had two countries where he has made a series of fumbles. He's been fumbling the foreign policy football from country to country. And there's a threshold question that he has to answer for the American people, and that's whether he is prepared to be commander-in-chief.

So as I said, as we look to the past events, we know that this raises some questions about his preparedness. And we'll see how the rest of the trip goes.

Q: Did you mean to say -- do you think that "fumble" is the right analogy? Maybe you want to go to "scratch" or something? (Laughter.)

MS. PSAKI: I think "foreign policy fumble" has a nice ring to it, so --

Q: Are you advocating for American-style football to be included in the Olympics? Is that the official position?

MS. PSAKI: I do love football, especially the Bengals and Andy Dalton. But that's a whole other, separate question.

Q: What state are the Bengals in?

Q: So what did the Obama campaign do to try to turn around -- to get Solidarity to come in and take a position at odds with Lech Walesa, saying that he endorsed Mitt Romney? Solidarity then came out and said that he did not speak for them. I'm just curious what the campaign did after hearing Lech Walesa this morning supporting Romney.

MR. EARNEST: Well, I'll be honest with you, this is actually the first I've heard about it. I don't know how recently this happened.

Q: The DNC has apparently heard about it. The DNC sent out a bunch of rapid response emails. I think that's what Jackie is asking about.

MS. PSAKI: Look, I mean, I think people are looking at the trip as, again, whether Mitt Romney is meeting the threshold of whether he's prepared to be commander-in-chief. We know the American voters are going to judge whether he's ready, whether he has met that threshold on this trip, through a series of his speeches, through remarks he's made, again, through fumbles he's made on the trip.

I don't have anything for you specifically on what the campaign did in response internally. But if there's anything new, we'll get back to you on that.

Q: Is the President going to be watching the Olympics on Air Force One today?

MS. PSAKI: We'll have to see. I think we're going to force the Olympics onto all the TVs. (Laughter.) So hopefully -- I know there are a number of events going on today. We'll get you an update on whether he watches any.

Q: Has he watched anything thus far that you're aware of? I don't know if that was in the briefing today and we missed that.

MR. EARNEST: It was.

MR. EARNEST: It was. It's okay. I know that he was looking forward to the Olympics starting, so I'd be surprised if 72 hours into it he hadn't seen anything yet.

Q: Do you have any preview of the travel for the rest of the week, what themes to expect?

MS. PSAKI: I don't want to get too far ahead of where we are. As you know, he is going to be traveling to Ohio on Wednesday, and he'll be traveling to Virginia and Florida on Thursday. You should expect to hear him continue to lay out the choice between his vision for the future, his plan to protect the economic security of the middle class, and how that contrasts with Mitt Romney. And as we get closer, if there's anything new to preview, we'll make sure you guys know.

Q: What do you think about Mitt Romney's fundraiser in Israel? Is it appropriate?

MS. PSAKI: Look, I think that if you look at this trip -- and I was on the trip four years ago when President Obama, then-Senator Obama, took the trip when he went overseas -- and that trip was full of not only access to the media -- which I know you all enjoy -- not only did he do several press conferences and press avails, but we also had access for the media after meetings. There were sprays. They made remarks. And we tried to keep it at the highest level possible.

When we look at this trip, it seems clear it's a bunch of fundraisers and photo ops and fumbles. So we're not sure that Mitt Romney is moving the ball forward or that he's passing the threshold he needs to meet for the American people as to whether he's prepared to be commander-in-chief.

Q: -- transparency at the highest levels, why won't you guys release who the fundraisers are and the co-hosts for tonight's event?

Q: We have no idea who the President is raising money from tonight, not even co-hosts. We just know that it's at the nondescript hotel.

MS. PSAKI: Well, you're an excellent reporter for Bloomberg, and I'm sure you will do some reporting when you're at the event.

MR. EARNEST: I'm sure you're all familiar with the Federal Election Commission reporting requirements where you'll see exactly who contributed to the President.

Q: You guys are always taking a dig at Romney for not being transparent and having media access. And I'm merely asking --

Q: -- campaign dialogue about Obama really understands the working-class, and he's in touch with Americans who are anxious about the economy. Here you are campaigning in New York; we have multi-thousand-dollar dinner plates for tonight. How does that chime with what Obama is trying to sell as his personal story of understanding the working-class American, the biography that is out -- they're nervous about the economy?

MS. PSAKI: You'll hear him talk tonight about his commitment to fighting for the middle class, passing a tax cut for middle-class families to ensure they have that security, the contrast he has with Mitt Romney on those positions. And I bet you a number of the people who are attending the event today are supporting him because of his strong support for the middle class and for families across the country.

And one thing for you, on the question of transparency, is that in terms of the bar of transparency, the President and the campaign and the White House have done more than any other White House and any other campaign to be transparent. We release our bundlers. That's something that Romney does not do. And that's an area where we'd love for him to come meet our bar.

Q: So when Josh started answering that question, is he answering it on the policy side of it?

MR. EARNEST: The policy of the Federal Election Commission, yes.

MS. PSAKI: The White House and the campaign are both transparent -- so to be clear.