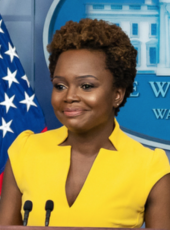 The President's economic vision builds the economy from the middle out and the bottom up, not top down. The President will outline the strength of the economy, including historically low -- low unemployment rates as a result of his American Rescue Plan and bipartisan infrastructure law. And he will say there is more work to do, and tackle -- and tackling inflation is his top priority.

He'll lay out the stark choice: Ask the wealthy to pay their fair share, as he is proposing, or put Medicare, Social Security, and Medicaid on the chopping block every five years, which is what congressional Republicans are proposing.

As you all know, traveling with us today are Representative Brendan Boyle, Mary Gay Scanlon, and Donald Norcross. And greeting the President on the ground will be Philadelphia Mayor Jim Kenney.

Okay. With that, Darlene, you want to kick us off?

MS. JEAN-PIERRE: I don't want to get ahead of the President. He's going -- like I said, he's going to make the stark contrast. He's going to continue to talk about the work that he has been doing on behalf of the American people.

As we've said before, his priority as it relates to the economy is tackling inflation. But I'm not going to get ahead of him. I'll let him -- I'll let him speak to what he's going to be discussing today or in his remarks.

MS. JEAN-PIERRE: Well, just for folks who are not aware, yes, a statement was put out -- I put out a statement this morning.

Just for a little bit -- to give you a little -- folks a little bit of what the statement says. I'm not going to, clearly, read through the whole thing, but President Biden will visit the Middle East region from July 13th to 16th to reinforce the United States' ironclad commitment to Israel's security and prosperity and attend a Summit of the Gulf Cooperation Council plus Egypt, Iraq, and Jordan, known as the GCC+3.

He will also meet with counterparts from across the region to advance U.S. security, economic, and diplomatic interests.

The visit to the Middle East region culminates months of diplomacy and follows the President's meeting with ASEAN leaders at the White House, his travel to the Republic of Korea and Japan, and the Quad Summit, his hosting of the Summit of the Americas last week in Los Angeles, and his visit next week to Europe for G7 and NATO.

But to your question, look, you know, the President is going to see over a dozen leaders on this trip, including King Salman and the leadership from our Saudi hosts for the GCC+3 Summit. Yes, we can expect the President to see the Crown Prince as well.

MS. JEAN-PIERRE: So, you know, we are closely watching. We know that families are concerned about inflation in the stock market. That's something that we are aware of.

The American people are well positioned, we believe, to face these challenges because of the -- because of -- because of what the President has done this past year and a half on dealing with the economy -- a historic, economic -- economic place that we're in with more than 8 million jobs since President Biden took office. Seventeen states have historical -- historically low unemployment.

So, all of these things matter. But, yes, we are watching it closely, and we understand what this -- how this feels for the American people.

Q: Is he having -- is he having meetings, perhaps, you know, to discuss sort of this -- this -- the growing forecasts that are coming out of -- you know, from economists about the economy?

MS. JEAN-PIERRE: I don't have any meetings to read out for you at this time. Clearly, this President has made inflation a priority -- an economic priority. You've heard from him for the past several months on it. You'll hear from him about it today. So this is something that is at top of mind.

Q: The market drop has caused a tremendous loss of wealth. Is the President more concerned about the loss of wealth or the inflation?

MS. JEAN-PIERRE: So we know that higher prices are having a real effect, again, on people's lives. And so that matters, and that is something that the President really is keen on. And we are incredibly focused on doing everything we can to making sure the economy is working for the American people.

You'll hear him talk about that specifically today, as I read out in the topper. But, you know, the economic -- again, his economic plan has led to the strongest job market in American history. And that's -- thanks to the American Rescue Plan, unemployment is at historic lows.

So, these are global challenges that we're facing. We believe that we're in a good place to fight inflation. We know what the American people are feeling. This is, again, an -- a top economic priority for the President.

Q: On the Saudi portion of the trips, I wanted to ask you about that, if I may. Is this a last-ditch effort, a Hail Mary attempt to lower oil and gas prices that we're facing right now?

(A nearby interior door opens.)

Q: Watch out behind you.

So, look, while energy security is one important issue, it's hardly the only one. Saudi Arabia is the chair of OPEC-Plus, as you all know, and it's the largest exporter.

Of course, we discuss energy with Saudi -- the Saudi government, and we welcome its -- its leadership in achieving a consensus amongst the group of -- to increase planned supply increases by 50 percent last week.

But, look, Saudi Arabia has been a strategic partner of the United States for nearly 80 years. And there's no question that important interests are interwoven with Saudi Arabia, notably the recent extension of truce in Yemen, which has saved countless of lives.

So, there is an array of agenda, a long list of things to talk -- to -- to have a conversation about that's going to be on the agenda.

But as the President has said many times, he is -- he looks forward to leader-leader conversation and -- as it relates to having a strategic partnership.

Q: Karine, so when the President does see MBS on his trip, does he plan to address Khashoggi's murder with him directly?

MS. JEAN-PIERRE: The President -- as you know, human rights is always part of the conversation in our foreign -- our foreign engagements. So that will always be the case. It doesn't ma- -- it does- -- regardless of who he's meeting with.

We are not -- what we -- I want to say: We're not overlooking any conduct that happened before the President took office. We issued an extensive report on Khashoggi and issued a Kha- -- the so-called Khashoggi Ban.

So it's important to also emphasize that while we collab- -- re-collaborate relationships, we are not looking to rupture relationships as well.

Q: Karine, there was a report in Axios this morning that the President favors lifting tari- -- Chinese -- tariffs on China on consumer goods. I'm wondering if you can confirm if that's true, but also talk about -- I mean, he's going to meet with unions today who have pretty steadfastly opposed lifting tariffs. Is he going to speak about tariffs and his decision-making process here with the members of the Union?

MS. JEAN-PIERRE: So, I'll say this: We have said from the beginning some Trump tariffs were irresponsible and do not advance our economic or national security and instead raise costs for families and businesses. And I've said many times that, you know, we're discussing this and working to align these haphazard tariffs and our priorities to safeguard the interest of our workers and critical industries; boosting American workers, wages, and creating jobs; securing the resilience of our supply chains; sustaining our technology edge; and advancing our national security.

Q: Just a quick housekeeping note: We've had a couple incidences in gaggles, including under the wing today, where staff members have been touching camera equipment and microphones. So, I was just wondering if we can get a commitment for you to talk to people about how that can't happen during that.

As the plane lands -- I -- I was not out -- I was not outside when -- to the -- to what you're discussing or bringing up right now. But we understand how important it is for all of you to hear directly from the President. So, thank you for letting us know.

All right, guys. Thank you.