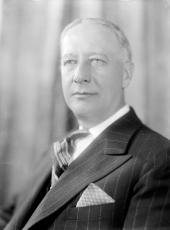 Now that the dust and smoke of battle have cleared away, I am grateful for the privilege extended to me by the Democratic National Committee of speaking to millions of my fellow citizens and of presenting to them some reflections on the campaign just ended.

The Democratic Party is the oldest political organization in the United States. So well defined are the doctrines and the principles upon which it is founded that it has survived defeat after defeat. In the sixty-five years that have passed since the Civil War only two Presidents were elected on the Democratic ticket. No political organization otherwise founded would have been able, during all these years, to maintain an appeal to the people that brought to the polls on last election day 14,500,000 voters, subscribing once more to its platform and renewing their allegiance to the principles which it has upheld throughout its long history.

The verdict of the American people last Tuesday was not the crushing defeat of the Democratic Party that some of the headlines in the public press would have us believe. On the contrary, let us see what the facts are: Take the popular vote—a change of 10 per cent of the total number of votes cast would have changed the popular result. Considering it from the viewpoint of our Electoral College system, a change of less than 500,000 votes, spread around the country, would have altered the result.

We have, therefore, the assurance from the election returns that the Democratic Party is alive, a vigorous and a forceful major minority party.

The existence of such a party is necessary under our system of government. The people rule negatively as well as affirmatively, and a vigorous and intelligent minority is a necessary check upon the tyranny of the majority.

Experience has always shown, even in our smaller political subdivisions, that when the minority party is weak and helpless, grave abuses creep into the structure of government and the administration of its affairs. When the majority party believes that it has everything its own way, it loses its fear of reprisal at the polls for mismanagement or misconduct of the government.

A political party is organized to help the country, and not merely to achieve victory. It survives, not on the basis of the rewards it secures for its followers, but on the strength and on the soundness of the principles for which it stands. A political party can only justify its existence in so far as it operates for the purpose of promoting the welfare, the well-being and the best interests of the people.

The principles for which the Democratic Party stands are as sacred in defeat as they would have been in victory. If the cause of democracy was right before the election, it is still right, and it is our duty to carry on and vindicate the principles for which we fought. The Democratic Party today is the great liberal party of the nation. It leads the progressive, forward-looking thought of the country. It holds out the only hope of return to the fundamental principles upon which this country was built and as a result of which it has grown and prospered.

To the young men and women of the country the Democratic Party, with its fine traditions, its high idealism and its breadth of vision, offers the only inspiration.

The Democratic Party certainly would not be in a position four years from now to solicit the confidence and support of the American people if during that period it neglected to build up a constructive program and relied entirely upon the failure of the opposition party. That cannot be done by the minority party permitting itself to become a party of obstruction and opposition for political purposes only. We have seen too much of that in this country and in many of its civil divisions.

It has been particularly noticeable in the State of New York, where great forward-looking, constructive measures were delayed for years by partisan opposition seeking to withhold from the Democratic Party credit for their accomplishment. The party responsible for such obstructive tactics has been rebuked by the people at the polls no later than last Tuesday. Too often a minority has attempted to ride into power by taking advantage of the failure of the majority to translate into an actuality the campaign promises and pledges upon which it sought the suffrage of the people.

While it is true that every party must adhere to its fundamental principles, obstruction and blockade for the sole purpose of embarrassing the party in power are not calculated to promote the best interests of the country. It would be regarded as a constructive achievement if the Democratic Party at Washington were to formulate a program, adopt it, offer it to the Congress of the United States and there defend it. A refusal on the part of the party in power to accept it, or their inability to bring about party unity for the solution of these problems, would then fix the responsibility and make a record upon which a successful campaign can be waged four years from now.

In other words, the Democratic Party would not be acting in good faith with the people of the country nor in good faith with the millions of those who rallied to its support if it were to sit by and adopt a policy of inaction with the hope of profiting solely by the mistakes or failures of the opposition. What this country demands is constructive and not destructive criticism. A constructive program, embodying the declarations of the Democratic platform, should be promptly developed.

Above all things, the function of a minority party is educational in character. It will not do for the great rank and file of the American people to be intensely interested in the issues and party programs for a couple of months before election and then permit that interest to die out when the result is announced. Political platforms and political promises are not self-enacting. The political history of the United States clearly indicates that every progressive step, every great governmental reform has been won only after a period of persistent effort and by the slow process of educating the electorate.

The first and indispensable element of education is information. A full and complete presentation of the facts. That is easier to do today than it was years ago, with the use of the radio and the increasing interest of our young people in public affairs. It must be remembered that while political parties may seriously divide public opinion throughout the country during the progress of a campaign, after the American people have made their decision the man selected is not the President of the Republican Party, but is the President of the United States. He is the President of all the people and as such he is entitled to the cooperation of every citizen in the development of a program calculated to promote the welfare and best interests of this country. He is entitled to a fair opportunity to develop such a program. Only when he fails to accomplish it does the administration become the subject of proper criticism by the opposition party.

Premature criticism not only fails of its purpose, but often results to the disadvantage of the critic himself. Party responsibility is not confined to its handling of governmental affairs. A political party must also be accountable to the people of the United States for the management of its internal affairs, and no political party can afford to accept the support of forces for which it refuses to accept responsibility. It will not do to let bitterness, rancor or indignation over the result blind us to the one outstanding fact, that above everything else we are Americans.

No matter with what party we align ourselves on election day, our concern should be for the future welfare, happiness, content and prosperity of the American people.

I want this to include also the men and women throughout the country, no members of the Democratic Party, who took inspiration from the progressive platform adopted at the Democratic Convention and supported by declarations of purpose with respect to those principles. Thousands of letters and telegrams have come to me since election day, asking that I not lose interest in the future welfare of the Democratic Party. Let me take this modern means of making reply to them by making the definite statement that I do not regard the defeat of the Democratic Party at this election as impairing in the slightest degree the soundness of the principles for which it stands. I am just as anxious to see them succeed as I was when the party honored me with the nomination, and with all the vigor that I can command I will not only stand for them, but I will battle for them.

It would be unnatural for me not to be disappointed at the result. Tonight, however, as I address these few remarks to my friends all over the country, I look back on my twenty-five years of public service. I recall them from the first time the Democratic Party selected me, a struggling youth, for elective office as member of the Legislature. I recall my first official visit to the Capitol at Albany, and never shall I forget the thoughts that ran through my mind at that time. Many years later I felt that I had achieved my greatest ambition when the Democratic Party made me its standard bearer in the State. To that party and to the people of this State, who have four times elected me as their Chief Executive, I shall always be profoundly grateful. I have in a measure attempted to express that gratitude in the form of devotion to public service. In return for the confidence reposed in me by the people of my State, I endeavored to administer the affairs of the State with an eye single to the welfare and the happiness of her people.

The Democratic Party this year conferred upon me the greatest honor that it can offer to any of its members, the nomination for the presidency of the United States. Regardless of the outcome, in a spirit of the deepest appreciation of the opportunities afforded me and of the loyal support given to me by upward of 15,000,000 of my fellow citizens, I pledge my unceasing interest and concern with public affairs and the well-being of the American people.