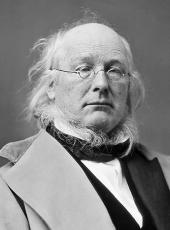 Gentlemen: I have chosen not to acknowledge your letter of the 3d inst. until I could learn how the work of your Convention was received in all parts of our great country, and judge whether that work was approved and ratified by the mass of our fellow-citizens. Their response has from day to day reached me through telegrams, letters, and the comments of journalists independent of official patronage, and indifferent to the smiles or frowns of power. The number and character of these unconstrained, unpurchased, unsolicited utterances satisfy me that the movement which found expression at Cincinnati has received stamp of public approval, and been hailed by a majority of our countrymen as the harbinger of a better day for the Republic.

I do not misinterpret this approval as especially complimentary to myself, nor even to the chivalrous and justly esteemed gentleman with whose name I thank your Convention for associating mine. I receive and welcome it as a spontaneous and deserved tribute to that admirable Platform of principles, wherein your Convention so tersely, so lucidly, so forcibly, set forth the convictions which impelled, and the purposes which guided its course—a Platform which, casting behind it the wreck and rubbish of worn-out contentions and by-gone feuds, embodies in fit and few words the needs and aspirations of To-Day [sic]. Though thousands stand ready to condemn your every act, hardly a syllable of criticism or cavil has been aimed at your Platform, of which the substance may be fairly epitomized as follows:

I. All the political rights and franchises which have been acquired through our late bloody convulsion must and shall be guaranteed, maintained, enjoyed, respected, evermore.

II. All the political rights and franchises which have been lost through that convulsion should and must be promptly restored and reestablished, so that there shall be henceforth no proscribed class and no disfranchised caste within the limits of our Union, whose long estranged people shall reunite and fraternize upon the broad basis of Universal Amnesty with Impartial Suffrage.

III. That, subject to our solemn constitutional obligation to maintain the equal rights of all citizens, our policy should aim at local self-government, and not at centralization; that the civil authority should be supreme over the military; that the writ of habeas corpus should be jealously upheld as the safeguard of personal freedom ; that the individual citizen should enjoy the largest liberty consistent with public order; and that there shall be no Federal subversion of the internal polity of the several States and municipalities, but that each shall be left free to enforce the rights and promote the well-being of its inhabitants by such means as the judgment of its own people shall prescribe.

IV. There shall be a real and not merely a simulated Reform in the Civil Service of the Republic; to which end it is indispensable that the chief dispenser of its vast official patronage shall be shielded from the mam temptation to use his power selfishly by a rule inexorably forbidding and precluding his re-election.

V. That the raising of Revenue, whether by Tariff or otherwise, shall be recognized and treated as the People's immediate business, to be shaped and directed by them through their Representatives in Congress, whose action thereon the President must neither overrule by his veto, attempt to dictate, nor presume to punish, by bestowing office only on those who agree with him, or withdrawing it from those who do not.

VI. That the Public Lands must be sacredly reserved for occupation and acquisition by cultivators, and not recklessly squandered on the projectors of Railroads for which our people have no present need, and the premature construction of which is annually plunging us into deeper and deeper abysses of foreign indebtedness.

VII. That the achievement of these grand purposes of universal beneficence is expected and sought at the hands of all who approve them, irrespective of past affiliations.

VIII. That the public faith must at all hazards be maintained, and the National credit preserved.

IX. That the patriotic devotedness and inestimable services of our fellow-citizens who, as soldiers or sailors, upheld the flag and maintained the unity of the Republic shall ever be gratefully remembered and honorably requited.

These propositions, so ably and forcibly presented in the Platform of your Convention, have already fixed the attention and commanded the assent of a large majority of our countrymen, who joyfully adopt them, as I do, as the bases of a true, beneficent National Reconstruction—of a New Departure from jealousies, strifes, and hates, which have no longer adequate motive or even plausible pretext, into an atmosphere of Peace, Fraternity, and Mutual Good Will. In vain do the drill-sergeants of decaying organizations flourish menacingly their truncheons and angrily insist that the files shall be closed and straightened; in vain do the whippers-in of parties once vital, because rooted in the vital needs of the hour, protest against straying and bolting, denounce men nowise their inferiors as traitors and renegades, and threaten them with infamy and ruin. I am confident that the American People have already made your cause their own, fully resolved that their brave hearts and strong arms shall bear it on to triumph. In this faith, and with the distinct understanding that, if elected, I shall be the President, not of a party, but of the whole People, I accept your nomination, in the confident trust that the masses of our countrymen, North and South, are eager to clasp hands across the bloody chasm which has too long divided them, forgetting that they have been enemies in the joyful consciousness that they are and must henceforth remain brethren.