A new study by the Tax Policy Center found that the new tax policy proposed by Senator Rick Scott (R-FL) could disproportionately impact low-income and middle class families – with tax increases of $450 on average for middle-income households and even larger tax increases for low-income families – while leaving wealthy families unaffected. TPC's analysis found that Sen. Scott's tax policy would result in:

The impact of these tax policies would have disproportionate impacts on working-class families, with more than 80 percent of the tax increases imposed on families making $54,0000 or less. Low-income families with children would see their overall tax bill increase by more than $5,000, or more than 20 percent of their after-tax income.

Sen. Rick Scott (R-FL), who chairs the National Republican Senatorial Committee, has proposed an 11-point plan to "Rescue America" including this: "All Americans should pay some income tax to have skin in the game, even if a small amount. Currently over half of Americans pay no income tax."

The Tax Policy Center estimates that achieving Scott's goal could increase federal income taxes by more than $100 billion in 2022 alone. More than 80 percent of the tax increase would be paid by households making about $54,000 or less, and 97 percent would be paid by those making less than about $100,000.

Because Scott has not said how his plan would work, TPC analyzed a simple version consistent with his idea. It would create a minimum tax of $100 for unmarried filers and $200 for couples filing jointly. In other words, every household would have a pay at least $100 in federal income tax each year, no matter their income. Other versions of Scott's idea would carry a different price tag, though all would primarily burden low- and middle-income households.

A minimum income tax for all households would effectively eliminate the refundable portion of tax credits such as the Child Tax Credit and the Earned income Tax Credit. It would reduce the value of the standard deduction for millions of low- and middle-income households even though increasing that deduction was a key element of the GOP's 2017 Tax Cuts and Jobs Act (TCJA).

A Scott-like plan would raise taxes on middle-income households by an average of $450. 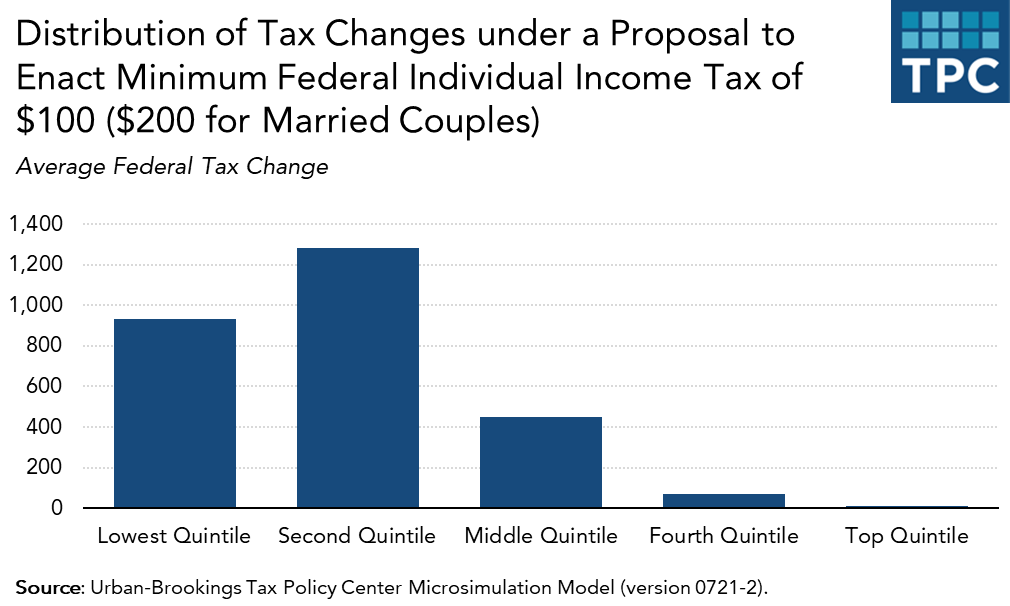 As Scott himself said, "I'll warn you, this plan is not for the faint of heart."

It also is contrary to long-standing Republican tax-cutting orthodoxy: Ronald Reagan made eliminating the income tax for low-income households a cornerstone of the Tax Reform Act of 1986.

And it appears inconsistent with other elements of Scott's own plan. For example, in a section entitled "Family," he asserts, "The nuclear family is crucial to civilization, it is God's design for humanity" and adds "Families are crucial in raising young men and women of character and responsible members of society."

It also is worth noting that Scott's claim that "currently over half of Americans pay no income tax" is outdated and significantly overstates the matter. Far more households have "skin in the game" than Scott asserts.

Who pays no income tax

The share of households that paid no federal income tax hovered in the low- to mid-40s until the pandemic. In 2020, it increased to more than 60 percent. This was due in part to massive COVID-19-related job losses and a related decline in incomes. In addition, the three rounds of Economic Impact Payments (stimulus checks) in 2020-2021 were structured as refundable tax credits. And Congress increased the Child Tax Credit for the vast majority of parents. Combined, all this substantially reduced the income tax liability of more than a hundred million households and temporarily turned many from payers of small amounts of federal income tax to non-payers.

The share of those not paying federal income tax remained very high in 2021, at about 57 percent. But the economy recovered, federal assistance ended, and the number of non-income tax payers is falling sharply. TPC estimates that only about 42 percent won't pay federal income tax this year and the share will fall slowly but steadily to the high 30s by the end of this decade.

It also is important to note that many of these households do pay other federal taxes, including payroll and excise taxes. For example, fewer than 17 percent of households will pay neither income nor payroll taxes this year—many of them lower-income older adults. And nearly everyone pays some state or local taxes, including sales taxes.

Scott is right about one thing. His plan is not for the faint of heart. And it likely will leave GOP Senate candidates with some explaining to do in the coming election.