A new report by the Center for American Progress affirms that the Biden administration's first-year actions have driven the American economy to a world-leading recovery and historic growth. Over the last year, the country saw record job gains and unemployment come down at a record pace. GDP surpassed its pre-pandemic levels and disposable incomes in 2021 were higher than in 2019 and 2020.

By supporting families through direct payments and the expanded child tax credit, the Biden Administration's American Rescue Plan has helped drop the child poverty rate by 38%, beat unemployment forecasts, and create job gains across all sectors. As a result of these historic measures, America now leads all G-7 economies in our pandemic recovery.

Center for American Progress:January 20 marks one year since President Joe Biden took office: It's time to take stock of the historic economic boom under his leadership.
[1/19/22]

Though the United States faces serious economic challenges amid the ongoing global pandemic, 2021 was an extraordinary year of economic growth and recovery. The country saw record job gains and an unprecedented drop in unemployment. The economy likely grew faster than in any year since 1984, as measured by real gross domestic product (GDP). In 2021, the economy not only regained all pandemic-related GDP losses—it also surpassed pre-pandemic levels. Despite elevated inflation, Americans' disposable incomes were higher in 2021 in real (inflation-adjusted) terms than they were in 2019 and 2020. Additionally, by many important measures such as savings and bank balances, Americans are more financially secure. The United States also made dramatic progress in lowering its exceptionally high rate of child poverty.

None of this was inevitable. Rather, it was the result of bold policies that bolstered the recovery and provided direct aid to households, most importantly the American Rescue Plan Act (ARPA) and the COVID-19 vaccine program. Much of this aid was disbursed to families hit hardest by the devastating economic impact of the pandemic: the unemployed, the poor, and families struggling with the high costs of raising children. Bold federal action helped families make ends meet through additional stimulus checks; expanded unemployment insurance benefits; expanded monthly child tax credit payments; and other policies. These policies addressed weaknesses in the social safety net that became more acute during the pandemic but existed well beforehand. And many of these interventions were temporary. Much work remains to not only ensure a strong recovery but also to extend progress beyond the pre-pandemic status quo toward an economy that works for all.

While the challenges are urgent and real, the fact is that, by so many key measures, the economy today is booming. This Biden Boom has been particularly strong for workers—who have access to better-paying jobs—and are seeing their wages growing after decades of seeing economic benefits accrue to the wealthy and corporations.

More jobs were added, and unemployment fell faster than ever before

The U.S. economy has added jobs in record numbers since President Biden took office, gaining an average of 565,000 per month, and 6.2 million in total from January 2021 through December 2021. (see Figure 1) 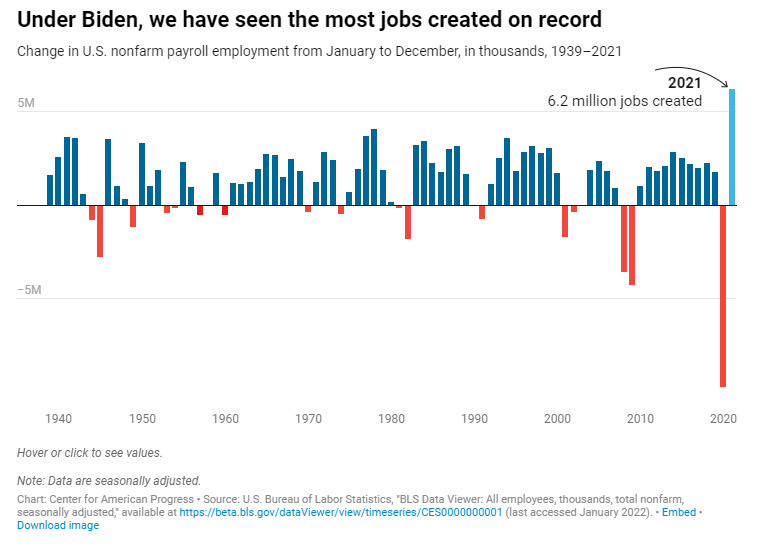 The unemployment rate fell at a record pace (see Figure 2)—and much faster than economic experts projected before the passage of ARPA. (see Figure 3) Last February, the Congressional Budget Office forecasted that the U.S. unemployment rate would not reach 3.9 percent until 2026. Thanks to ARPA, that benchmark was reached four years earlier. 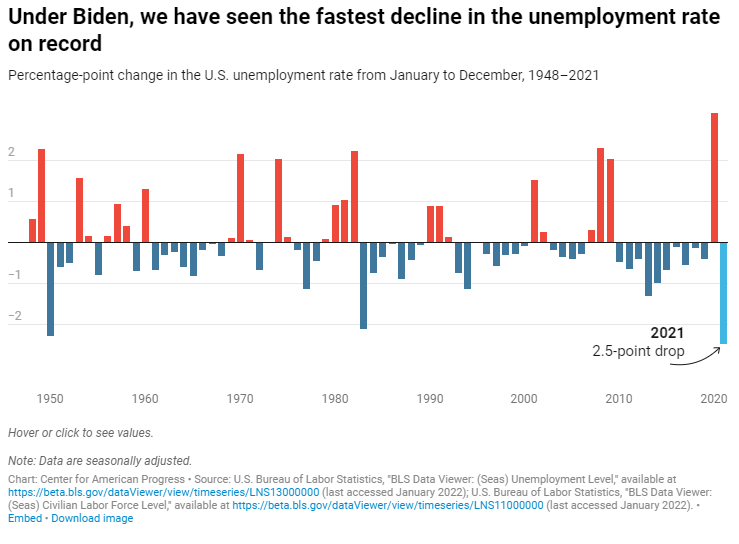 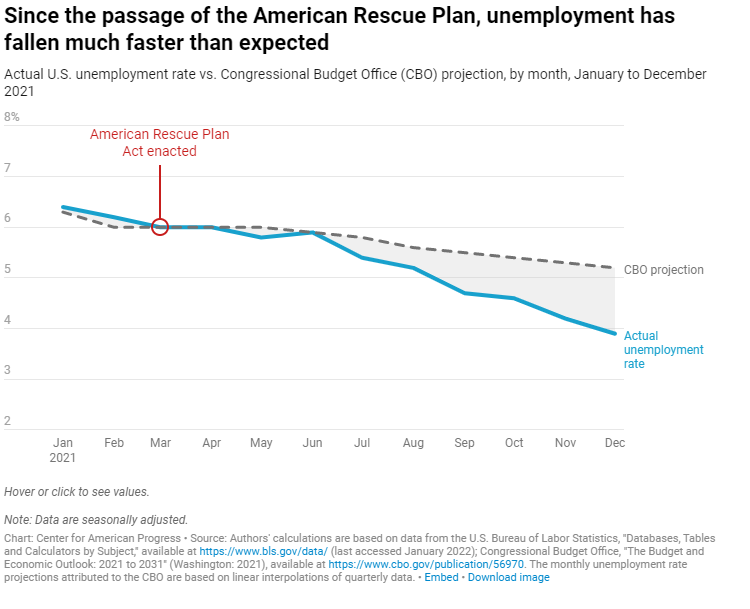 Every broad sector of the economy gained jobs in 2021. (see Figure 4) The private sector accounted for 5.9 million of the 6.2 million total jobs created from January to December. 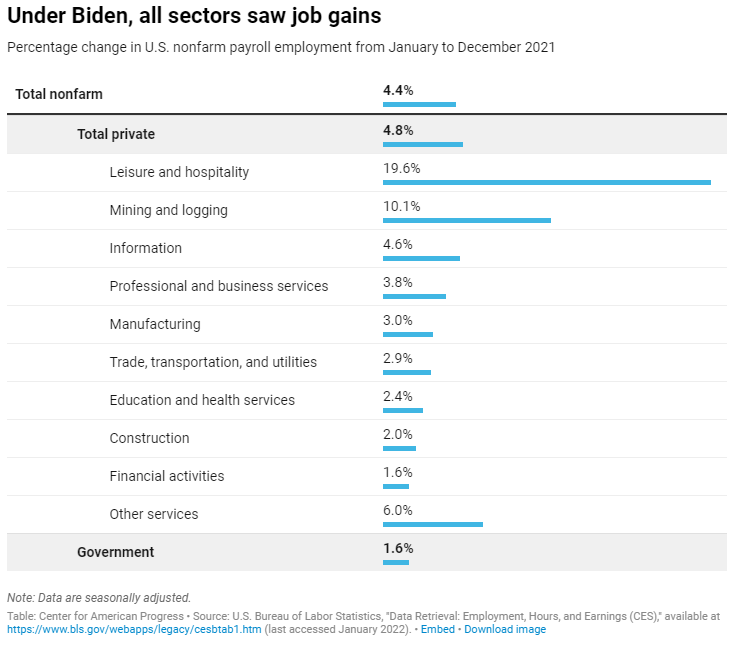 In the second quarter of 2021, the United States surpassed its pre-pandemic level of economic output. The United States was the first country in the G-7—the seven leading advanced economies—to recover all real GDP lost during the pandemic. (see Figure 5) Real GDP growth is estimated to be 5.5 percent for 2021, which would be the highest rate of GDP growth in nearly four decades.

Real disposable incomes were up and poverty fell despite inflation

Severe pandemic-related disruptions to supply chains amid the global recovery, coupled with changing consumer buying patterns, led to increased levels of inflation in 2021. Prices were substantially higher for many goods and services. But even with inflation taken into account, Americans still had more disposable income—that is, money available to spend or save as one wishes—in 2021 than in either 2020 or 2019. (see Figure 6) This is the result of several factors, including employment gains, wage growth—particularly amongst low-wage workers—and the direct aid to families provided by ARPA, including the $1,400-per-person economic impact payments and the major expansion of the child tax credit. 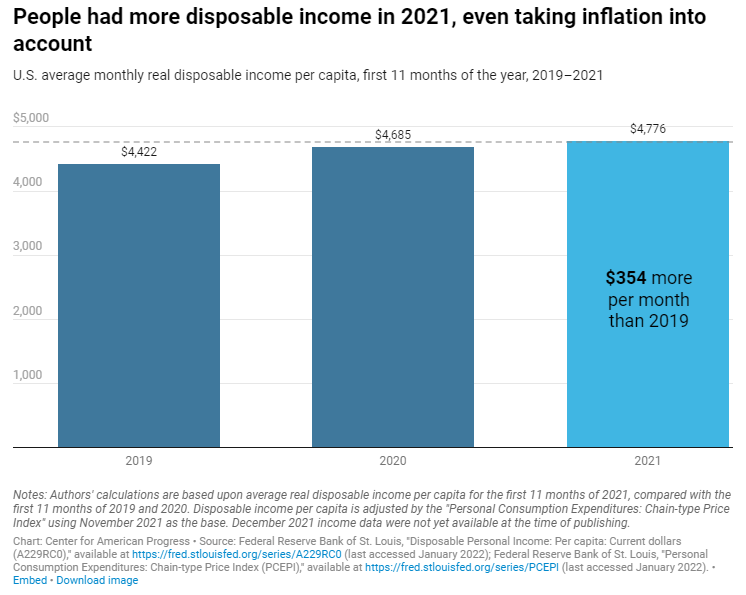 Though rising prices led to a sense of unease, by a host of measures, Americans' financial security was generally stronger than in prior years. Propelled by gains in home values and retirement savings, the net wealth of the bottom 80 percent of Americans by income increased by $4 trillion during the first three quarters of 2021. Retirement security was greatly enhanced for many Americans, with the stock market seeing large gains in 2021: The S&P 500 went up 27 percent and notched 70 all-time highs in 2021, a record that is second only to 1995. Americans also had more money in their checking accounts, particularly low-income families. 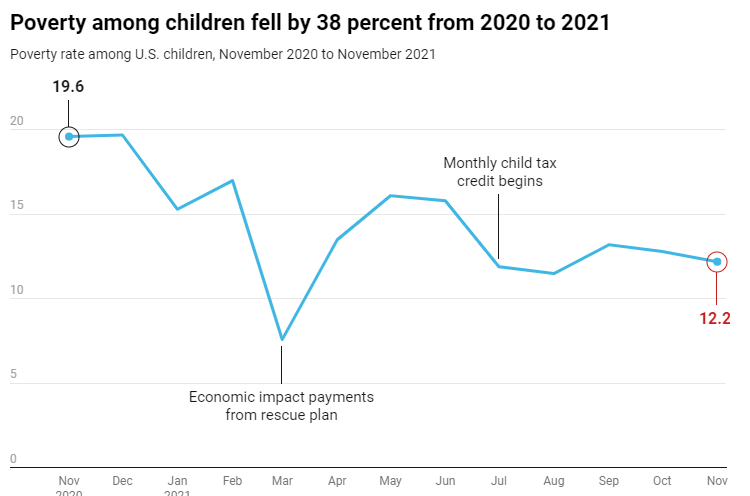 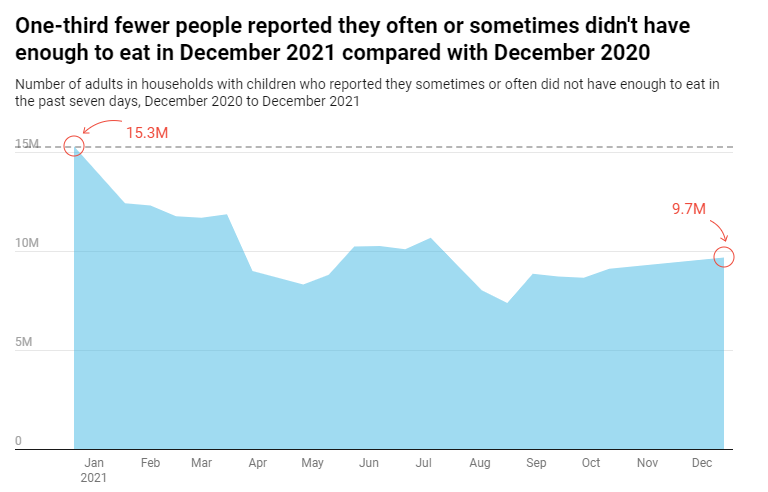 In 2021, workers, particularly low-wage workers, regained power in the labor market and used that power to demand better quality jobs and higher wages. Contrary to what headlines heralding a "Great Resignation" may suggest, workers are not quitting jobs to sit on the sidelines. (see Figure 9) Instead, they are switching jobs for higher pay and better benefits and working conditions. Low-wage workers in particular experienced strong wage growth. Americans also applied to start new businesses in record numbers in 2021. (see Figure 10) 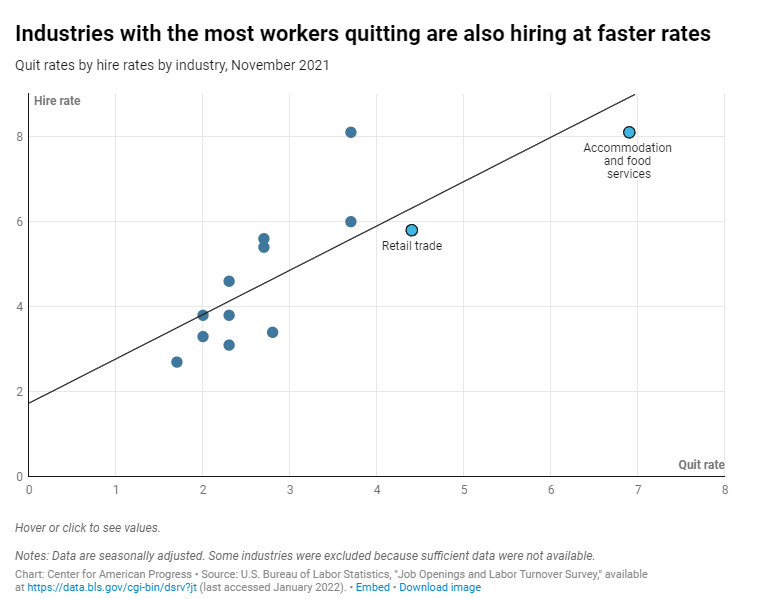 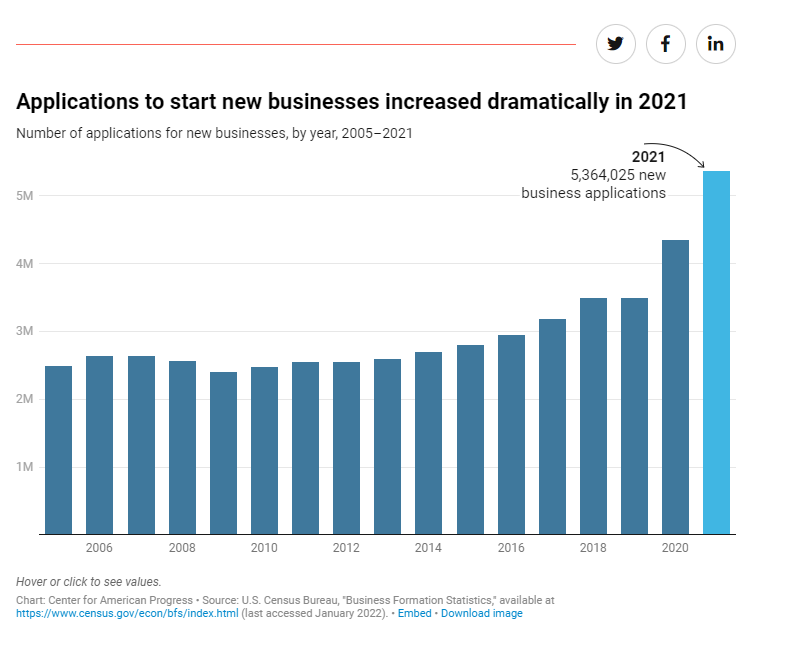 Though President Biden's first year in office was a successful one economically, major challenges remain. New variants of the COVID-19 virus have fostered renewed uncertainty. Without action to address the nation's long-term economic and climate challenges, the U.S. economy is projected to grow more slowly and the recovery from the ongoing pandemic could be in jeopardy. Last month, Goldman Sachs cut its real GDP forecast for 2022, citing the failure to enact the Build Back Better Act. Similarly, without the critical investments in the Build Back Better Act, Moody's Analytics anticipates real GDP to be lower in 2022—by 0.5 percent—and for the labor market recovery to be slower.

Moreover, the underlying structural problems that preceded the pandemic remain largely unaddressed. The United States still has historical levels of inequality, and major racial and gender disparities in income, opportunity, and wealth. Forging an era of shared prosperity where no one is left behind—including women, people of color, and people with disabilities—will require much more than simply restoring the pre-pandemic status quo. Rather, it will require shifting away from failed economic policies that favor those at the top and instead moving toward bold new investments in an economy that works for all.

Seth Hanlon is a senior fellow at the Center for American Progress. Lily Roberts is the managing director for Poverty to Prosperity. Andres Vinelli is the vice president for Business, Government, and Workers. Rose Khattar is the associate director of rapid response and analysis. Nick Buffie is a policy analyst specializing in federal fiscal policy.