A new analysis from the Committee for a Responsible Federal Budget finds that the Inflation Reduction Act will reduce the deficit by nearly $2 trillion over two decades. Scores from the official scorekeepers – the Congressional Budget Office and the Joint Committee on Taxation – show more than $300 billion in deficit reduction in the first decade.

The Inflation Reduction Act (IRA) would reduce budget deficits by over $300 billion in its first nine years, but much of the savings would take time to materialize. We estimate the IRA would reduce deficits by $1.9 trillion over two decades, including interest savings.

Over two decades, we estimate the Inflation Reduction Act includes roughly $900 billion of spending and tax cuts, $2.4 trillion of offsets, and roughly $400 billion of net interest savings. About $1.3 trillion of those offsets comes from prescription drug spending - including drug negotiations, an inflation price cap, and the repeal of a costly rebate rule. The remaining $1.1 trillion comes from higher revenue, mainly from a 15 percent corporate minimum tax and from increased Internal Revenue Service (IRS) funding to improve tax compliance. 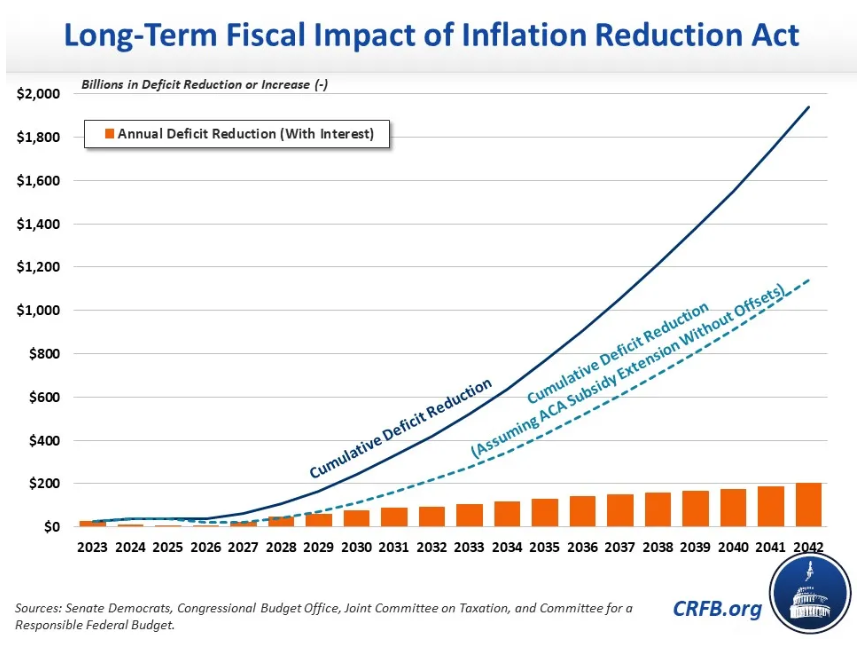 With debt headed to 140 percent of GDP in two decades, much more would need to be done to put it on a sustainable path. But the Inflation Reduction Act would be a step in the right direction.