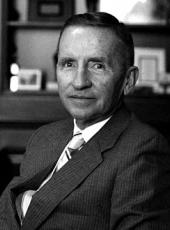 H. Ross Perot's News Conference in Dallas on Decision Not to Enter the Election

Several million volunteers in all 50 states have done a brilliant job in re-establishing a government that comes from the people. Both political parties are now squarely focused on the issues that concern the American people. Being associated with the volunteers across this country in the last few months has been one of the great experiences of my life.

Their love of their country and their idealism just is apparent as you visit with them. And throughout this effort we have said repeatedly that our objective is to improve our country, not disrupt the political process.

We have said among ourselves, and publicly, that we must win in November. We must win a majority of electoral votes. As you know, if we cannot win in November the election will be decided in the House of Representatives, and since the House of Representatives is made up primarily of Democrats and Republicans, our chances of winning would be pretty slim.

Now that the Democratic Party has revitalized itself, I have concluded that we cannot win in November and that the election will be decided in the House of Representatives. Since the House of Representatives does not pick the President until January, the new President will be unable to use the months of November and December to assemble the new government.

I believe it would be disruptive for us to continue our program since this program would obviously put it in the House of Representatives and be disruptive to the country. . . . So therefore I will not become a candidate.

And the states' petitions have not yet been turned in. I urge the volunteers to turn them in so that both parties can know exactly who the people are who are so concerned about their country's future.

If the petitions are turned in, both parties will continue to give a great deal of attention to the concerns of these fine people, and this is good for the people, for the parties to be very close to what the people want.

New York State is scheduled to start its petition signing today. I urge the volunteers in New York State to complete the process and turn in their petitions so that everybody running for President will know the names and addresses of all the people who are not happy with the way things are today.

I'd like to thank the members of the press who have been assigned to this effort. And again, I would like to thank the volunteers, the dedicated teams across the country, who have worked so valiantly to get this done. Nothing like this has ever occurred before in American politics.

I compliment you on your patriotism, your idealism, your creativity, and your ingenuity. There is no question that you have changed politics in this country and it is a change for the better. And all you have to do is listen to what both of the party candidates are saying now. They are basically focused totally on the things that so concerned you.

So to all the volunteers, I'll always look back on this with the fondest of memories, and my memories will be focused on you and your greatness, because you are America. And I am certain that the founding fathers would be very proud of you.

Thank you very much. Any questions?

Q: Mr. Perot, would you support either Mr. Clinton or Mr. Bush?

Mr. Perot: It wouldn't be appropriate for me to. If the volunteers -- any question like this, and you could ask a whole series -- if anything like this comes up, we will bring the volunteers together and say, what do you want to do? If the volunteers say we'd like to just go independently on our way, fine. If they would like to stay together and have more political influence, that's up to them. They would make that decision. All I would do would be the catalyst to bring them together and say, why don't you all kick this around and decide what you want to do. That's the way we started out running the campaign.

Q: . . . What about the reports of turmoil in the last couple of days? How did that play into your decision today?

Q: How much money did you spend?

A: Quite a bit. I don't have the numbers. The question was, how much money have I spent. It's not cheap. I think the number is somewhere up around $10 million now. But that's, that's not a factor, fortunately.

A: The overriding change was the revitalization of the Democratic Party. I decided it was definitely going into the House of Representatives. When we started ---- just go back and track it from the time we started, say, through early summer. Then there was a climate there where we could win outright.

The Democratic Party has revitalized itself. They've done a brilliant job in my opinion, in coming back, and I am hopeful that both parties will really focus on what the people are concerned about in this country.

Q: Can you be more specific about exactly what it was that you saw in the Democratic Party that made you decide and give us a little bit of a chronology of the specifics that triggered this decision on your part.

A: No, it's not ---- you're focusing too much on the Democratic Party. That was part of it. It's a piece; there are many pieces in this decision. One is if you say driving it ---- what does it take to rebuild America and solve our economic problems? I think a unified government with a strong leader, for a number of years, with the leadership in the House and Senate being very focused, very focused on the people's wishes, and having the honesty and integrity to explain to every American citizen we're talking about pain and sacrifice. To quote Senator Tsongas: there is no Santa Claus.

Now I would urge both candidates not to run on the Santa Claus theory because they're going to get a lot of soot on 'em going down the chimney, if they try that!

So I would urge both candidates to just provide the leadership, then in a perfect world we have the leadership for the House and Senate so that they're very together, working on the problems to fix them.

So having an independent injected with -- let's take the worst possible case -- Democratic House, Republican Senate, independent President. If that's not a recipe for gridlock in ego-driven Washington, I don't know what is.

So that is a factor. Then the revitalization of the Democratic Party eliminated, in my judgment, the possibility for a clean win in November.

Then it's just a whole series of factors like that, all of them just kind of, what you just call a rational analysis.

Q: Mr. Perot, when specifically did you make this decision? Today, or when?

A: I made it yesterday.