NOW, THEREFORE, by virtue of the authority vested in me as President of the United States, and Commander in Chief of the Army and Navy, I hereby authorize and direct the Secretary of War, and the Military Commanders whom he may from time to time designate, whenever he or any designated Commander deems such actions necessary or desirable, to prescribe military areas in such places and of such extent as he or the appropriate Military Commanders may determine, from which any or all persons may be excluded, and with such respect to which, the right of any person to enter, remain in, or leave shall be subject to whatever restrictions the Secretary of War or the appropriate Military Commander may impose in his discretion. The Secretary of War is hereby authorized to provide for residents of any such area who are excluded therefrom, such transportation, food, shelter, and other accommodations as may be necessary, in the judgement of the Secretary of War or the said Military Commander, and until other arrangements are made, to accomplish the purpose of this order. The designation of military areas in any region or locality shall supersede designations of prohibited and restricted areas by the Attorney General under the Proclamations of December 7 and 8, 1941, and shall supersede the responsibility and authority of the Attorney General under the said Proclamations in respect of such prohibited and restricted areas.

I hereby further authorize and direct the Secretary of War and the said Military Commanders to take such other steps as he or the appropriate Military Commander may deem advisable to enforce compliance with the restrictions applicable to each Military area hereinabove authorized to be designated, including the use of Federal troops and other Federal Agencies, with authority to accept assistance of state and local agencies.

I hereby further authorize and direct all Executive Departments, independent establishments and other Federal Agencies, to assist the Secretary of War or the said Military Commanders in carrying out this Executive Order, including the furnishing of medical aid, hospitalization, food, clothing, transportation, use of land, shelter, and other supplies, equipment, utilities, facilities and services. 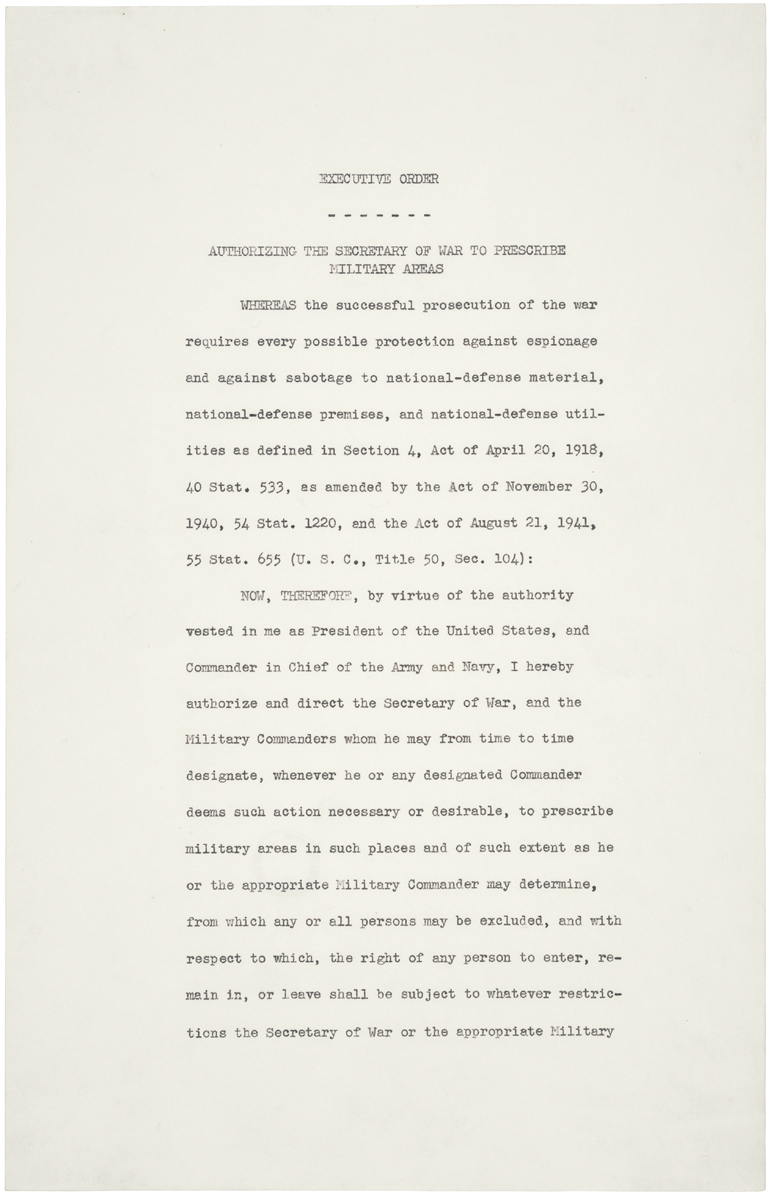