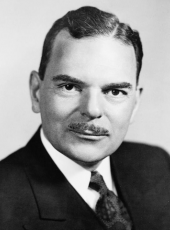 Address Accepting the Presidential Nomination at the Republican National Convention in Philadelphia, Pennsylvania

You, the elected representatives of our Republican Party, have again given to me the highest honor you can bestow—your nomination for President of the United States.

I thank you with all my heart for your friendship and your confidence. I am profoundly sensible of the responsibility that goes with this nomination. I pray God that I may deserve this opportunity to serve our country. In all humility, I accept the nomination.

I am happy to be able to say to you that I come to you unfettered by a single obligation or promise to any living person. I come free to join with you in selecting to serve our nation the finest men and women in the country, free to unite our party and our country in meeting the grave challenge of our time.

United we can match this challenge with depth of understanding and largeness of spirit; with a unity which is above recrimination, above partisanship, and above self-interest. These are articles of faith from which the greatness of America has been fashioned. Our people are eager to know again the upsurging power of that faith. They are turning to us to put such a faith at the heart of our national life. That is what we are called upon to do, and that is what we will do.

In this historic Convention, you have had placed before you six other candidates, all high-minded men of character and ability and deeply devoted to their country—Senator Raymond E. Baldwin, General Douglas MacArthur, Governor Harold E. Stassen, Senator Robert A. Taft, Senator Arthur Vandenberg, and Governor Earl Warren. Never has any party produced so many fine, able, distinguished, and patriotic men.

I am deeply moved and grateful for the generous and gracious statements they have made in this hall tonight. I hope that I may be worthy of the trust. This has been a difficult choice in an honorable contest. It has been a stirring demonstration of the life and vitality and ideals of our Republican Party.

There has been honest contention, spirited disagreement, and I believe considerable hot argument. But do not let anybody be misled by that. You have given here in this hall a moving and dramatic proof of how Americans, who honestly differ, close ranks and move forward, for the Nation's well-being, shoulder to shoulder. Let me assure you that beginning next January 20, there will be teamwork in the Government of the United States of America.

The responsibility and the opportunity that have come to our party are the greatest in the history of free government. For tonight our future —our peace, our prosperity, the very fate of freedom—hangs in a pre-carious balance.

Mere victory in an election is not our purpose, it is not our task. Our task is to fill our victory with such meaning for mankind everywhere, yearning for freedom, that they will take heart and move forward out of this desperate darkness of today into the light of freedom's promise.

Our platform proclaims the guideposts that will mark our steadfast and certain endeavor in a fearful world. This magnificent statement of principles is concise and to the point.

You unanimously adopted it, and I am very proud to support it. That platform will be the heart of the message I will take to the country. After January 20th, it will be the cornerstone of our Republican Administration.

Fortunately, we are a united party. Our nation stands tragically in need of that same unity.

Our people are turning away from the meaner things that divide us, and they have a yearning to move to higher ground, to find a common purpose in the finer things which unite us. We, the Republican Party, must be the instrument of achieving that aspiration. We must be the means by which America's full powers are released and this uncertain future filled again with opportunity. That is our pledge. That will be, for the American people, the fruit of our victory.

If this unity is to be won and kept, it must have great dimensions. Its boundaries must be far above and beyond politics. Freedom can be saved —it can only be saved—if free men everywhere make this unity their common cause.

Unity in such a cause must be the chief cornerstone of peace. A peace won at the expense of liberty is a peace too dearly bought. Such a peace would not endure. Above all other purposes, we must labor by every peaceful means to build a world order founded upon justice and righteousness. That kind of world will have peace. That kind of peace will be worth having. That is the crowning responsibility that our people have laid upon us in this solemn hour. That is the crowning task to which we here dedicate ourselves.

The unity we seek is more than material. It is more than a matter of things and measures. It is most of all spiritual. Our problem is not outside ourselves. Our problem is within ourselves. We have found the means to blow this world of ours apart, physically. We have not yet found the spiritual means to put together the world's broken pieces, to bind up its wounds, to make a good society, a community of men of good will that fits our dreams. We have devised noble plans for a new world. Without a new spirit, our noblest plans will come to nought. We pray that, in the days ahead, a full measure of that spirit may be ours.

The next Presidential term will see the completion of the first half of the twentieth century. So far it has been a century of amazing progress and of terrible tragedy. We have seen the world transformed. We have seen man-kind's age-long struggle against nature crowned by extraordinary success.

Yet our triumphs have been darkened by bitter defeats in the equally ancient struggle of men to live together in peace, security and under-standing. For this age of progress, this twentieth century, has been dominated by two terrible world wars and, between the wars, the worst economic depression in the history of mankind.

We must learn to do better. The period that is drawing to a close has been one of scientific achievement. The era that is opening before us must be a period of human and spiritual achievement.

We propose, in this Convention, and as a party, and as a government, to continue to carry forward the great technological gains of our age. We shall harness the unimaginable possibilities of atomic energy, to bring men and women a larger, fuller life. But there is something more important than all this. With all the energy, intelligence and determination which mortal heart and mind can summon to the task, we must solve the problem of establishing a just and lasting peace in the world, and of securing to our own and other like-minded people the blessings of freedom and of individual opportunity.

To me, to be a Republican in this hour is to dedicate one's life to the freedom of men. As long as the world is half free and half slave, we must peacefully labor to help men everywhere to achieve liberty.

We have declared our goal to be a strong and free America in a free world of free men—free to speak their own minds, free to develop new ideas, free to publish whatever they believe, free to move from place to place, free to choose their occupations, free to enjoy and to save and to use the fruits of their labor, and free to worship God, each according to his own concept of His grace and His mercy.

When these rights are secure in this world of ours, the permanent ideals of the Republican Party shall have been realized.

The ideals of the American people are the ideals of the Republican Party. We have tonight, and in these days which preceded, here in Philadelphia lighted a beacon, in this cradle of our own independence. We have lighted a beacon to give eternal hope that men may live in liberty with human dignity and before God, and loving Him, stand erect and free.