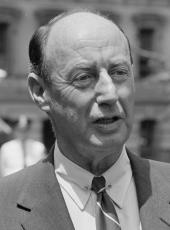 Mr. President, Ladies and Gentlemen of the Convention, My Fellow Citizens.

I accept your nomination and your program.

I should have preferred to hear those words uttered by a stronger, a wiser, a better man than myself. But, after listening to the President's speech, I even feel better about myself. None of you, my friends, can wholly appreciate what is in my heart. I can only hope that you understand my words. They will be few.

I have not sought the honor you have done me. I could not seek it, because I aspired to another office, which was the full measure of my ambition, and one does not treat the highest office within the gift of the people of Illinois as an alternative or as a consolation prize.

I would not seek your nomination for the Presidency, because the burdens of that office stagger the imagination. Its potential for good or evil, now and in the years of our lives, smothers exultation and converts vanity to prayer.

I have asked the Merciful Father -- the Father of us all -- to let this cup pass from me, but from such dreaded responsibility one does not shrink in fear, in self-interest, or in false humility. So, "If this cup may not pass from me, except I drink it, Thy will be done."

That my heart has been troubled, that I have not sought this nomination, that I could not seek it in good conscience, that I would not seek it in honest self-appraisal, is not to say that I value it the less. Rather, it is that I revere the office of the Presidency of the United States. And now, my friends, that you have made your decision, I will fight to win that office with -- with all my heart and my soul. And, with your help, I have no doubt that we will win.

You have summoned me to the highest mission within the gift of any people. I could not be more proud. Better men than I were at hand for this mighty task, and I owe to you and to them every resource of mind and of strength that I possess to make your deed today a good one for our country and for our party. I am confident too, that your selection for -- of a candidate for Vice President will strengthen me and our party immeasurably in the hard, the implacable work that lies ahead of all of us.

I know you join me in gratitude and respect for the great Democrats and the leaders of our generation whose names you have considered here in this convention, whose vigor, whose character, whose devotion to the Republic we love so well have won the respect of countless Americans and have enriched our party. I shall need them; we shall need them, because I have not changed in any respect since yesterday.

Your nomination, awesome as I find it, has not enlarged my capacities, so I am profoundly grateful and emboldened by their comradeship and their fealty, and I have been deeply moved by their expressions of good will and of support. And I cannot, my friends, resist the urge to take the one opportunity that has been afforded me to pay my humble respects to a very great and good American, whom I am proud to call my kinsman, Alben Barkely of Kentucky.

Let me say, too, that I have been heartened by the conduct of this convention. You have argued and disagreed, because as Democrats you care and you cared deeply. But you have disagreed and argued without calling each other liars and thieves, without despoiling our best traditions --you have not spoiled our best traditions in any naked struggles for power.

And you have written a platform that neither equivocates, contradicts, nor evades. You have restated our party's record, its principles and its purposes, in language that none can mistake, and with a firm confidence in justice, freedom, and peace on earth that will raise the hearts and the hopes of mankind for that distant day when no one rattles a saber and no one drags a chain.

For all things I am grateful to you. But I feel no exultation, no sense of triumph. Our troubles are all ahead of us. Some will call us appeasers; others will say that we are the war party. Some will say we are reactionary; other swill say that we stand for socialism. There will be inevitable -- the inevitable cries of  "throw the rascals out," "it's time for a change," and so on and so on.

We'll hear all those things and many more besides. But we will hear nothing that we have not heard before. I'm not too much concerned with partisan denunciation, with epithets and abuse, because the workingman, the farmer, the thoughtful businessman, all know that they are better off than ever before, and they all know the Great Depression under the hammer blows of the Democratic party.

Nor am I afraid that the precious two-party system is in danger. Certainly the Republican party looked brutally alive a couple of weeks ago -- and I mean both Republican parties. Nor am I afraid the Democratic party is old and fat and indolent. After a hundred and fifty years, it has been old for a long time, and it will never be indolent, as long as it looks forward and not back, as long as it commands the allegiance of the young and the hopeful who dream the dreams and see the visions of a better America and a better world.

You will hear many sincere and thoughtful people express concern about the continuation of one party in power for twenty years. I don't belittle this attitude. But change for the sake of change has no absolute merit in itself. If our greatest hazard is preservation of the values of Western civilization, in our self-interest alone, if you please, it is the part -- is it the part of wisdom to change for the sake of change to a party with a split personality, to a leader, whom we all respect, but who has been called upon to minister to a hopeless case of political schizophrenia?

If the fear is corruption in official position, do you believe with Charles Evans Hughes that guild is personal and knows no party? Do you doubt the power of any political leader, if he has the will too do so, to set his own house in order without his neighbors having to burn it down?

What does concern me, in common with thinking partisans of both parties, is not just winning this election but how it is won, how well we can take advantage of this great quadrennial opportunity to debate issues sensibly and soberly. I hope and pray that we Democrats, win or lose, can campaign not as a crusade to exterminate the opposing party, as our opponents seem to prefer, but as a great opportunity to educated and elevate a people whose destiny is leadership, not alone of a rich and prosperous, contented country, as in the past, but of a world in ferment.

And, my friends even more important than winning the election is governing the nation. That is the test of a political party, the acid, final test. When the tumult and the shouting die, when the bands are gone and the lights are dimmed, there is the stark reality of responsibility in an hour of history haunted with those gaunt, grim specters of strife, dissension, and materialism at home and ruthless, inscrutable, and hostile power abroad.

The ordeal of the twentieth century, the bloodiest, most turbulent era of the whole Christian age, is far from over. Sacrifice, patience, understanding, and implacable purpose may be our lot of years to come. Let's face it. Let's talk sense to the American people. Let's tell them the truth, that there are no gains without pains, that there -- that we are now on the eve of great decisions, not easy decisions, like resistance when you're attacked, but a long, patient, costly struggle which alone can assure triumph over the great enemies of man -- war, poverty, and tyranny -- and the assaults upon human dignity which are the most grievous consequences of each.

Let's tell them that the victory to be won in the twentieth century, this portal to the Golden Age, mocks the pretensions of individual acumen and ingenuity, for it is a citadel guarded by thick walls of ignorance and of mistrust which do not fall before the trumpets' blast or the politicians' imprecations or even a general's baton. The are, they are, my friends, walls that must be directly stormed by the hosts of courage, of morality, and of vision, standing shoulder to shoulder, unafraid of ugly truth, contemptuous of lies, half truths, circuses, and demagoguery.

That, that, I -- I think, is our ancient mission. Where we have deserted it, we have failed. With your help, there will be no desertion now. Better we lose the election than mislead the people, and better we lose than misgovern the people. Help me to do the job in these years of darkness, of doubt, and of crisis which stretch beyond the horizon of tonight's happy vision, and we will justify our glorious past and the loyalty of silent millions who look to us for compassion, for understanding, and for honest purpose, Thus we will serve our great tradition greatly.

I ask of you all you have. I will give you all I have, even as he who came here tonight and honored me, as he has honored you, the Democratic party, by a lifetime of service and bravery that will find him an imperishable page in the history of the Republic and of the Democratic party -- President Harry S. Truman.

And finally, my friends, in this staggering task you have assigned me, I shall always try "to do justly, to love mercy, and to walk humbly with my God."