Memoranda to Other Recent Presidents

By
The American Presidency Project

1. How does President Trump's pace of executive orders compare to his predecessors? (see graph below)

His written orders include documents titled "Executive Order," Memorandum, and Proclamation. His pace is similar to that of President Obama. Click here to see a list of the Obama and Trump orders (with links to the text) side-by-side by day. 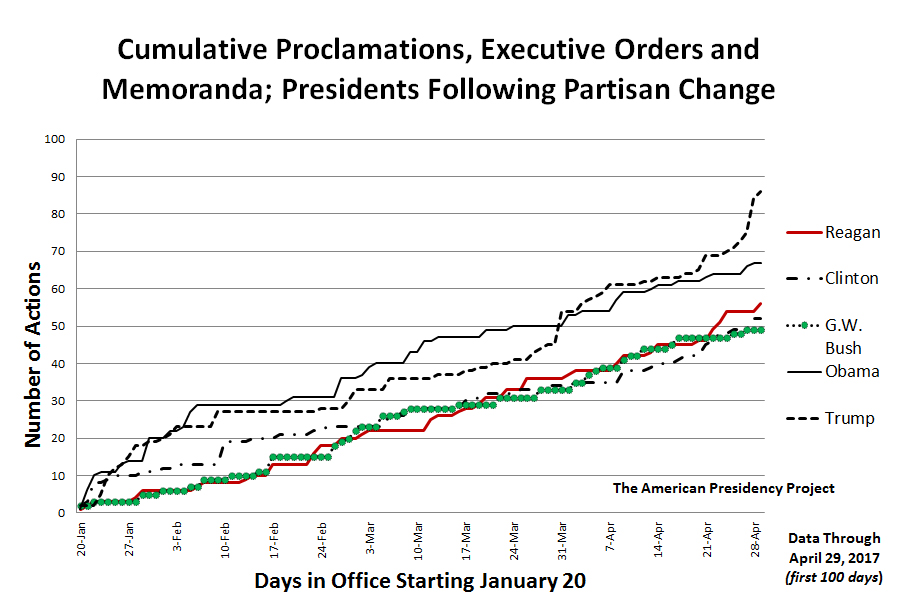 2. Is the content or subject matter of Trump's executive orders thus far markedly different than those issued in the early days of previous administrations?

Typically a President's initial orders are intended to immediately make good on campaign promises and commitments. As a result, these include specific actions repudiating some of the prior administration's policies. In that respect, Trump is very much in the normal stream.

However, often campaign commitments cannot be fulfilled by executive action (e.g., to change taxes, permanently cut spending, increase the size of the military, enact a new system of regulation of financial institutions). An aggressive legislative program would be needed, and several of President Trump's orders are directed toward calling for prepartion of that program.

In some instances, President Trump is talking a very expansive view of the discretion available to him. We now can be confident that that view will be challenged in various venues.

3. Does this White House's roll out seem different, especially on with respect to border security and entry of foreigners?

These actions are unusual in their scope; in the chaotic and rapid pace of their introduction; and in the fact that the President had on many prior occasions voiced his interest in considering religion in immigration and refugee vetting. Typically executive orders that involve complex implementation challenges would be preceded by extensive advance consultation and notice. This order was intended to have a big effect, but it seems unlikely the planners of this order completely foresaw the breadth and intensity of the negative response.

4. How does the reaction—ranging from public protests to court filings—compare to the reaction to executive orders from previous administrations?

It's very unusual to have courts immediately take action about the content of an executive order; and so the multiple actions in Federal courts are remarkable. However, it became fairly common in the Obama years for executive actions (i.e., regulatory actions and other discretionary actions taken by the executivbe branch) to be the object of litigation, some of it successful. It's not surprising, then, that Democrats appear to have approached the Trump years by preparing to respond in kind.

We can't recall any instances of an early presidential order generating the broad public protest of Mr. Trump's immigration order. Of course, Mr. Trump is a different kind of president; he has successfully sought to generate strong public responses throughout the campaign.

This note was initially drafted early in the Trump Administration and updated periodically up until the 100th day.