Presidents starting at least with Harry Truman, have met with "Girls Nation" delegates at the White House. Often the President's remarks turned to the future careers of the young women in the group. John Kennedy surmised that, "it may not be possible for you to be President." But, he added, "I am sure we are talking to a future First Lady."

Truman, Carter. and Clinton all spoke encouragingly of the possibility for the girls of becoming president. Truman warned in 1949 that in the future, "you might have this terrible job that I have."

Carter observed that the Constitution did not guarantee equality to women, and advocated passage of the Equal Rights Amendment. He added that "I don't have any doubt that before too long we will have our first woman President." 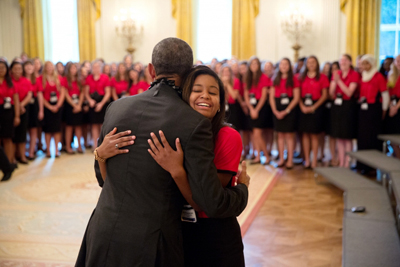 Bill Clinton recalled Kennedy's statement, made the same year when he was a part of Boys Nation. Clinton stated, "Well today a lot of things have changed. First of all, I think that it is a very honorable thing to be the First Lady. Some day there will be a First Man...Thirty years from now the delegates from Girls Nation may well be in the Rose Garden being addressed by a woman President."

The other presidents were positive and encouraging, but did not suggest any might reach the Presidency. Nixon, in a very long set of remarks touching directly on the issue of "Women's Lib," urged the girls not to underestimate the influence of "homemakers, wives and mothers." "Whether you run for office or not, certainly in the capacity that you have in the homes you build, you will have an influence that will mean that the young people in the next generation, that you will help to raise, will be a generation that will be proud of America."

Harry S Truman, August 25, 1949:  "Because, the responsibility of government-this Government--in the next few years is going to be on your shoulders. All of us old people will be out of the way by that time, and you not only may be able to be an ambassador, you might have this terrible job which I have; that is, President of the United States, and you might get a chance to live over there in that great white jail, with the balcony and everything."

Dwight D. Eisenhower, August 1, 1957:  "I can't help complimenting you on the opportunity that is yours to come here and by actually making contact with the different functions of government, getting a better understanding of what this enormous thing is that we call the American government. It has an influence on your lives. It will have influence on your lives as long as you live--on everybody else around you. The more you know about it the better will be your ability to deal with it, to work with it, to make certain that it does what it should and doesn't interfere with you where it shouldn't."

John F. Kennedy, August 2, 1963:  "So we are very pleased to have you here. I can think of no guests who are more appropriately welcome, and I am confident that some day it is very possible--well, it may not be possible for you to be President, but at least I am sure we are talking to a future First Lady."

Lyndon B. Johnson, August 4, 1967:  "So increasingly women are seeking the right to choose how they make their contributions to their family and their community. I think it is perfectly clear that a woman does not need a professional career to either serve her community or her country in most significant ways."

Communities all over this land need women who will speak for justice, where there is injustice, who will demand attention to the people's needs, who will break the silence of complacency, who will carry the battle flag against inertia--which is the main anchor dragging against the progress in our country.

Richard M. Nixon, August 6, 1971:  "We have got to have the best of all our people....That is what we need, and above everything else I am convinced that you will play a role. Some of you may be tempted to think, "Unless I play a role of spending my whole time in politics or business, in other words, unless I become like a man"--and this is what our Women's Lib people might say--"then I really haven't done my share."

Don't you believe it. There are millions of women in this country who, without ever running for office, without ever becoming involved in business full time, have an influence on the country as homemakers, as wives, and as mothers, that is perhaps far greater than most of the men.

Don't ever downgrade that. It is terribly important, and I just know as I look at this group that you are going to be fine Americans in the years ahead. If you run for office, you are probably going to do pretty well. And whether you run for office or not, certainly in the capacity that you have in the homes you build, you will have an influence that will mean that the young people in the next generation, that you will help to raise, will be a generation that will be proud of America and be very worthy of America."

Gerald R. Ford, July 18, 1975:  "We have a lot of problems, but you can, in my judgment, help us solve some of those problems now and obviously in the future. In a few years, all of you will be down here running the place, so help us get it straightened out now so that it will be a better place for you to get things done in the future. We are proud of you, we welcome you, and we wish you God's blessing."

Jimmy Carter, July 18, 1980:  "The last thing I want to say is that you will yourself have to face controversial issues. One example of that, and I, won't dwell on it, is the growth of our country in the last 200 years toward full freedom and equality for our people. took us 90 years after the Declaration Independence before we eliminated legal slavery in the United States. It took us another hundred years before the American law and the rulings of the Supreme Court eliminated legal discrimination against people because they were black; 190 years to make those changes. We have now embedded in our Constitution and laws guaranteed equality for every person in the Nation except one group, and that's women… I think the equal rights amendment ought to be ratified, and I hope that it will be ratified.

...It's inspiring to a President to see new leadership coming along with idealism and hope and expectation and confidence and happiness and pleasure and appreciation of freedom, but also with the sober realization that in just a few years you'll have to take on the responsibilities of a family or a community or perhaps an entire State, as a Governor, or perhaps a nation.

And maybe someday, after Amy serves as the first woman President, maybe- [laughter] -or maybe she could follow one of you—you'll see that this office is open to women, as well. I don't have any doubt that before too long we will have our first woman President. It'll be a great step forward for our country, and will prove to the world that we are indeed a nation of equality and hope and freedom."

Ronald Reagan, July 18, 1986:  "You know, part of a President's job is to prepare our nation for the future, for the years and even the decades ahead. And lately I've been making a point of speaking to those to whom our future belongs, young Americans like yourselves. This spring I spoke to a group of high school students here in the Rose Garden. The weather was a little more comfortable than this. And then last month I went up to Glassboro, New Jersey, to speak at a high school commencement. And both times I shared thoughts similar to those I'd like to discuss with you today: my hopes for world peace and freedom, my conviction that Americans of your generation have every reason to look to our country's future with confidence and self-assurance."

William J. Clinton, July 22, 1993:  "Thirty years ago, when the delegates from Girls Nation came to the White House in the same summer that I was here, my next-door neighbor represented our State at Girls Nation. It was a great thrill for me, and she's still one of my closest friends... And when she was here where you are, President Kennedy told the young women there assembled that it might be possible for one of them to become President, but it was not likely. And almost as a consolation prize, he said, "At least I'm sure I'm talking to a future First Lady." Well, today a lot of things have changed. First of all, I think that it is a very honorable thing to be the First Lady. Some day there will be a First Man. And I think it is not unlikely that 30 years from now the delegates from Girls Nation may well be in the Rose Garden being addressed by a woman President who is in this crowd today."

Photo: President Barack Obama gets a hug from Johnsenia Brooks after a group photo with American Legion Girls Nation delegates in the East Room of the White House, July 30, 2015. (Official White House Photo by Pete Souza)