Presidents and Midterm Elections: What Historical Data Suggest about 2018

Using the data we provide in our data archive "Seats in Congress Gaines/Lost by the President's Party in Mid-Term Elections" we estimate GOP seat losses of 33 in the House and 1 in the Senate.  Of course, these data are aggregated and take no account of local political conditions, candidates, or issues. 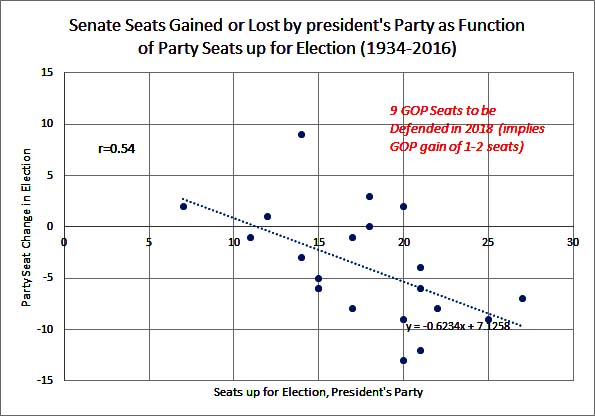 Partisan seat swings in midterm elections are consistently correlated with two familiar factors.  The first is the public's assessment of the incumbent President.  The second is the number of seats in Congress controlled by the President's party.

In our table of midterm seat swings, starting with the 1934 election, we provide historical data on seat swings and seats defended, both in the House and the Senate.  We also provide data on public approval (Gallup poll) at various points prior to the election.

What about the combined effect of approval and seats to be defended?  They both matter.

For the House, most of the work is done by approval.  The joint prediction of a GOP loss of 33 House seats is the same as for approval alone (but the "fit" is better).  The range of the prediction in 2018 is for a GOP loss of between -15 and -51 seats.  (In 2010, the House Democrats lost 63 seats with Obama approval and seats to defend similar to Trump's in 2018.)

For the Senate, approval and seats together predict a 2018 GOP loss of one Senate seat.  The error range of that prediction is between -5 and +2.