Biden in Action: the First 100 Days

Biden compared to prior presidents.

Now that we have reached the end of  Biden first 100 days, it’s time to ask “what’s the point of the 100 day watch?” What meaningful conclusions can we draw about a Presidency after 100 days?

Mistakes and Stumbles. Many presidents have blundered within 100 days of taking office. Those stumbles can be hard to overcome. Kennedy permitted the disastrous Bay of Pigs invasion. Carter proposed eliminating 19 water projects—an economy move that backfired by alienating Congressional Democrats. Clinton had two nominees withdraw because of failure to pay social security tax for household employees. The Administration seemed to be incompetent.  The Biden Administration has—so far—avoided similar stumbles. We recall that several administrations blundered after the 100-day mark.

Crises and Disasters. Some Presidents take office at a moment of clear crisis.  This gives them focus and clarity of purpose. For FDR, Reagan, and Obama, it was the economy. For Nixon it was the environment and Vietnam. Biden faces the COVID-19 pandemic and related economic crisis, climate change, and a national upheaval over institutionalized racism.

Political and Electoral Circumstances. Without exception, Presidents judged in retrospect to have been “transformative,” have worked in very favorable political conditions. They won election by very large majorities and enjoyed strong ideological support from majority coalitions in Congress. Biden has neither of these.

Early-term Legislative Victories. FDR’s many early-term legislative victories are the exception among modern Presidents, but have become the standard of comparison. Biden has ended his 100 days with only one major legislative victory (The American Rescue Plan). In that respect, has equaled the record of Reagan, and bested several predecessors.

Using Executive Action. Presidents can set the agenda through words, orders, nominations, and meetings. They draw attention to their priorities with travel and public appearances. Biden has been unusual in the number of his actions and their degree of focus. We have been tracking some of these actions since January 20, 2021.

Both graphs show the total number of Presidential Executive Orders, Memoranda, and Proclamations. Both graphs show President Biden continues to be far more active than other post-FDR presidents.[1] However, the contrast between the two graphs reveals that recent presidents have issued many more symbolic proclamations.

In the recent weeks, Biden had to deal with several issues that distracted from promoting the “American Jobs Plan” his infrastructure investment proposal. These issues included the announcement of a date for US troops to leave Afghanistan and controversy about his targets for refugee admissions to the United States. Related to this he identified a number of budgetary priorities for Congress (“Discretionary Funding Request”). The plan remains to be introduced formally as bills for Congressional consideration. In his April 28 speech to Congress, he laid out his “American Families Plan.” These two major proposals are estimated to have 10-year costs of $4.1 trillion.

Documents vs. Orders. We are counting documents. A single document may contain multiple orders. For example, Executive Order 13990 includes at least 18 kinds of statements directing a particular kind of administrative action (e.g., “immediately review,” “seek input,” “place a temporary moratorium,” “provide recommendations,” “shall rescind,” etc.).
There can be multiple instances of specific ordering language in a given order. Included among the directives in EO 13990 is the immediate revocation of: 9 prior executive orders, 3 memoranda, one pipeline permit, and the 90-day suspension of another executive order. The order specifies 13 regulations for review and revision as appropriate. So a single executive order includes language directing around 40 distinct actions. EO 13990 is just one count on the graphs below.

Orders in other document categories. Presidential orders frequently appear in documents with other kinds of category titles. An important example is President Biden’s 1/20/21 “Statement” in which he “hereby accept[s]. . . every article and clause” of the Paris Agreement of December 12, 2015. In a Letter on 1/20/21, Biden rejoined the World Health Organization. In Remarks on 2/10/21, he announced that the US was again participating with the UN Human Rights Council. In a Statement on Armenian Remembrance Day, Biden was the first US President to refer to the “Armenian genocide.”[2]
Like his predecessors, Biden issues orders continuing National Emergencies in documents called Notices. He also declares domestic Disasters and Emergencies.

Agency Action.  In the course of the 100 days, we began to see new agency action reflecting Biden’s priorities. These include the Department of Justice’s investigations of police practices in Louisville and Minneapolis. The Department of Homeland Security reversed a 2018 directive and restricted immigration enforcement in and near courthouses.  The EPA announced action to rescind 2019 limits on California’s waiver to impose strict regulations on vehicle emissions.

Theme clusters. Reflecting two of his key priorities, Biden has issued 16 documents (in the three categories we monitor) that included references to "climate change" or a "climate crisis" or the President's "Special Envoy for Climate." He has referred to COVID-19 in 51 of 106 documents. (As a reference point, in the 324 days starting in March 2020, President Trump issued 80 documents mentioning COVID-19.)

Reversals. Typically, we expect incoming presidents, especially after a change in party, to explicitly reject some policies of their predecessor. However, no recent president has reversed a predecessor’s orders as often as Biden has reversed Trump.  Biden explicitly rejects 76 prior orders (revoking, amending, suspending, reinstating, etc.) in  25 out of 106 documents. Executive Order 1401 was exclusively dedicated to revoking seven actions of President Trump.

Biden Reversals Compared. To further show Biden’s contrast with his predecessors, we compared four president in their rates of reversing orders using Executive Orders. Our findings are in the table below and also described here. We compare Biden, Trump, Obama, and Bush-43 for the period from January 20 through April 23 of their first term.
Column 1 is simply the total number of Executive Orders for each president during the period from 1/20-4/29. So, Biden published 42 Executive Orders and Trump 33.
Column 2 is the number of those Executive Orders that include revocations of prior orders. Twenty-one of Biden's 42 orders included revocations.  Trump issued 8 orders with revocations out of his 33 total.  In an irony, Trump's EO 13780 revoked his own earlier travel ban order, EO 13769.  Column 3 is the ratio of these two numbers--0.50 for Biden, 0.24 for Trump--the proportion of all Executive Orders with revocations.
Column 4 is the number of prior orders revoked. Biden revoked 67 prior orders with 21 orders. Trump revoked 13 with 8.  Column 5 is the ratio of those two number--3.3 orders revoked per "revoking order" for Biden; 1.7 for Trump.
Biden has been far more active than his immediate predecessors at undoing past action.

Court Challenges. A report in the Wall Street Journal warns that Biden's executive actions may be met with increasing pushback in the courts. Has this already started? We did a search of the Lexis/Nexis archive of legal cases. We asked how many Federal cases reported within the first 100 days of an administration (i.e.., 1/20 - 4/29) refer to "Executive Order" and the administration. We searched for Biden, Trump, Obama, Bush. There were 21 cases for Biden, 50 for Trump, 10 for Obama, and none for Bush-43. (We are not counting a lawsuit that involved Bush's actions as Texas Governor.) As a ratio to orders issued (2.0), Trump had far more court challenges in the same time period. The rates for Biden and Obama are nearly equal (~0.5). Of course, eventually, the court decision is what matters.

Our preliminary investigation shows that most of the Trump litigation involved two orders imposing a “travel ban” and another order directed against “sanctuary jurisdictions.” Only one instance of litigation involving the Biden administration directly confronted Biden orders relating to a “pause” in the removal of aliens already subject to a removal order. The most common mention of Biden orders was in the context of finding that a suit filed against the Trump Administration was mooted by a contrary Biden order.

Nominations and Confirmations. The Washington Post in collaboration with the Partnership for Public Service, have produced illuminating analyses of rates of Congressional confirmation of nominees.  In this measure Biden, as of 100 days, still lags Obama (the Post stopped reporting data for Clinton). But his confirmed appointees at the same point is greater than Trump and Bush.  Twenty-one of Biden’s Cabinet-level nominations have been confirmed (including all of the Cabinet Departments).  The Post does not report the diversity of Biden’s appointees in contrast to his predecessors, but reports suggest a substantial increase in diversity (and certainly that is the White House view).

DAY ONE priorities. The Biden campaign identified a set of “Day One” priorities.  These especially featured: Climate change (including reentering the Paris Agreement); diversity of political appointees; immigration and asylum; COVID-19 (and the related economic crisis); racial injustice; creating a path to citizenship for undocumented immigrants. By February 4, each of these has been addressed in at least one ordering document, and we have concluded that all of them were addressed in orders on “day one.” Among those actions, Biden had promised to submit legislation for Immigration Reform--which the White House announced on 1/20.  The bill was introduced in the House on 2/18/21;  Senate introduction was in the week of 2/22/21.  However, in recent weeks, controversy arose about whether Biden was reneging on his promise to restore refugee admissions in line with historic practices.

The number of non-symbolic Biden actions early in his term has exceeded the 100 day total for all predecessors except FDR.

The graphs below compares presidents who took office following a partisan change in the Presidency, starting with Franklin D. Roosevelt. So, we excluded from the analysis Harry Truman, Lyndon Johnson, Gerald Ford, and George Bush. In the graph, Republicans are represented in red and Democrats in blue.

Through 4/29/21, Biden had issued 49 proclamations of which only five are substantive. The balance are traditional symbolic calls for recognition of groups or causes (see examples above).

[1] The APP archives do not yet include the text of all FDR Executive Orders. Our graph counts are based on the 1944 collection edited by Clifford L. Lord, Presidential Executive Orders Numbered 1-8030, 1862 – 1938.  When we find the funding, we’ll complete the collection.

[2] We also note that this was not in the form of a proclamation of Armenian Remembrance Day, which would also be an additional novelty. Several prior Administrations have objected to resolutions in congress that would remember the “Armenian Genocide.” 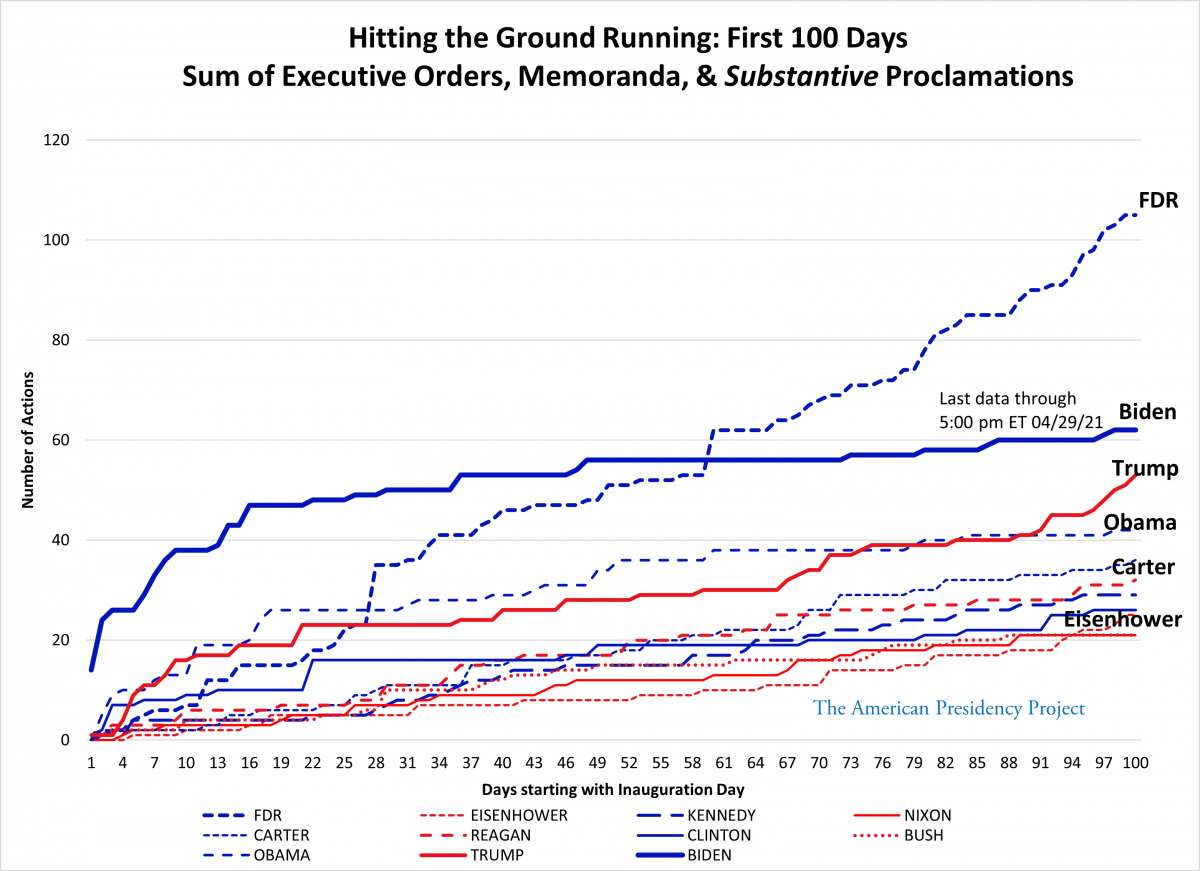 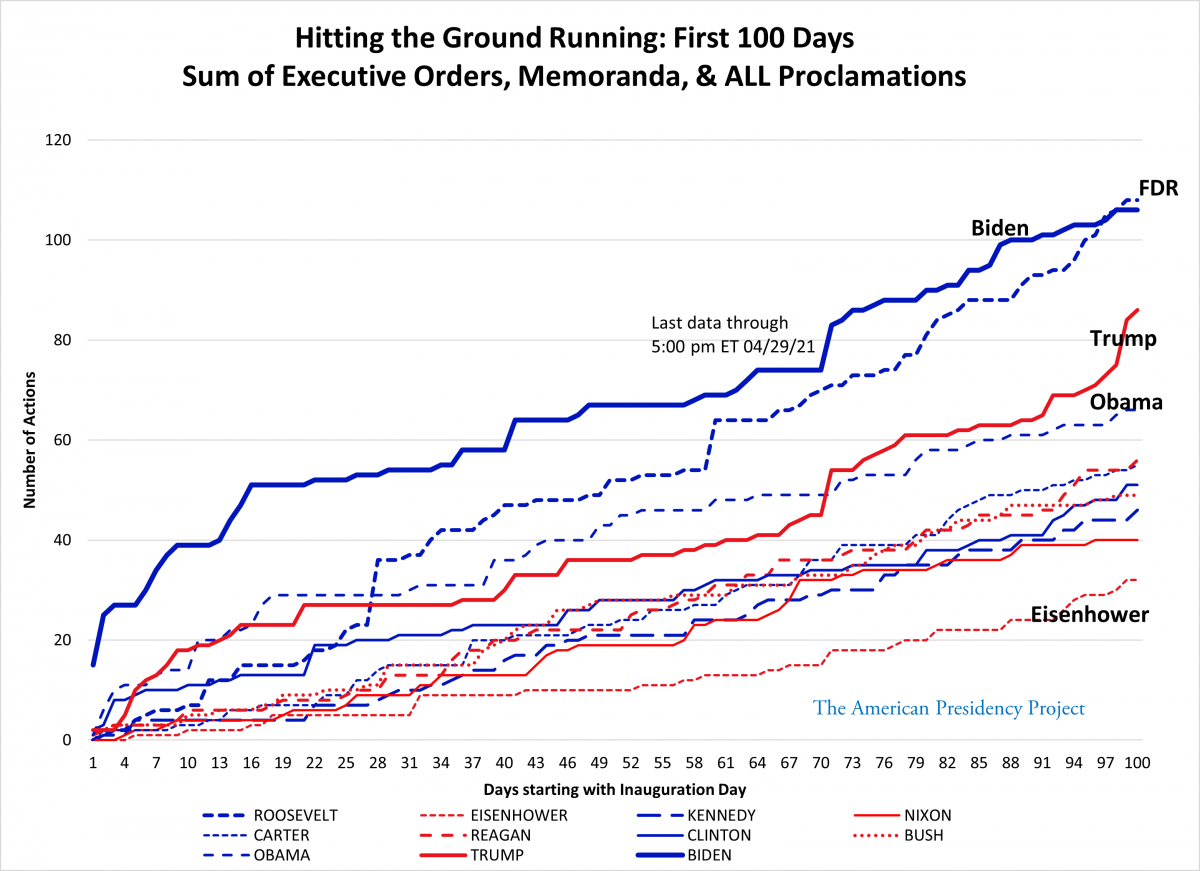