Press Release - Straight From the Headlines: Graham: My Foreign Policy Path is Tough But Necessary

National Journal: "When It Comes To Foreign Policy Credentials, He's Got His Competitors Beat."
(Marina Koren, "Lindsey Graham on ISIS, Putin, and Being a 'Threat-Mongerer,'" National Journal, 07/08/15) 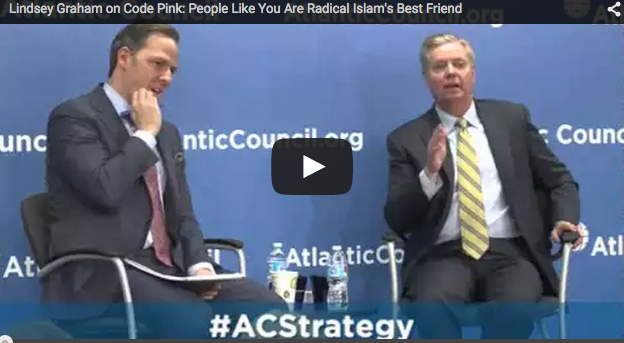 "...when it comes to foreign policy credentials, he's got his competitors beat. Graham has long been a vocal advocate for a more-robust defense program and is one of the most respected foreign policy hawks in the Senate, where he's been since 2003, long before Marco Rubio, Rand Paul, and Ted Cruz arrived. His tenure there, plus his time on the Senate Armed Services committee, puts his national security chops well above those of his competitors in the Senate, and certainly above his competitors who are governors. He spent more than 30 years in the Air Force before retiring last month and has traveled to the Middle East dozens of times."
(Marina Koren, "Lindsey Graham on ISIS, Putin, and Being a 'Threat-Mongerer,'" National Journal 07/08/15)

Defense One: "Graham Explicitly Contrasted His National Security With That Of His Rivals"
"Graham explicitly contrasted his national security specificity with that of his rivals... 'Simply put, President Obama's foreign policy has been a disaster and former Secretary of State Hillary Clinton was one of his chief architects,' Graham said, employing one of his go-to stump speech lines..." (Molly O'Toole, "Lindsey Graham Gets Specific: We Need 20,000 U.S. Troops in Iraq and Syria," Defense One, 07/08/15)