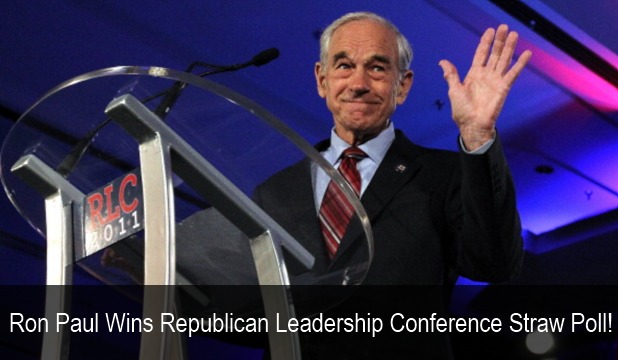 LAKE JACKSON, Texas — Today, 2012 GOP presidential candidate Ron Paul again took first place in a straw poll at a major conservative gathering. The Republican Leadership Conference held in New Orleans was the setting for Congressman Paul's latest victory, winning with 40 percent of the vote over the rest of the Republican field.

"This win is just the latest indicator of how the majority of American opinion is turning in Ron Paul's direction," said Jesse Benton, Paul campaign chairman. "Listening to all the other speakers and candidates, you hear them saying the things that Dr. Paul has been saying for years, and they are saying it because they know that's what Americans are looking for right now.

"The American people want and deserve someone who will tell them the truth, tell them what needs to be done, and who has an untouchable record of consistency to back it up."