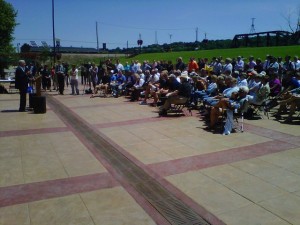 Ron Paul speaking in Dubuque June 13, 2011"I am proud to fully support Ron Paul as the Republican nominee for President," said Jeremiah Johnson. "I firmly believe he is the candidate who best understands our economy and has the best plan to get our nation past these difficult economic times." Johnson is a Republican Central Committee member representing the first Congressional District in Iowa.

Being deemed "The Godfather of the Tea Party" by Fox News, Paul's endorsement from a key tea party leader is further evidence of the strong tea party support he has across Iowa.

"Ron Paul represents the return to fiscal responsibility that the Tea Party is looking for," said Jeff Leucke, organizer of the Dubuque Tea Party. "Ron Paul gets it more than any other Republican candidate and he has the knowledge and experience necessary to take on Obama in November and win."

The announcement of these endorsements came at an event Paul held Monday in Dubuque as he met with Iowa voters and members of the media. The event was Congressman Paul's sixth visit to Iowa in as many weeks.