While the data fluctuates week to week, what's clear in the trends is that President Biden's economic plan is working. Thanks to a robust vaccination program and President Biden's American Rescue Plan, America is getting back to work and the economy is booming.

Early Friday, the government reported that the economy added 850,000 jobs last month — a welcome pickup from the slower pace of jobs growth over the past three months and a sign that overall economic growth is tracking stronger than in the first quarter of the year. We are still roughly seven million jobs down from prepandemic levels of employment, unemployment among Black and Hispanic workers remains distressingly high, and millions have yet to return to the labor force. But if policymakers hold steady, we are also on the verge of creating a foundation for a more inclusive, resilient recovery — much more robust than what we experienced after the Great Recession, despite having suffered a much bigger jobs hit.

Recoveries from recessions can often feature a burst of pent-up demand, but the current boom has few precedents. If the Federal Reserve is right in its forecast that economic growth will reach 7 percent in 2021, it will be the strongest performance since the recovery from the double-dip recession of the early 1980s. But this good news is no accident. 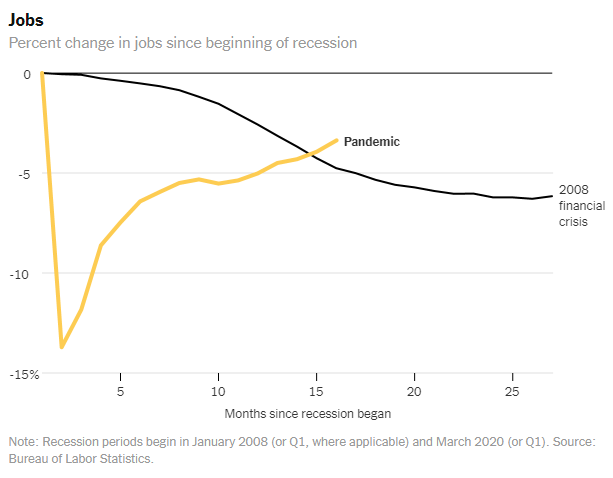 It may upset partisans who want to give no credit to this administration — or the previous one — but this reopening is validating the past year's policy experiment of being bolder, more generous and quicker during a crisis.

The early successes of this recovery stem from how both Congress and the Federal Reserve, our nation's central bank, tackled the pandemic recession using a new approach: go early and go big on policy support. As the economy shut down, policymakers bucked some conventional wisdom and entrusted households and businesses with cash support that had few strings attached. Congress passed stimulus measures with the general mantra that the cost of doing too little was greater than potentially doing a bit too much.

In the last downturn, when the federal government did less, people in their prime working years were still dropping out of the labor force six years into the recovery, and labor's share of national income fell to an all-time low in 2014. Mortgage delinquencies and foreclosures remained near record highs. In 2011, the gap by which unemployment among Black people exceeded that among white people had risen to a multidecade high.

This time, we are seeing the benefits of policymaking that isn't miserly. Businesses that were expected to use funds to pay employees and cover essential operating expenses generally did so; workers who were unemployed received additional cash support, which they put right back into the economy to cover necessities and, yes, buy some stay-at-home goods.

The current burst in growth and hiring has had a less welcome companion, inflation. The Fed's preferred gauge of consumer inflation rose 3.9 percent in May from a year earlier — and may go higher in coming months — fueling intense speculation among adherents of conventional economics about whether we will see a return to the high inflation of the 1970s or a loss of confidence in the U.S. dollar.

Still, it is worth remembering that there is a deliberate reason for this new policy approach. After years of consideration, the Federal Reserve codified a new approach to monetary policy last year with a promise to seek a "broad based and inclusive" realization of maximum employment: to keep credit cheap and accessible long enough to produce a strong labor market that could narrow social disparities and boost productivity.

This easier approach to monetary policy was accompanied by the fiscal stimulus enacted in 2017 — the large tax cuts signed into law by the last administration — and done during an expansion, in defiance of traditions of fiscal conservatism feted by leaders in both parties.

The new framework won. Just before the pandemic, there was steady, noninflationary growth, stronger wage growth for lower-wage workers and the narrowest gap between Black and white unemployment rates on record.

And now early evidence shows that the new, more generous economic framework — now being applied by the Biden administration in its own way — is being proved right again.

Wealth is up, and the difference between the top 1 percent and bottom 50 percent is narrower than during the last crisis. 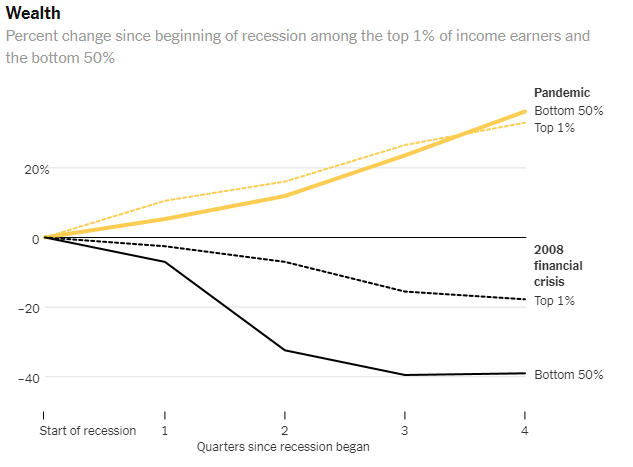 This will be the first recession where consumers across the earnings and wealth spectrum are emerging with a stronger financial position than they started with. Growth is booming and consumer confidence in June reached its highest level since February 2020.

Consumer confidence is up. 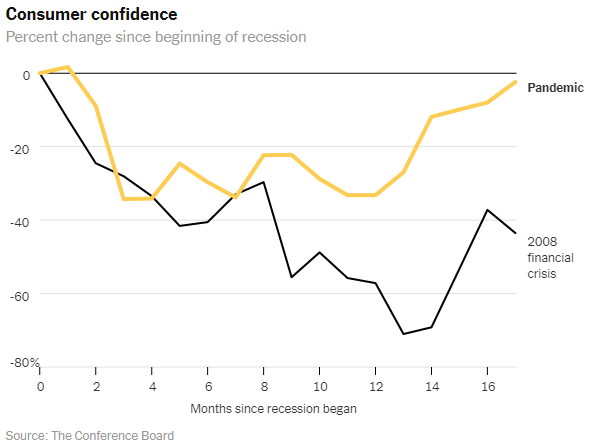 Households have used the various sources of cash support — like stimulus payments and unemployment benefits — to feed their families or shore up their savings and hold on to their homes and cars, even as millions of jobs were lost. The Census Bureau reported a greater than 30 percent drop in the number of Americans going hungry last year, a sharp departure from the rise in hunger and poverty that usually accompanies a recession.

Fewer people are delinquent on their loans. 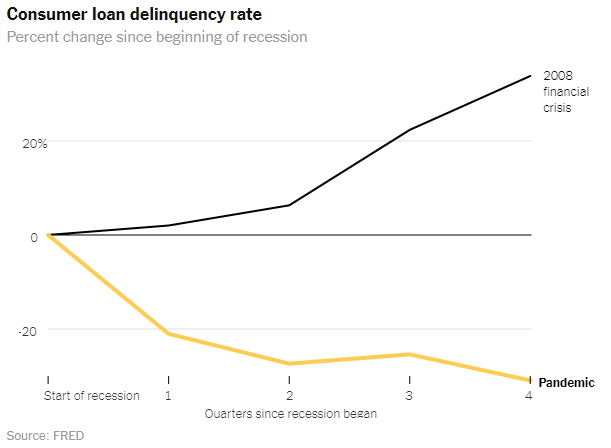 Delinquencies on a range of consumer loans like mortgages, auto loans and student loans fell from already low levels last year, reflecting both cash support and policy efforts that provided temporary forbearance on some loan payments during the pandemic.

Mortgage foreclosures and personal bankruptcies are at record lows. Consumers are spending money but are not taking on a lot of new debt and are holding on to a lot of savings.

People are looking for work, but many are holding out for something better. 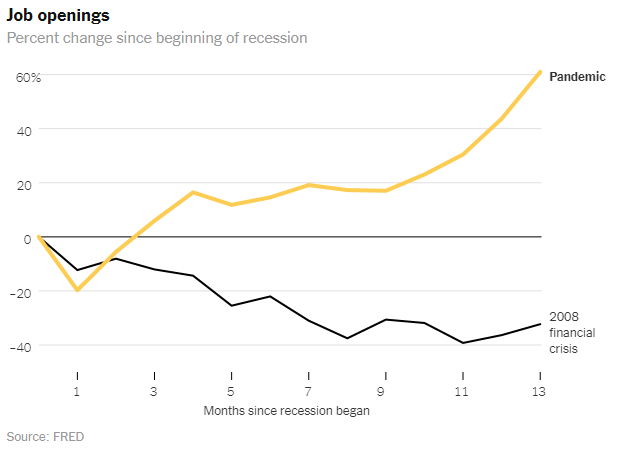 Businesses have been complaining of worker shortages, but millions of people are actively looking for work. A recent survey by the job placement platform Indeed showed that workers are searching for jobs but not urgently — a reflection of health concerns, challenges with child care and the fact that some have built up a financial cushion, which gives them leverage to say no to bad, low-wage offers.

Others have greater financial breathing room because of income from a working spouse. Policy support is not discouraging work, but rather giving workers a stronger bargaining hand. That may be disruptive to business models that have become reliant on abundant cheap labor, but those that adapt are likely to be more productive.

The Black-white unemployment gap is narrowing. 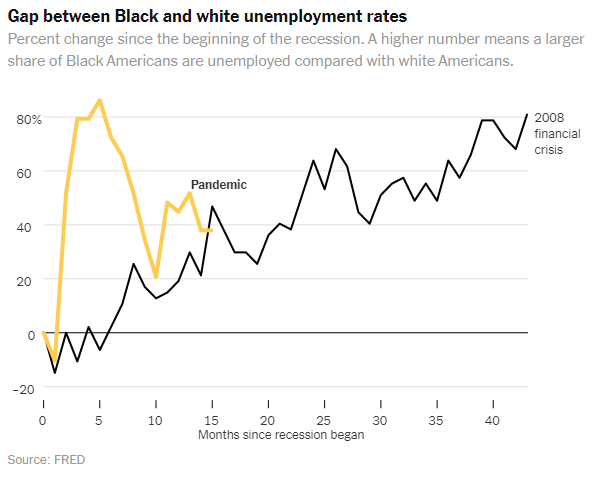 Workers in leisure and hospitality industries, who suffered most from pandemic job losses, are seeing the biggest wage raises, and the gap between Black and white unemployment rates has narrowed at a fast pace.

Still, policy support was far from comprehensive. Too many workers still fell through the cracks. As a recent Bloomberg article documented, millions have had difficulties in claiming unemployment benefits, and the efficiency (and generosity) of benefits varied widely across states. The most recent reading from the census showed an uptick in hunger. The distribution of income and wealth in the U.S. economy is still wildly unequal. Positive news on some fronts doesn't mean mission accomplished.

Inflation is up, but looks moderate in the long term. 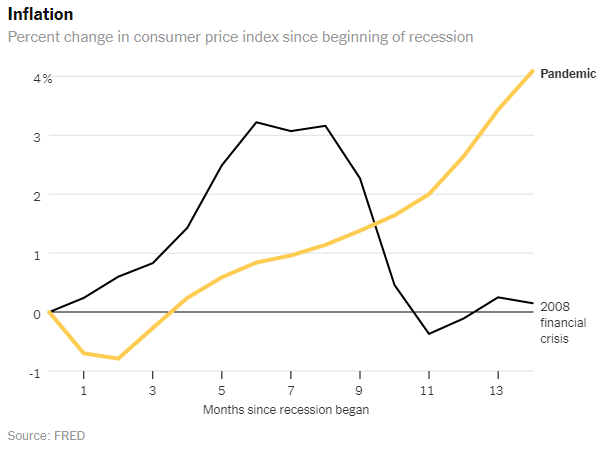 Most price spikes that consumers are experiencing this year are clearly tied to either supply chain disruptions or readjustments made during the reopening. Those account for the bulk of the spike in inflation to date.

The more conventional policy advisers worrying, very vocally on TV, about inflation may be right that we will see more persistent inflationary pressures, but markets broadly are voting with the Fed's assessment that the heat of this moment will prove largely transitory. Interest rates are still low, with little indication the creditworthiness of the United States is in question.

We may very well see a somewhat higher run rate on wage growth and inflation in coming years, and the Fed may have to raise interest rates at some point to keep it in check, but that would most likely be because we reached full employment faster than in recent business cycles, an indicator of success.

While the pandemic policy response was imperfect, having a bolder Congress and a more generous Fed is paying off. The economic scarring typically associated with job loss during a recession has been reduced. And now we can emerge with healthier and broader consumer activity, the key to fueling our economy.

Among all of the dread and cynicism vying for our attention, this summer's good news shows we truly can learn from our mistakes and make policy that improves people's lives.