WASHINGTON (Feb. 17, 2021) – Today, President Biden and U.S. Environmental Protection Agency Administrator Michael S. Regan will announce that as a direct result of the Bipartisan Infrastructure Law, EPA will make significant progress in the clean-up and restoration of the Great Lakes' most environmentally degraded sites, securing clean water and a better environment for millions of Americans in the Great Lakes region. The agency will use the bulk of the $1 billion investment in the Great Lakes from the Bipartisan Infrastructure Law to clean up and restore severely degraded sites, known as "Areas of Concern" or AOCs. This will allow for a major acceleration of progress that will deliver significant environmental, economic, health, and recreational benefits for communities throughout the Great Lakes region.

"The Great Lakes are a vital economic engine and an irreplaceable environmental wonder, supplying drinking water for more than 40 million people, supporting more than 1.3 million jobs, and sustaining life for thousands of species. Through the investments from President Biden's Bipartisan Infrastructure Law, we will make unprecedented progress in our efforts to restore and protect the waters and the communities of the Great Lakes basin," said EPA Administrator Michael S. Regan. "Building a better America means investing in our natural resources and the communities they support."

White House Senior Advisor and Infrastructure Implementation Coordinator Mitch Landrieu said, "With this investment, President Biden is delivering major environmental, public health, and economic wins for the Great Lakes region. Building a better America requires us to confront legacy pollution and clean up the environment – ensuring our kids drink clean water and creating good-paying jobs in the process. We know that cleaning up these waterways and improving the health of the Great Lakes will also create great economic opportunities for communities across the eight-state region and beyond." 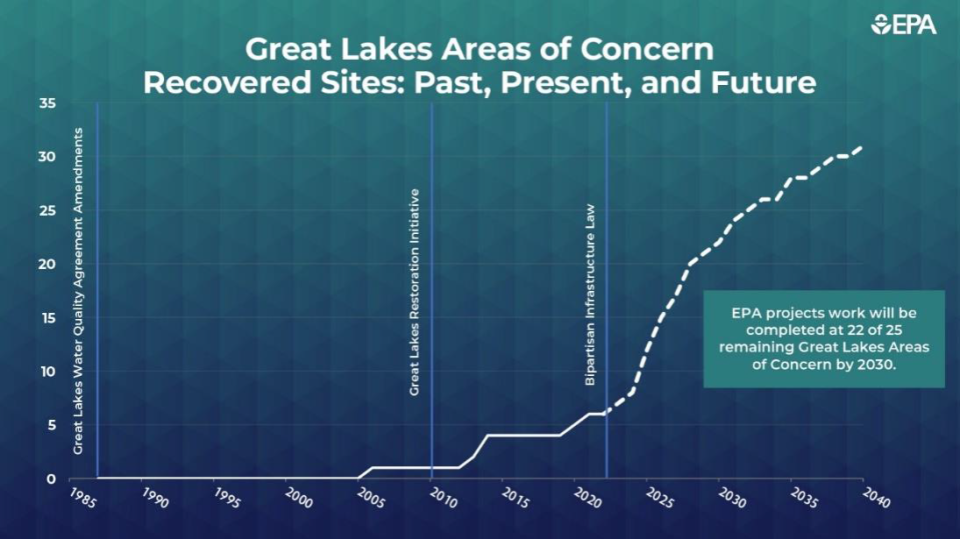 In 2018, an independent economic study from the Great Lakes Commission and the University of Michigan found that every Great Lakes Restoration Initiative dollar spent produces an additional $3.35 of economic activity. For older industrial cities, including AOCs such as Buffalo and Detroit, the study found that there may be more than $4 in additional economic activity for each federal dollar spent. A 2020 analysis of the Great Lakes determined that the region supports more than 1.3 million jobs, generating $82 billion in wages annually.

EPA will award this funding in accordance with the Biden Administration's Justice40 Initiative, which promises to deliver at least 40 percent of the overall benefits from key federal investments to underserved communities. The effort also supports President Biden's America the Beautiful initiative, which includes commitments to honor the nation's conservation traditions, private property rights, the sovereignty of Tribal Nations, and the values and priorities of local communities.

In addition to support from the Bipartisan Infrastructure Law directed toward cleaning up the AOCs, EPA will continue the agency's work to address other key issues such as addressing harmful algal blooms, nutrient reduction activities, protecting against invasive species, and monitoring the health of the Great Lakes. EPA anticipates additional resources could be available for these and other priorities because of the infusion of resources from the Bipartisan Infrastructure Law.

In 1987, the Great Lakes Water Quality Agreement designated 43 sites in the United States and Canada with significant environmental degradation as AOCs in need of restoration. Thirty-one of these sites were in the United States. For more than two decades, plans were drafted to address the contamination but, in the absence of significant funding to undertake the work, there was little progress. In 2010, the Great Lakes Restoration Initiative was implemented and generated the largest ever federal investment in the Great Lakes. Over the last 16 years, EPA has been able to delist six AOCs and complete the necessary management actions at eleven additional AOCs.

The Bipartisan Infrastructure Law is a once-in-a-generation investment that will create millions of jobs modernizing our infrastructure, turn the climate crisis into an opportunity, and put us on a path to win the economic competition for the 21st century.

To see the full list of Areas of Concerns and anticipated work completion and delisting dates please visit: https://www.epa.gov/great-lakes-aocs/list-great-lakes-aocs