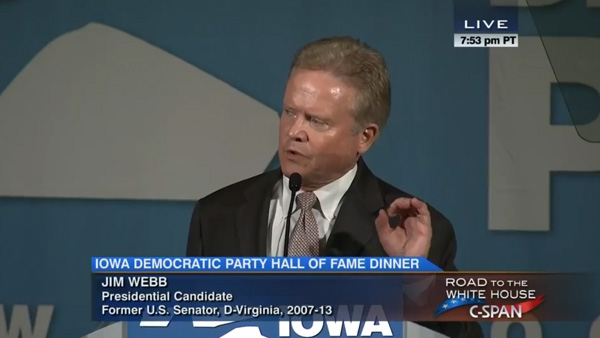 Jim Webb's career is defined by a lifetime of public service.

He started out serving his country as Marine in Vietnam, where he was awarded the Navy Cross, the Silver Star Medal, two Bronze Star Medals, and two Purple Hearts.

He then served as Assistant Secretary of Defense for Reserve Affairs, before becoming Secretary of the Navy in 1987. In the process, he became the first Naval Academy graduate to serve as the civilian head of the Navy.

In 2006, he was elected to the United States Senate, where he set out to pass the Post 9/11 GI bill. Sen. Webb wrote, inducted and guided passage of the most significant veterans legislation since World War II.

Sen. Webb has always stood up for those in need, and we are so honored to have his passion in the Democratic Party.