Press Release - Graham: "As President of the United States, I Would Shape World Events Rather Than Being Overwhelmed by Them"

Senator Graham is the first 2016 presidential candidate to outline a comprehensive approach to national security. 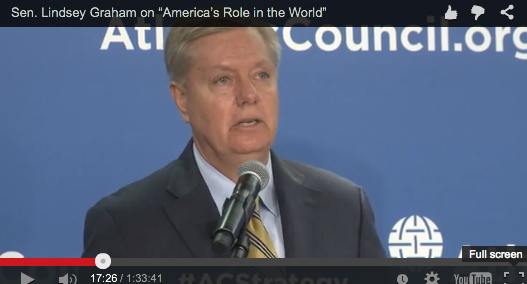 On The Failed Policies Of President Obama And Hillary Clinton: "President Obama's Foreign Policy Has Been A Disaster, And Former Secretary Of State Clinton Was One Of The Chief Architects"

"As recently as Monday of this week, President Obama claimed that our strategy against ISIL is working and that we're more prepared to deal with major attacks against the homeland. In my view, the president constantly oversells our successes and minimizes the threats to our nation. There is no coherent strategy to degrade and destroy ISIL, and there are more radical Islamic groups with the capability and capacity and desire to strike our homeland than at any time since 9-11. Our defenses are being overwhelmed by the number of threats. And as the threats grow we continue to cut our budget and embrace strategies that are designed not to destroy ISIL but to pass this problem along to the next president. Simply put, President Obama's foreign policy has been a disaster, and former Secretary of State Hillary Clinton was one of its chief architects."

On His National Security Approach: "Superior Capability, Overwhelming Capacity And, Most important Of All, Determined Will"

"When it comes to foreign policy, Lindsey Graham offers a very clear and different path. The path that I embrace is going to be tough. But the outcome would ensure a safe America. The Obama-Clinton path has been one from leading from behind, hoping that threats would go away, claiming to have strategies to defeat and degrade ISIL that actually have no chance of working.

On A Strategy To Degrade And Destroy ISIL: "We Would Decapitate Their Leadership"

"The strategy articulated by President Obama to degrade and destroy ISIL doesn't have a snowball's chance in hell of working. You have to look at Iraq and Syria as a single battle space... You will never bring stability to Iraq, unless you deal with the Syrian safe havens. The capital of the caliphate is in Syria, not Iraq. I believe that you must have strategy with a ground component beyond the Kurds to actually destroy the caliphate inside Syria.

"We have 3,500 American forces within Iraq. Too few to do what we need to do. If I were President of the United States I would follow Jack Keane's advice and increase ground forces on the U.S. side inside of Iraq. We would go to approximately 10,000... There would be a Special Forces component. That Special Forces component would hunt the leadership of ISIL morning, noon, and night. Not just a single raid, but multiple raids. We would decapitate their leadership."

"I want a deal, but I want a good deal. A bad deal would create a nuclear arms race in the Mid-East. What is a bad deal? A deal in the eyes of the Sunni Arabs that gives the Iranians too much capability, so they could no longer sit on the sidelines as Sunni Arabs and not get into the nuclear arena themselves.

On Winning The War On Terror: "It's A Roaring Hot Fire Today, Radical Islam, My Goal Is To Make It An Ember"

"What is winning in the war on terror? Winning to me is when radical Islam can be contained by the armies and police forces within the region where it arose. That they have the capability to keep it at bay to protect themselves and us.

"It's a roaring hot fire today, radical Islam, my goal is to make it an ember... That's going to take, ladies and gentlemen, a generational commitment. A small schoolhouse in a remote region in Afghanistan...educating a young girl would do more damage to the Taliban than any bomb we could drop on their head."

"As to the nuclear ambitions of the Iranians. If you want a peaceful nuclear power program, and I'm president, you can have it... If you want an enrichment program large in nature that will lead one day to a nuclear breakout, like North Korea, you will not have it. If you want a war, you will lose it."

"Assad wouldn't last two minutes without Iranian support. If Syria continues the way it's going in the next year, I fear that Lebanon and Jordan will collapse...What happens if we continue on the same track? What are the consequences to the region, if Assad is still in power in January 2017?

"There are more Syrian children in Lebanese schools at the primary level, than there are Lebanese children. The King of Jordan is being overwhelmed by Syrian refugees. At the end of the day, if Syria is not addressed, it's going to take Lebanon and Jordan down with it."

On Embracing Dictatorships: "And As We Confront Dictators, The Worst Possible Thing You Can Do Is Draw A Red Line, They Cross It And Nothing Happens"

"President Obama, I think, has blinked in the face of many challenges. The Arab Spring is still alive and well. The Arab Spring is a desire by women, young people and the disenfranchised to live a better life...So to anybody who wants to be President of the United States and embraces bringing back dictators, I think you've made two fundamental mistakes. One, you don't realize who we are as a nation. And number two, you don't understand what's going on in the world, especially in the Middle East...Young people, women and the disenfranchised will not live in dictatorships for our convenience any longer...

"And as we confront dictators, the worst possible thing you can do is draw a red line, they cross it and nothing happens."

"Number one. President of the United States' primary job, I think, is to be Commander-in-Chief. It's the most important job any president has to perform and we spend precious little time talking about it...We move from one outrageous topic to the other and it's pretty hard to focus on national security at a time when we should, so thank God that there's a place like the Atlantic Council."

On Being President Of The United States: "I Would Shape World Events Rather Than Being Overwhelmed By Them"

Lindsey Graham, Press Release - Graham: "As President of the United States, I Would Shape World Events Rather Than Being Overwhelmed by Them" Online by Gerhard Peters and John T. Woolley, The American Presidency Project https://www.presidency.ucsb.edu/node/312263