Press Release - First to Weight In: Graham: "[The Deal Is] Akin to Declaring War on Israel and the Sunni Arabs"

Senator Lindsey Graham is at the forefront of the fight to stop the Obama Administration's bad nuclear deal with Iran. In case you missed it, take a look at some of the coverage that his reaction to the deal made: 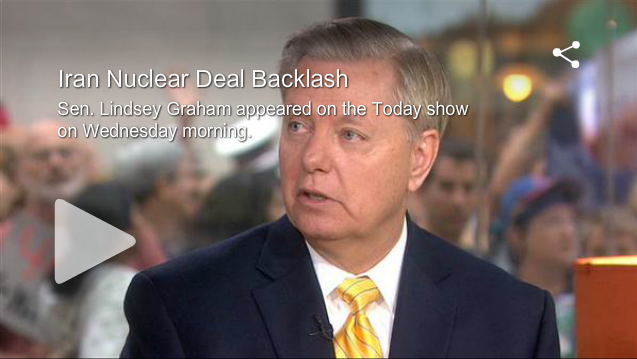 Graham on CNN's Out Front with Erin Burnett: "This Is A Lousy Deal Negotiated By An Incompetent Commander-in-Chief And The Next President Is Going To Have A Mess On Their Hands."

"My preferred alternative would be to not give the Ayatollah 100 billion dollars in sanction relief, unless he agreed to stop destabilizing the Mid-East... not to lift the UN weapons embargo that was not even a part of the original negotiation, so that five years from now he can buy more weapons to destabilize the Mid-East, share it with terrorist organizations who could come here... to have dismantled the nuclear program like we all wanted, rather than leaving in place an industrial sized nuclear program that after the passage of time, can be as large as the Ayatollah would like...not to require the Sunni Arabs to get a nuclear weapon counter what now is a certainty in their mind that the Ayatollah will have a nuke... not to give Israel's chief antagonist, the people who chant death to America, death to Israel the ability to overtime, destroy the Jewish state." 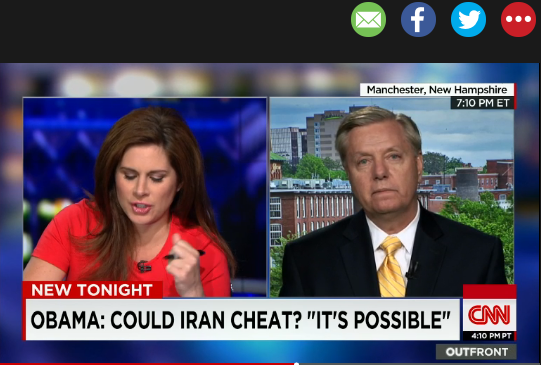 "Sen. Lindsey Graham (R., S.C.) held nothing back when asked to share his thoughts of the Iran nuclear deal agreed to on Tuesday by the Obama administration as part of the p5+1 negotiations in Vienna... Graham delivered a blistering critique of the White House's approach. He asserted the Sunni Arab nations would be unnerved by this deal because it would empower hostile Iran with more resources and, eventually, a nuclear weapon of their own...Rather than ignore Iran's visceral irresponsible rhetoric and destabilizing actions, the senator advocated for a different approach, one that would tie the incremental removal of sanctions with a change in their behavior."

Washington Examiner: "Sen. Lindsey Graham Blasted The Iran Nuclear Deal Reached Early Tuesday Morning." "The 2016 Republican presidential candidate said the deal contradicts everything the U.S. originally aimed for and is guaranteed to ensure a nuclear arms race in the Middle East. 'This is the most dangerous, irresponsible step I have ever seen in the history of watching the Mideast. Barack Obama, John Kerry have been dangerously naive about the Mideast in general,' Graham said on MSNBC's 'Morning Joe.'" (Emilie Padgett, "Graham rips nuclear deal," Washington Examiner, 07/14/15)

Business Insider: "Graham Came Out On Tuesday In Strong Opposition Of World Powers' Agreement With Iran On Its Nuclear Program"

"GOP presidential candidate and US Sen. Lindsey Graham (R-South Carolina) came out on Tuesday in strong opposition of world powers' agreement with Iran on its nuclear program, saying it could amount to a 'death sentence' for Israel...Graham is one of the most hawkish foreign-policy voices in Congress and among the Republican presidential, and he has long been opposed to the emerging deal. He has made his foreign-policy experience a key point of his campaign platform. Graham was particularly vehement in opposition to the reported lifting of the United Nations arms embargo." (Brett Logiurato, "GOP presidential candidate: The Iran deal could be a 'death sentence' to Israel," Business Insider, 07/14/15)

"U.S. Senator and 2016 Republican presidential candidate Lindsey Graham called the Iranian arms deal a 'disaster' and sharply criticized President Obama's policy in the Middle East... If what they are telling me is remotely true, this is a disaster,' he said. 'If it is true we are lifting an arms embargo without a change in behavior you have set in motion re-arming the most radical regime in the Middle East. From our point of view, I can't think of a worse outcome than to get the Ayatollah a guaranteed nuclear program. From the Sunni Arabs' point of view, it's a declaration of war. And it could be a death sentence for Israel.'" (Chris Villani, "Lindsey Graham: Iran nuclear deal a 'disaster,'"Boston Herald Radio, 07/14/15)

The Week: Graham's First Objection Is That Iran Likes The Deal: "[Graham] Went On To Argue That The Deal Ensures That Iran Will Become A Nuclear Nation"

"When the Iranians say this is a win-win, it's probably not." "He went on to argue that the deal ensures that Iran will become a nuclear nation and complain that it will unfreeze $18 billion of Iran's money without demanding that Iran stop meddling in the region, plus gradually lifts an arms embargo 'on the most radical regime in the region...'" (Peter Weber, "Lindsey Graham tells Seth Meyers why the Iran nuclear deal is bad: Tehran is pleased," The Week, 07/15/15)

Yahoo! News: "...[Graham] Would Break The Iran Nuclear Deal On His First Day In The White House."

"Republican presidential candidate Lindsey Graham told Yahoo News in an interview on Wednesday that he would break the Iran nuclear deal on his first day in the White House...Graham, a Republican senator from South Carolina, is a frequent and fierce critic of President Obama's foreign policy. In the interview, which was broadcast on Sirius XM's Channel 124, he said he would reach out to America's partners in the talks, to Israel, and to Iran to say that he was ending the agreement announced this week." (Olivier Knox, "Lindsey Graham on breaking the Iran deal, snubbing Cuba, and being a bachelor president," Yahoo! News, 07/15/15)

"The multilateral deal announced on Tuesday to restrict Iranian nuclear activity in exchange for the phased removal of crippling sanctions has paved the way for a "Sunni-Shiite war from hell," Sen. Lindsey Graham, a South Carolina Republican running for president, told Mic... Graham also had a message for the youth of Iran — those secular, post-revolutionary students and young professionals inclined to celebrate this apparent thaw in relations. 'To the young person in Iran, their initial reaction may be, 'Boy, sanctions are going be relieved and I'm going to have a better life,' Graham said, but 'I think what [the administration has] done to young people in Iran is empowered their oppressor. The chance of change coming to Iran is now a lot less.'" (Gregory Krieg, "Lindsey Graham Slams Iran Nuclear Deal, Saying It 'Empowers the Oppressors,'" Policy.Mic, 07/15/15)

"Graham's presidential candidacy is most impelled by, and most identified with, his concern about radical Islam and his conviction that defeating this threat will require more time, and far more U.S. troops, than President Obama has acknowledged." (Ruth Marcus, "Lindsey Graham calls it like he sees it," The Washington Post, 07/14/15)

Bloomberg: Graham: "If [Hillary] Believes It's A Good Idea To Lift The Arms Embargo Without First Seeing A Behavior Chance By The Iranians, Then Her Judgment As Commander In Chief Will Be Very Much In Question."

"The newly announced deal between Iran and six world powers is "akin to declaring war on Israel and the Sunni Arabs," and will be a huge problem for Hillary Clinton, according to GOP presidential candidate and Senator Lindsey Graham, who promised to not uphold the deal if he is elected next year...Hillary Clinton's reaction to this deal is the first real test of her ability to be president and her judgment," said Graham. "If she believes it's a good idea to lift the arms embargo without first seeing a behavior change by the Iranians, then her judgment as commander in chief will be very much in question." (Josh Rogin, "Graham: Iran Deal 'Akin to Declaring War' on Israel," Bloomberg, 07/14/15)

Lindsey Graham, Press Release - First to Weight In: Graham: "[The Deal Is] Akin to Declaring War on Israel and the Sunni Arabs" Online by Gerhard Peters and John T. Woolley, The American Presidency Project https://www.presidency.ucsb.edu/node/312025