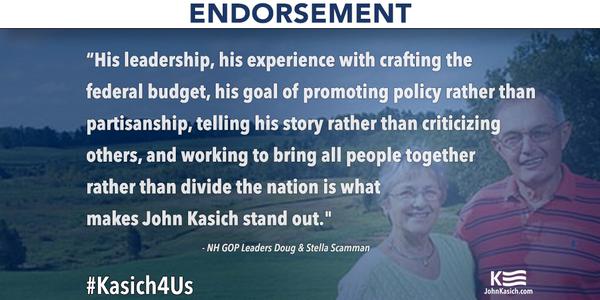 Today lifelong New Hampshire public servants and Republican activists Doug and Stella Scamman announced their endorsement of Ohio Governor John Kasich for President, saying the governor "stands out as the best among many very good candidates for President and will provide the leadership we need in Washington." The Scammans will serve as New Hampshire State Co-chairs of Kasich's campaign.

"In Congress, as Chair of the Budget Committee, John Kasich led the way in passing a balanced budget, showing he can work with all factions of Washington to accomplish great feats. He knows foreign policy from serving years in Congress. As Governor of Ohio, John Kasich turned an $8 billion budget deficit into a $2 billion dollar surplus while making state government more efficient and delivering better services. When a state like Ohio re-elects their Governor with 64 percent of its vote, one knows that Governor Kasich has done what he is telling us," said the Scammans. "His leadership, his experience with crafting the federal budget, his goal of promoting policy rather than partisanship, telling his story rather than criticizing others, and working to bring all people together rather than divide the nation is what makes John Kasich stand out. Governor Kasich's positive approach is what we need in Washington."

Doug Scamman served 13 terms as a New Hampshire state representative and was elected Speaker of the House three times. Stella Scamman served three terms in the New Hampshire House, was a member of the University System of New Hampshire Board of Trustees for 12 years, and is active with the Seacoast Republican Women. In 2014, the Scammans received the Granite State Award from the University of New Hampshire in recognition of their outstanding contributions to New Hampshire. The Scammans have hosted countless local and national Republican candidates over the years at their Bittersweet Farm in Stratham, including Mitt Romney's announcement for President rally in 2011.

"The Scammans are legends in New Hampshire politics and I appreciate their support very much. They will be an important part of our campaign's efforts in the state and critical to our success. I'm very excited about what we're going to be able to do together," said Kasich.