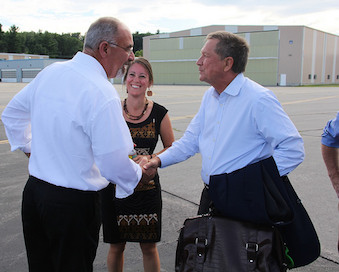 "The last time the federal government had a balanced budget was when John Kasich made it happen. He hasn't been in Washington since and it hasn't happened since. We need his leadership in the White House because Washington won't work for us until we get a leader who puts good policy before partisanship. He's put conservative ideas to work in Ohio to get the economy going again and he's been able to work with people with other views to produce good results. America needs John Kasich's kind of experience and leadership," said Flanagan.

Flanagan is the New Hampshire House of Representatives Majority Leader and is serving his third term in the House. He previously served as selectman in the Town of Brookline, vice chair of the Hollis Brookline Cooperative School District and chair of the Brookline School Board. He is a retired small business person.

"I'm grateful to Jack for his support and for joining our effort to get America back on track fiscally, as well as to make it a safer, more unified place. Jack's been a strong, sensible leader in New Hampshire and I value that kind of person on our team. He brings a deep knowledge of New Hampshire politics and an appreciation for the kinds of ideas that will get America going again. I'm glad he's going to work as part of our team to help America rise again," said Kasich.