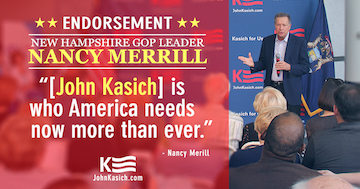 "John Kasich, quite simply, has done it. He's led on national security—which is so important in today's chaotic world, he's led on the economy in a large and complex state, he's wrestled the federal budget to the ground and he's a uniter not a divider, which is saying something in a state as diverse as Ohio," said Merrill. "He's who America needs now more than ever."

Merrill is a long-time New Hampshire Republican leader whose endorsement brings significant weight among the state's GOP activists. She is a former Republican National Committee member from New Hampshire and co-chaired U.S. Senator John McCain's campaigns in New Hampshire in 2000 and 2008.

"Nancy's support means a lot to me personally, but more important it is going to make a difference. The momentum accelerates when key people like her bring their organization and support to our effort and I'm very grateful," said Kasich. "The response in New Hampshire has been amazing. I'm grateful to all of those who have been willing to listen to what I have to say, to check me out and come out and say hello. It's definitely happening and I'm confident we're going to that progress build and build."