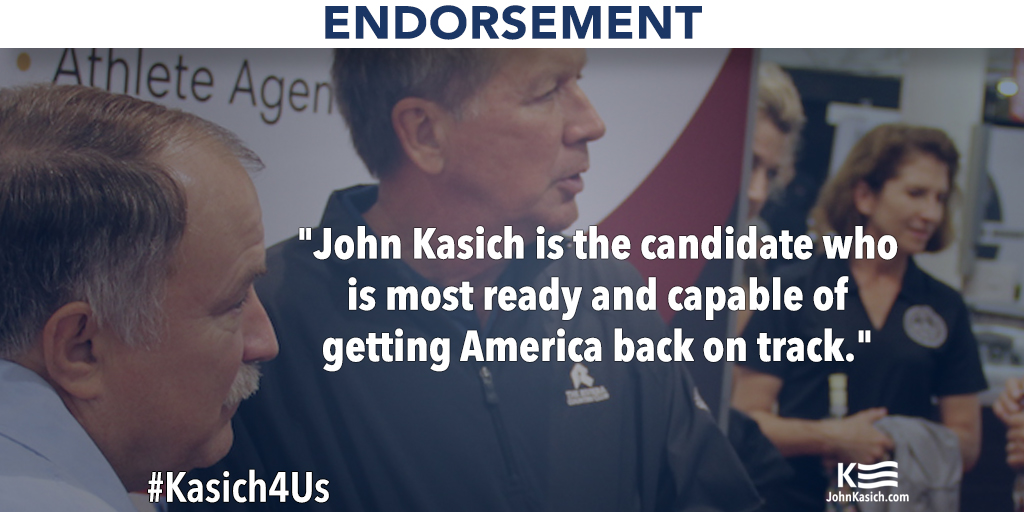 Today, the former Speaker of the Iowa House of Representatives and 18-year legislative veteran Brent Siegrist endorsed Ohio Governor John Kasich for President. Siegrist will serve as an advisor to the governor's campaign effort in Iowa and as part of his leadership team.

"As the governor of a very important state, Gov. Kasich understands how to effectively run large operations," said Speaker Siegrist, "And that experience is, in part, what makes him the right person to lead our nation as President. Under his watch, Ohio has been remarkably transformed, as he has turned budget deficits into surpluses, cut taxes more than any sitting governor, reduced the size of state government, and presided over an economy that put more than 350,000 Ohioans back to work. Combined with his 18 years in Congress where he led the effort to balance the federal budget and his decade in the private sector working with job creators across the country, John Kasich is the candidate who is most ready and capable of getting America back on track, and making certain that as our nation does better, every American will benefit."

A former high school teacher, Speaker Siegrist was first elected from Council Bluffs to the Iowa House of Representatives in 1984 and served for 18 years, including seven years as Republican Majority Leader and three years as Speaker.

Said Gov. Kasich, "I am, of course, humbled and thrilled to have the support of an Iowa Republican heavyweight like Speaker Siegrist. We are excited to have him join our team, and he will be a great asset for us both in Iowa and nationally as we continue to make progress in getting our message out to people across the country."