Press Release - On CNN's State of the Union, Graham Says He'd "Allow A New President To Close Out The [Iran Nuclear Deal]"

Alexandria, VA - Senator Lindsey Graham appeared on CNN's State of the Union this morning from Manchester, New Hampshire where he discussed the latest on the Iran nuclear negotiations and his 2016 presidential run.

Senator Graham's interview with Dana Bash comes during a campaign trip to New Hampshire where he spent the weekend discussing how to keep our nation secure with the threats we face both at home and abroad. Graham stated on Sunday, "I think the best thing for the world and our country is to let a new president have a chance to conclude the deal with Iran, because Obama's so weak in the eyes of the Iranians and our friends at large."

Watch the clip on Iran here: 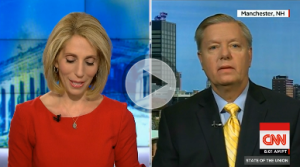 On The Iran Nuclear Negotiations: "To The Iranians: If You Try To Breakout And Get A Nuclear Weapon, We're Going To Stop You."

On The Obama Administration's Handling Of The Negotiations: "...Everybody Running For President, Except Rand Paul, Could Negotiate A Better Deal...Give The Next President A Chance..."

"I think a good outcome is to basically leave the interim deal in place. I think everybody running for president, except Rand Paul, could negotiate a better deal than the Obama Administration. Because when they drew that red line with Assad and did nothing about it, they're weak in the eyes of the Iranians. They don't believe Obama would use military force. So give the next president a chance to conclude a final agreement with the Iranians. And please understand. Of all the mistakes we could make as a world and as a nation, getting a bad deal with Iran is the worst possible outcome...So let's let somebody new negotiate because Obama's so flawed as a negotiator."