Last week, Senator Graham announced his candidacy for President of the United States. In case you missed it, check out the video of the senator's remarks here and take a look at some of the coverage his announcement week made: 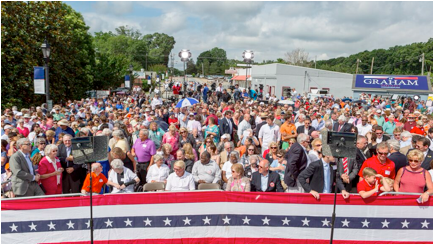 "...as he announced his presidential bid Monday here in the tiny town where he grew up, Lindsey Graham sought to knock down the idea that he's a creature of Washington and instead told a personal story that's largely been overlooked over the course of his two decades in the House and Senate. It's the tale of a son of pool hall owners, who grew up near-impoverished in the back room of his parents' bar. As a college student he raised, and eventually adopted, his little sister after their parents died, before going on to have a career as an Air Force lawyer and then rising to become South Carolina's senior senator." (Katie Glueck, "Lindsey Graham, In Announcing White House Run, Gets Personal," Politico, 06/01/015)

WHAT THEY'RE SAYING ABOUT GRAHAM RUNNING FOR PRESIDENT

Des Moines Register: "[Graham] Is A Refreshingly Honest And Principled Politician" "In contrast, Sen. Lindsey Graham of South Carolina, the fourth member of the Senate to announce his candidacy, is serving his third term in the Senate where he is widely respected for his principles and his foreign policy acumen. His career includes 30 years as a U.S. Air Force lawyer...He is a refreshingly honest and principled politician...Iowa Republicans have a lot of candidates to choose among, but they should not ignore Graham." (Editorial Board, "Editorial: Among Senators Hoping To Be President, Graham Deserves A Look," Des Moines Register, 05/06/15)

"You Might Not Always Agree With Lindsey Graham, But At Least You Know What The Man Thinks."

"Mr. Graham deserves particular credit for sticking to his convictions in Mr. Obama's first term, when the political fashion was to say the U.S. was 'war-weary.' Mr. Obama claimed 'the tide of war is receding' and many Republicans and conservative pundits became anti-interventionists of convenience. Mr. Graham was among those warning that the President's policy of disengagement was storing up danger, and he was right." (Editorial Board, "Graham For The Defense," Wall Street Journal, 06/03/15)

National Journal: "An Unparalleled Depth Of Experience On Foreign Policy"

"Colleagues say he's got an unparalleled depth of experience on foreign policy, especially compared to his competitors in the Senate, who have had less time in the upper chamber to build their foreign policy credentials...Besides former Republican presidential nominee John McCain, there are few in the Republican Party who are as widely recognized for their hawkish foreign policy as Graham." (Lauren Fox, "Lindsey Graham's Presidential Campaign Has a Point," National Journal, 06/01/15)

"'He's a dark horse — keep an eye on him,' McCain told reporters earlier this year. 'In debates, he'll shred 'em. Have you ever seen Sen. Graham in a debate, on the floor of the Senate? He will do wonderful. I don't want to raise expectations, but I'm confident.'" (Ryan Lovelace, "Lindsey Graham Could Be The South Carolina Spoiler," Washington Examiner, 06/02/15)

"Finally, some real retail politics. For 90 days, I've waited for this. For nearly an hour, a credible candidate addressed real issues. He gave specifics. He took lots of questions. He bantered with glee. It's refreshing to see citizens listening with openness...They asked intelligent questions and we got substantive answers." (Morey Stettner, "Lindsey Graham, Lovable Warmonger, Seacoast Online, 06/03/15)

Wall Street Journal: "Whoever Emerges From The GOP Field Will Want To Put Global Disorder Front And Center In 2016, And Mr. Graham Can Explain To The Public How We Got Here." (Editorial Board, "Graham For The Defense," Wall Street Journal, 06/03/15)