"Colonel Graham has faithfully served our nation for 33 years. He built a legendary reputation as Captain Graham," said The Judge Advocate General Christopher Burne, U.S. Air Force in his remarks at the retirement ceremony. "I could go on about Colonel Graham's integrity, service before self and excellence. These are his hallmark traits and they have not changed in 33 years." 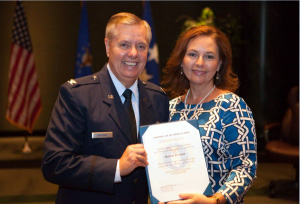 "It's been one of the great honors of my life to serve in the Air Force in some capacity for more than three decades," Senator Graham states in his eBook, "My Story."

To learn more about Senator Graham's time in the service, download a free copy of his eBook here and take a look at some of the photos from the ceremony here.