This week was disastrous for Joe Biden: he repeatedly made racially charged comments to reporters, abandoned his appearance at the Democratic National Convention in Milwaukee, and had his economic message undercut by the fantastic July jobs report. While President Trump provides strong leadership during this time of crisis, Joe Biden's diminished mental state is only becoming more and more apparent. Steve Cortes, Trump 2020 Senior Advisor, and David Harris Jr., Black Voices for Trump Advisory Board Member, discussed all this and more in tonight's 'War Room Weekly' hosted by Tim Murtaugh, Trump 2020 Communications Director. 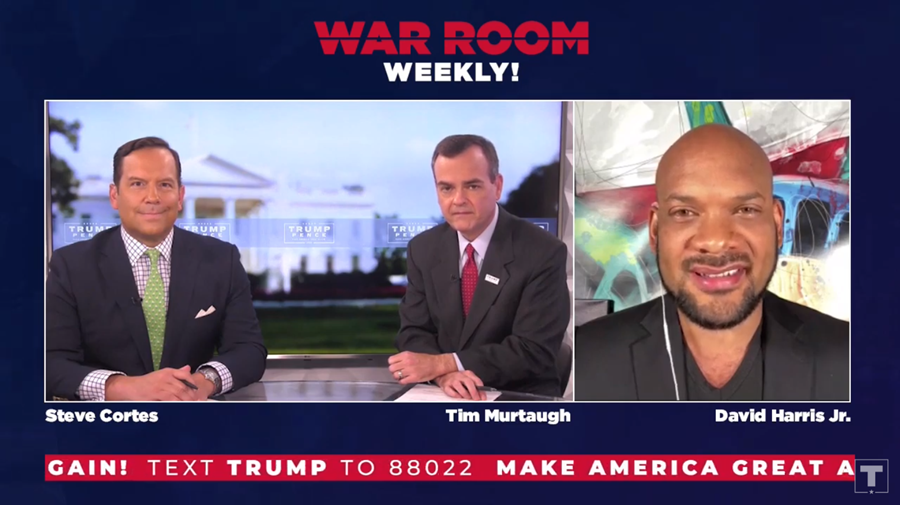 "This week, Joe Biden re-emphasized his utter incapacity to serve as President of the United States, which is made all the more apparent when contrasted with President Trump's strong series of actions to ensure prosperity for the American people," said Tim Murtaugh, Trump 2020 Communications Director. "As Joe Biden hides in his basement, President Trump is demonstrating his incredible capacity to lead the American people during a time of crisis."

"In his diminished mental state, Joe Biden said out loud what many other Democrats silently believe: that they deserve unconditional support from minority voters, even after spending decades shipping jobs overseas and undermining the American family," said Steve Cortes, Trump 2020 Senior Advisor. "I know that in November, the American people will reject Joe Biden's socialist agenda and re-elect President Trump to ensure another four years of greatness."

"By dismissing the idea that Black voters can be independent thinkers, Joe Biden demonstrates his utter disregard and ignorance for the interests of the Black community," said David Harris Jr., Black Voices for Trump Advisory Board Member. "This November, minority voters need to reject the liberal Democrats who think they control our votes and support the only man who can bring prosperity to all Americans: President Trump."