Joe Biden's selection of Kamala Harris as his running mate cemented Biden's lurch to the far left and solidified the 2020 Democrat ticket as the most radical in U.S. history. While Biden and Harris brag about their plan to hike taxes by at least $4 trillion, adopt socialized health care, and embrace dangerous immigration policies tantamount to open borders, President Trump is leading the nation in the Great American Comeback. Mercedes Schlapp, Trump 2020 Senior Advisor for Strategic Communications, and Deneen Borelli, Black Voices for Trump Advisory Board Member discussed all this and more in tonight's 'War Room Weekly' hosted by Tim Murtaugh, Trump 2020 Communications Director. 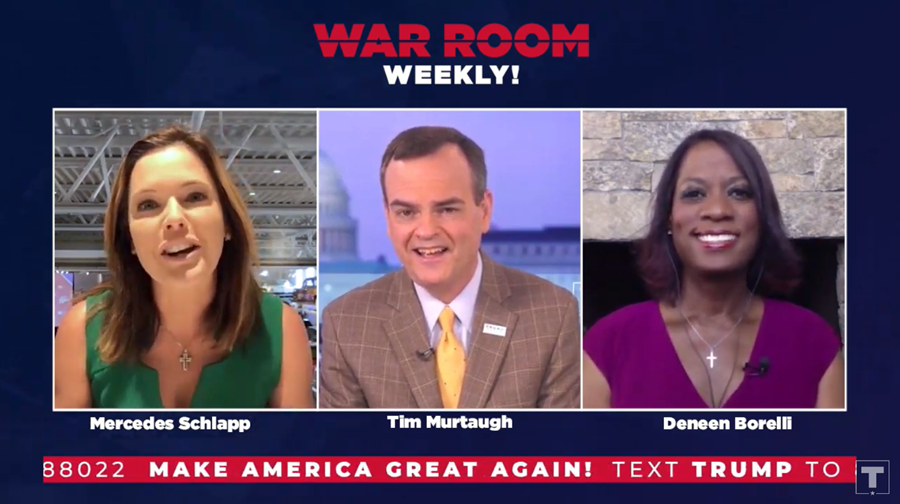 "A Biden-Harris presidency would drag our nation to the extreme left, hiking taxes on 82% of Americans and granting amnesty to 11 million illegal aliens who would compete with our citizens for jobs," said Tim Murtaugh, Trump 2020 Communications Director. "Joe Biden and Kamala Harris have already failed as presidential candidates a combined total of three times and will continue their losing streak in November. The American people will reject a disastrous, radical, leftist takeover of our nation."

"The media is clinging to the narrative that Kamala Harris is a pragmatic moderate instead of sharing the truth: Joe Biden and Kamala Harris are pushing an extremist agenda to dramatically expand government's control over our everyday lives," said Mercedes Schlapp, Trump 2020 Senior Advisor for Strategic Communications. "The American people will reject Biden and Harris' radical plans, and overwhelmingly support President Trump's successful delivery of the Great American Comeback."

"Kamala Harris' was a terrible candidate who did not engage voters during her own presidential bid and will not salvage Joe Biden's current campaign," said Deneen Borelli, Black Voices for Trump Advisory Board. "Harris previously condemned Joe Biden for his association with segregationists, but is now turning a blind eye to his transgressions for her own personal gain. Only President Trump has delivered real opportunity for the Black community, and the American people will remember this as they head to the polls in November."