Last night's vice presidential debate confirmed what the American people already knew: Joe Biden and Kamala Harris comprise the most radical ticket in American history. By exposing Biden and Harris' desire to radically transform America and highlighting all the Trump Administration has accomplished for the American people, Vice President Mike Pence did for us what the mainstream media never has and never will. Erin Perrine, Trump 2020 Director of Press Communications, and Hogan Gidley, Trump 2020 National Press Secretary, analyzed the top five moments from the vice presidential debate on tonight's 'Team Trump Online: Debate Analysis.' 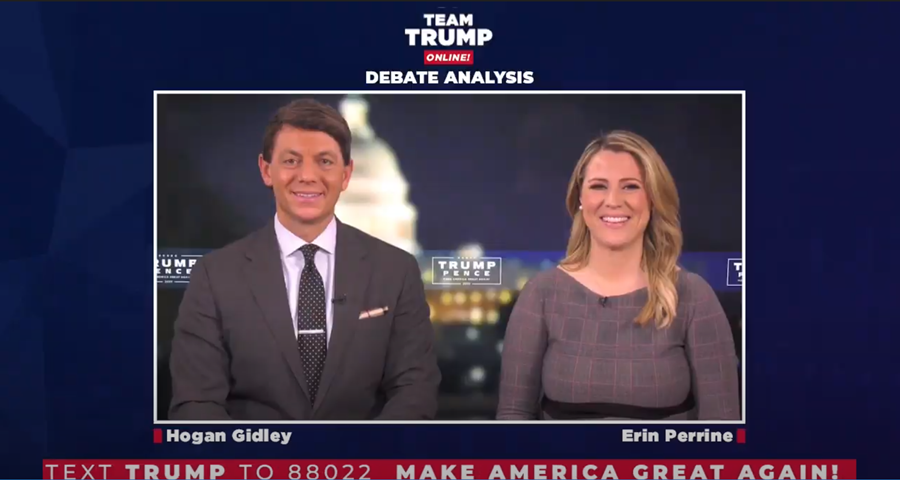 "Kamala Harris' refusal to directly communicate her stance on key issues at the vice presidential debate is further proof that the Democrat party is scheming to fundamentally undermine the legitimacy of our government," said Erin Perrine, Trump 2020 Director of Press Communications. "The American people deserve leaders who will uphold the values our nation was founded on, and they have them in President Trump and Vice President Pence."

"Vice President Pence was masterful last night in pushing back on the multitude of lies spewed by Kamala Harris and by detailing the many ways President Trump has delivered real, positive results for the American people, the Vice President proved why our country needs four more years of Donald Trump," said Hogan Gidley, Trump 2020 National Press Secretary. "This is the most critical election of our lifetime, and re-electing the Trump Administration will secure that our American freedoms and values are upheld by leaders who believe in this country."