Instead of pro-job and pro-growth policies, Biden is turning to an old friend – tax hikes and big government

BIDEN IS CALLING FOR ANOTHER $775 BILLION IN SPENDING

This Morning, The Biden Campaign Released The Third Plank Of His Economic "Recovery" Plan, Which Would Cost $775 Billion Over Ten Years. "Joseph R. Biden Jr. will announce a sweeping new $775 billion investment in caregiving programs on Tuesday, with a series of proposals covering care for small children, older adults and family members with disabilities." (Shane Goldmacher And Claire Cain Miller, "Biden To announce $775 Billion Plan To Help Working Parents And Caregivers," The New York Times, 7/21/20)

IN THE LAST MONTH, BIDEN HAS PROPOSED OVER $3.4 TRILLION IN NEW SPENDING WITH TAX CUTS TO MATCH

On July 14, Biden Released A New Climate "Plan" That Proposes $2 Trillion In New Spending Over Just Four Years. "And, Biden's plan will empower workers to organize unions and bargain collectively with their employers as they rebuild the middle class and a more sustainable future. Biden will make a $2 trillion accelerated investment, with a plan to deploy those resources over his first term, setting us on an irreversible course to meet the ambitious climate progress that science demands." ("The Biden Plan To Build A Modern, Sustainable Infrastructure And an Equitable Clean Energy Future," Biden For President, Accessed 7/21/20)

On July 9, Biden Released His First "Build Back Better" Plan That Would Cost $700 Billion. "Make 'Buy American' Real and Make a $400 billion Procurement Investment that together with the Biden clean energy and infrastructure plan will power new demand for American products, materials, and services and ensure that they are shipped on U.S.-flagged cargo carriers. … 'Make a New $300 Billion Investment in Research and Development (R&D) and Breakthrough Technologies — from electric vehicle technology to lightweight materials to 5G and artificial intelligence — to unleash high-quality job creation in high-value manufacturing and technology." ("The Biden Plan To Ensure The Future Is 'Made In All Of America' By All Of America's Workers," Biden For President, Accessed 7/21/20)

BIDEN HAS NOW PROPOSED NEARLY $6 TRILLION IN NEW GOVERNMENT SPENDING, WITH THE REAL COST MUCH HIGHER 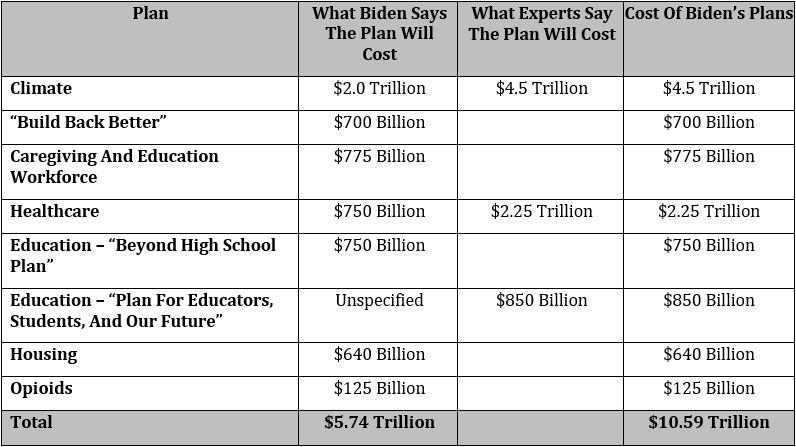 BIDEN IS DRASTICALLY UNDERREPORTING HOW MUCH HIS SPENDING SPREES WOULD COST

An Independent Estimate Of Biden's Healthcare Plan Found It Would Cost $2.25 Trillion, Triple What His Campaign Claimed

According To The Committee For A Responsible Federal Budget, Joe Biden's Healthcare Plan Would Cost $2.25 Trillion, And Potentially Up To $2.5 Trillion. "Vice President Joe Biden's health plan has a gross cost of $2.25 trillion and, incorporating offsets, would add $800 billion to deficits over ten years under our central estimate." (Primary Care: Estimating Democratic Candidates' Health Plans," Committee For A Responsible Federal Budget, 2/26/20) Biden's Campaign Claims His Health Care Plan Would Cost $750 Billion Over The Next Decade. "The plan — which the campaign says will cost $750 billion over a decade, to be paid for by reversing some of the Trump administration's tax cuts — is less transformative than the 'Medicare for All' proposal advanced by Sen. Bernie Sanders (I-Vt.) and supported by some other Democrats, which would effectively do away with private insurance and shift all Americans to government-run health coverage." (Dan Diamond, "Biden unveils health care plan: Affordable Care Act 2.0," Politico, 7/15/19) 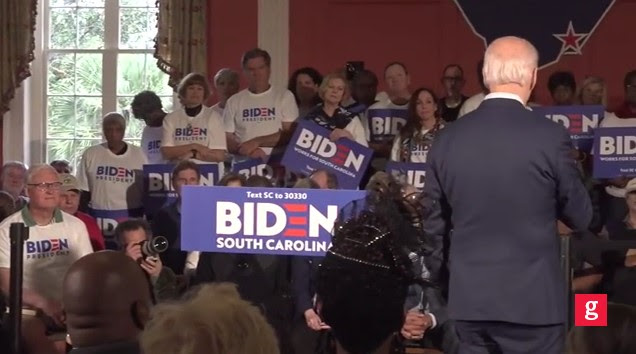 Biden's Plan To Eliminate Oil, Gas, And Coal From The Energy Grid Undercounts the Costs By $2.5 Trillion

Biden's Latest Climate Plan Calls For 100 Percent "Clean Energy" By 2035, Claiming He Will Spend A Staggering $2 Trillion Over Four Years To Make This Happen. "Joe Biden on Tuesday will call for setting a 100% clean-electricity standard by 2035 and investing $2 trillion over four years on clean energy, three people familiar with his plan said Monday." (Jennifer Epstein, Ari Natter, and Jennifer A Dlouhy, "Biden To Call For $2 Trillion In Spending On Clean Energy," Bloomberg, 7/13/20)

A Wood Mackenzie Study Found That 100 Percent De-Carbonization Of The U.S. Power Grid Would Actually Cost $4.5 Trillion. "We estimate the cost of full decarbonization of the US power grid at US$4.5 trillion, given the current state of technology." (Dan Shreve, "Deep Decarbonization: the Multi-Trillion-Dollar Question," Wood Mackenzie, 6/27/19)

TO PAY FOR ALL OF THIS, BIDEN WILL ENACT UNPRECEDENTED TAX HIKES

Even Before His New Plans, Biden Was Proposing An Unprecedented $4 Trillion In Tax Hikes Which Would Raise Taxes On 82 Percent Of Americans

According To The Tax Policy Center, Biden's Plans Call For Hiking Taxes By $4 Trillion Over The Next Decade. "Biden would increase income and payroll taxes on high-income individuals and increase income taxes on corporations. He would increase federal revenues by $4.0 trillion over the next decade. Under his plan, the highest-income households would see substantially larger tax increases than households in other income groups, both in dollar amounts and as share of their incomes." ("An Analysis of Former Vice President Biden's Tax Proposals," Tax Policy Center, 3/5/20)

According To The Tax Foundation, Biden's Tax Plan Would Raise Taxes By $3.8 Trillion Over Ten Years. "Based on the Tax Foundation General Equilibrium Model, we estimate that, on a conventional basis, Biden's plan would increase federal tax revenue by $3.8 trillion between 2021 and 2030 relative to current law." (Huaqun Li, Garrett Watson, and Taylor LaJoie, "Details And Analysis Of Former Vice President Biden's Tax Proposals," Tax Foundation, 4/29/20)

According To Penn Wharton Budget Model, Biden Would Raise Taxes By Up To $3.7 Trillion. "Relative to current law, PWBM projects that the updated Biden tax plan would raise between $3.1 trillion (including macroeconomic effects) and $3.7 trillion (not including macroeconomic effects) over fiscal years 2021-2030 while decreasing GDP by 0.6 percent in 2030 and 0.7 percent in 2050." ("The Updated Biden Tax Plan: Budgetary, Distributional, And Economic Effects," Penn Wharton, 3/10/20)

During Her 2016 Campaign, Hillary Clinton Clinton Proposed $1.4 Trillion In New Taxes. "The analysis shows that the former vice president's tax agenda is well to the left of past Democratic presidential campaigns. The same group, for instance, projected that Hillary Clinton's 2016 tax proposal would have increased taxes by $1.4 trillion over a decade." (Jay Heflin, "Biden Tax Plan Would Raise $4 Trillion, More Than Twice The Hike Proposed By Clinton In 2016," Washington Examiner, 3/5/20)