Campaign Press Release - Nothing To Be Proud Of: The Biden LGBT Record?

From deeming gay Americans "security risks" to voting for DOMA, Biden is far from the champion for LGBT Americans that he claims to be.

BIDEN WAS NOT A CHAMPION FOR LGBT AMERICANS

In 1973, Biden Suggested That Gay Federal Employees Were "Security Risks"

In 1973, Responding To A Question About Gays Serving In The U.S. Civil Service Or The Military, Biden Said That He Has Not Given It Much Thought But His "Gut Reaction...Is That They [Homosexuals] Are Security Risks." "Biden also agreed to answer later by mail a series of questions on U.S. Civil Service and military job discrimination which Robert Vane, a gay activist, presented him. Vane a North Star resident, startled Biden with his sudden queries and sent at least three persons storming from the room when he identified his cause. 'My gut reaction,' Biden told Vane, 'is that they [homosexuals] are security risks but I must admit I havent' given this much thought...I'll be darned!'" (Hugh Cutler, "Gay Activist Gets Biden's 'Gut Reaction,'" The Morning News [Wilmington, DE], 9/25/73) 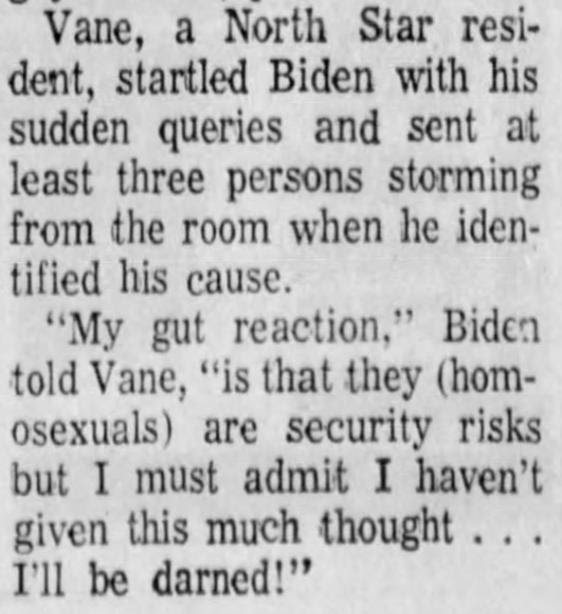 In 1993, Biden Voted To Block The Immigration Of HIV+ Individuals Into The United States

More Than 14,500 Service Members Were Discharged From The Military For Violating The "Don't Ask, Don't Tell" Policy Between 1994 And 2011. "14,500 US service personnel have been thrown out of military service since the DADT policy took effect, according to the non-profit watchdog and lobby group, the Servicemembers Legal Defense Network." (Karen McVeigh and Paul Harris, "US Military Lifts Ban On Openly Gay Troops," The Guardian, 9/20/11)

In 1994, Biden Voted For An Amendment To Cut Off Federal Funding For Schools That Taught "Acceptance Of Homosexuality As A Lifestyle" 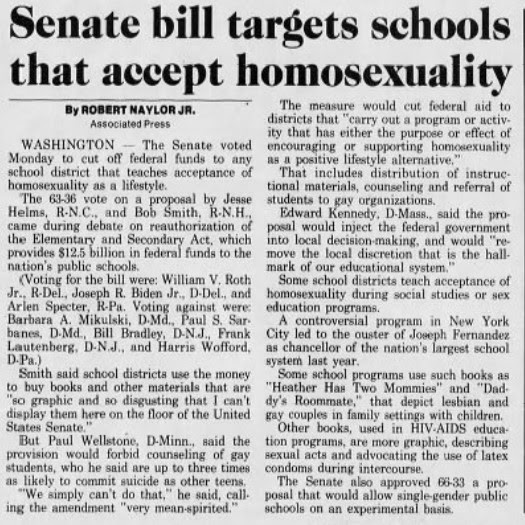 In 1998, Biden's Home State Newspaper Described Him As Being Relatively Silent On Gay Rights 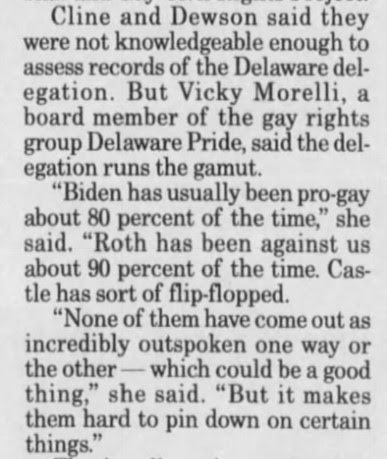 In 1996, Biden Voted For The Defense Of Marriage Act

In 1996, Biden Voted For The Defense Of Marriage Act (DOMA). "Defense of Marriage Act - Amends the Federal judicial code to provide that no State, territory, or possession of the United States or Indian tribe shall be required to give effect to any marriage between persons of the same sex under the laws of any other such jurisdiction or to any right or claim arising from such relationship. Establishes a Federal definition of: (1) 'marriage' as only a legal union between one man and one woman as husband and wife; and (2) 'spouse' as only a person of the opposite sex who is a husband or wife." (H.R. 3396, Roll Call Vote #280, Passed 85-14, 9/10/96)

In The 2000s, During Discussion Of A Constitutional Marriage Amendment, Biden Called Same Sex Marriage A "State Issue," Repeatedly Saying "Marriage Is Between A Man And A Woman"

In February 2004, Biden Said He Opposed President Bush's Proposed Marriage Amendment, But Did So By Describing It As Unnecessary And Touting His Prior Vote For The Defense Of Marriage Act. (Erin Kelly, "Amendment Unnecessary, Delaware Senators Say," The News Journal [Delaware], 2/26/04) 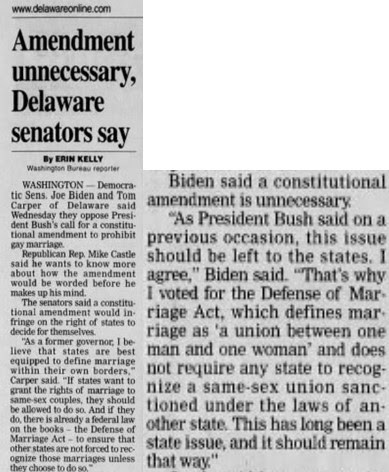 In June 2006, Biden Said He Did Not Oppose A Federal Marriage Constitutional Amendment On Substance, But That He Opposed "The Timing" Of The Amendment. JOHN ROBERTS: "So -- s, are you more against the amendment itself or the timing of it?" SENATOR JOE BIDEN (D-DE): "I'm against the timing of it. Look, marriage is between a man and a woman. Tell me why that has to be put in the Constitution now? We already have a federal law that has not been challenged. No one's declared it unconstitutional. It's the law of the land, saying marriage is between a man and a woman." (CNN's "Anderson Cooper 360," 6/5/06) 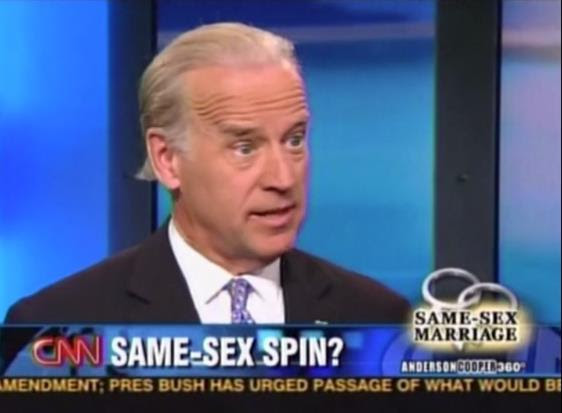 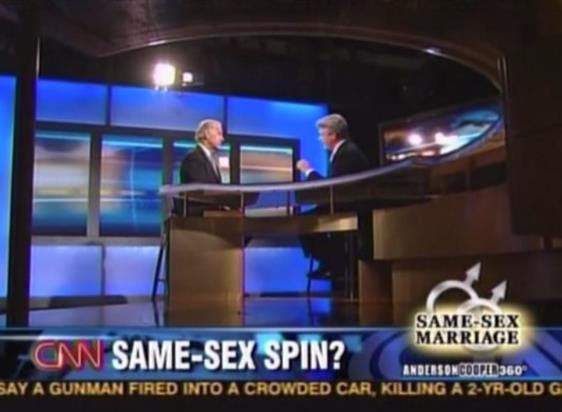 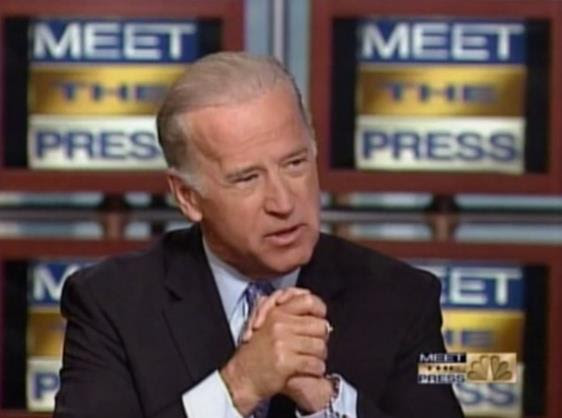 During The 2008 Presidential Campaign, Biden Refused To Back Gay Marriage 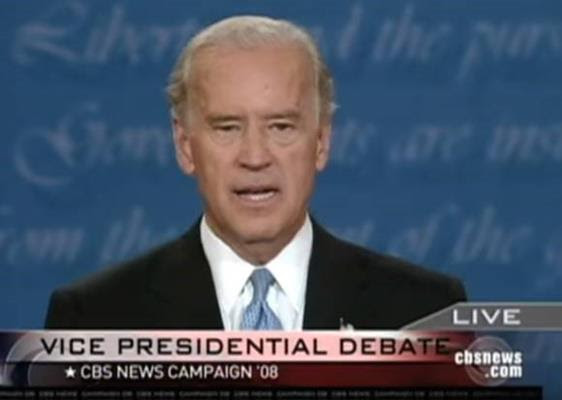 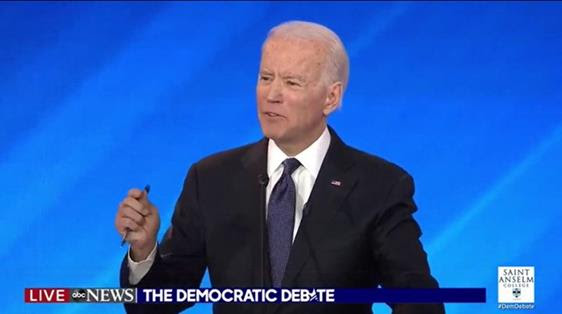 At The March 15 Democrat Debate, Biden Repeated The Claim That He Was The First Person Of Any Administration "To Go On National Television" In Support Of Gay Marriage. JOE BIDEN: "And by the way, I might add, I'm the first person to go on national television in any administration and say I supported gay marriage. I supported gay marriage when asked. And so it started a ripple effect. I'm not taking all credit for it, but I'm the first major player to say I support gay marriage on national television." (Joe Biden, Remarks At Democrat Debate, Washington, DC, 3/15/20) 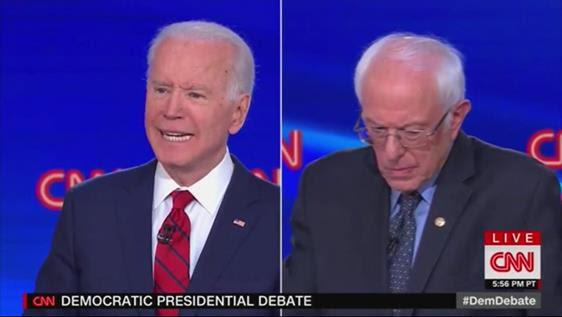 Other Prominent Officials, Including Republicans, Voiced Support And Openness To Same-Sex Marriage Long Before Biden Did 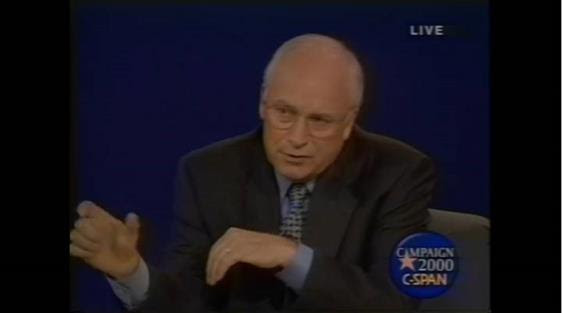 As Of June 2011, The Obama White House Was Signaling It Intended To Back Same Sex Marriage, Nearly A Year Before Biden Endorsed It

In June 2011, The New York Times Reported That The Obama White House Was Already Looking At How Obama Could Announce Support For Same Sex Marriage. "The White House would not comment on whether Mr. Obama was ready to endorse same-sex marriage. But one Democratic strategist close to the White House, speaking only on the condition of anonymity, said some senior advisers 'are looking at the tactics of how this might be done if the president chose to do it.' ... And Representative Barney Frank, a Massachusetts Democrat who is gay, said in an interview that a top adviser to Mr. Obama, whom he would not name, asked him this year, 'What would be the effect if he came out for same-sex marriage?' 'My own view is that I look at President Obama's record, he was probably inclined to think that same-sex marriage was legitimate, but as a candidate for president in 2008 that would have been an unwise thing to say,' Mr. Frank said. 'And I don't mean that he's being hypocritical. I mean that if you live in a democratic society, it is a mix of what you think the voters want and what you think is doable.'" (Sheryl Gay Stolberg, "Obama's Views On Gay Marriage 'Evolving,'" The New York Times¸6/18/11)

In May 2012, After Biden Signaled Support For Same Sex Marriage On An Interview With Meet The Press, Top Obama White House Officials Immediately Sought to Walk Back Biden's Comments. "Despite his record, in several presidential debates this year, Biden questionably claimed that he was the first major political leader to support gay marriage when he unexpectedly broke with Obama during a 2012 interview with 'Meet the Press.' At the time, Obama said he was 'evolving' and wrestling with the issue, and top Obama administration officials immediately sought to walk back Biden's comments in the interview -- including through written statements and tweets. 'Chaos ... erupted inside the West Wing after an e-mailed transcript of the interview landed in the in-box of the White House press team,' according to an insider account by investigative reporter Jo Becker." (Greg Re, "'Security Risks?' Biden's Past Rhetoric On Gay Rights Could Complicate LGBT Claims On Campaign Trail," Fox News, 6/26/20)

Biden's Office Gave A Statement To NBC Saying That Biden Was Speaking On His Own, Not On Behalf Of The Administration, And That Biden "Had Not Fully Endorsed" Same-Sex Marriage. "Biden's office, however, would tell NBC's Chuck Todd, shortly after the 'Meet the Press' interview concluded, that he was speaking on his own and not on behalf of the administration. UPDATE: A spokesperson for the vice president further clarified the 'Meet the Press' remarks, stating in part that Biden had not fully endorsed same-sex marriage. 'The vice president was saying what the president has said previously – that committed and loving same-sex couples deserve the same rights and protections enjoyed by all Americans, and that we oppose any effort to rollback those rights. That's why we stopped defending the constitutionality of section 3 of the Defense of Marriage Act in legal challenges and support legislation to repeal it. Beyond that, the Vice President was expressing that he too is evolving on the issue, after meeting so many committed couples and families in this country.' Biden never explicitly said that he backed marriage equality, but he implied it. The follow-up comments tamping down expectations and reports, from both the vice president's office and Axelrod, underscore just how tricky that implication remains." (Sam Stein, "Joe Biden Tells 'Meet The Press' He's 'Comfortable' With Marriage Equality," The Huffington Post, 5/6/12)